The free festivals on rural squatted land in the 1970's were largely an extension of the London mass squatting movement of that time. The initial participants being mainly rural hippies and London squatters, these events were an extension of a lifestyle organised around resistance to work and living outside the confines of the isolated family structure.

An article from "No Reservations - Housing, Space and Class Struggle", News From Everywhere and Campaign For Real Life, London, 1989.
- A cautionary tale of Stonedhenge, Convoys, Mutoids etc.

Streetlife in general and any large social gatherings other than those directly linked to and mediated by consumption are looked on with extreme suspicion by the British state, and they consciously plan and organise the environment to discourage it. Open spaces such as the public squares in Continental towns and cities where people go to simply hang out, meet and socialise - with no particular consumer activity such as alcohol, music, or sport needed as a justification for being in a large public congregation - are hard to find over here. Increasingly, if you wish to occupy any space, you must buy the right to do so.

The free festivals on rural squatted land in the 1970's were largely an extension of the London mass squatting movement of that time. The initial participants being mainly rural hippies and London squatters, these events were an extension of a lifestyle organised around resistance to work and living outside the confines of the isolated family structure. At first, at least, these festivals were a chance for unemployed people and single parents to have a cheap break from the city. Festivals gave parents and children a safe, spacious environment in which to live more independently of each other, free of many of their usual restrictions such as social isolation in the family unit, the pressure of living in confined spaces and the necessity of constant parental supervision.

The first few annual Stonehenge (and other early) festivals were made up of 200-300 people and the intrusion of the market was consciously kept to a minimum - food was collectively acquired and shared, and those who couldn't pay didn't have to, and what entertainment there was (music etc) was informal and spontaneous - in contrast to later developments. At this stage drugs, which were later central to the festival's economy and social life, were either freely distributed or sold without profit and the consumption of drugs was not so fetishized as it later became. (By citing these positive aspects, it is not intended to romanticise or ignore the limitations of the earlier festivals - in some ways they always resembled self-managed holiday camps or 'leisure colonies' for the poor and marginalized - but just to illustrate their development as one whole process.)

As the festival grew each year, it went on longer, expanded in size and became more and more dominated by market forces. The role of music and bands became elevated to a dominant position, with various stages showcasing rock music competing for attention. The mass of festival goers were reduced by this to a passive audience - the technology of the musicians and stage crew was inevitably beyond their control in the hands of an elite few (access to backstage and onstage was restricted) and the only role left was to passively 'dig the sounds'. The flow of information of general interest became reduced to 'public announcements' monitored through the PA system of the main stage. It was impossible to escape the constant noise of the PA's while on the festival site. All this was accompanied by the appearance of large areas occupied by traders in their stalls and vans selling a variety of goods.

As the summer festival circuit developed in various parts of the country, it became possible to spend the whole season travelling from one event to another, and this contributed to the formation of permanent travelling groups, some of whom in looking for means of survival further developed the festival economy by selling food, drugs, etc at a profit. As these groups multiplied, the press started to mythologise the most combative elements as the 'Convoy', although there had been many travelling groups in existence well before the Peace Convoy itself formed.

By the late 70s/early 80s, young punks were a regular presence at the Stonehenge festival as well as on the London squatting scene. Although punk in general was anti-hippy, the anarcho-punk band CRASS and their influential lifestyle politics was largely an updated extension of the earlier 'hippy' festival and squatting scene of which they'd been a part before their punk mutation.

In the last few years of Stonehenge there were 40-50,000 people attending an event that went on for a month, and the free market ethic became completely dominant; with signposts pointing to dealers of the drug of your choice, it was like a surreal scene from some extreme right-wing libertarian fantasy- an economy with no restraints. Hundreds of thousands of pounds must have passed hands in drug transactions.

It's unclear why the state allowed it to continue and expand for so long, but in at least one instance their motives later became clear; in 1976, after the massive (brutal and controversial) suppression of the 1974 Windsor Free Festival - which was located in the Great Park in the Queen's back garden - Sid Rawles, self-appointed hippy spokesman/politician, negotiated the use of Watchfield, a disused airfield in Berkshire, as an alternative site. As later recounted by one of the cops involved (see 'Busted´ by Detective Pritchard, one of the books written by undercover 'hippy cops' involved in the operation) this festival was used as a starting point for Operation Julie, which succeeded in smashing the major LSD manufacturing organisation in the world at that time.

When the state finally suppressed Stonehenge in 1985 the seasonal economy that the travellers had come to depend on went with it. One faction adapted by moving back to the city and began occupying large empty industrial spaces where they could live and gain an income by charging people to come to cultural/entertainment events that they staged. The Mutoid Waste Company incorporate displays of their junk sculpture into the warehouse parties they put on; like any 'commercial' club, they have bouncers on the door and charge upwards of £5 per head for the use of this squatted space. Like avante-guard art in general, which is commonly a launching pad for what will become most profitable and fashionable, the Mutoids have capitalised on their 'alternative' beginnings - they were recently paid £14,000 to design a Dutch lager advert and had their sculptures displayed at Jean Michel Jarre's Docklands concert extravaganza, including exhibits in the royal box.

The festivals retained all the strengths and limitations of the 'counter-culture' that produced them. While some saw themselves as conscious inheritors of the 17th century Digger experiment in mass land occupation and collective living, co-existing with this were the usual confusions and illusions associated with alternative lifestyles. The retreat of some into such lost causes as mysticism and the escapist use of drugs encouraged the belief that within the confines of the festival site (or even of your own head) a 'liberated zone' had been created.

It's true that for ten years at Stonehenge the cops were prevented from policing the festival and on occasion were thrown off site (the only way left for them to regain control was complete suppression or recuperation) but Capital has more subtle means of maintaining its dominance. The absence of a sustained practical critique of commodity relations led to its inevitable consequences.

The squatted centres that emerged on the London squatting scene at around the same time as the festivals went through a similar process of commercialisation. In both cases the original attempts to reclaim and transform the use of space by freeing it from the dominance of the market were progressively suppressed by market forces reasserting themselves and once more dominating social relations.

Legal activism: the spatial politics of squatting in the UK

SQUASH and Alex Vasudevan discuss the Government's plans to criminalize squatting and the legitimacy of engaging with the state over the proposed change in legislation. By Victoria Blitz and Rueben Taylor, published online October 2011.
Image 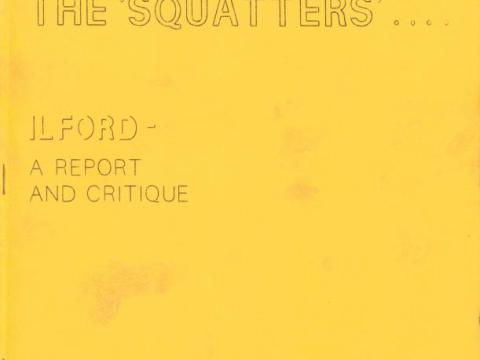 ﻿The 'Squatters'... Ilford: a report and critique - Solidarity

'The 'Squatters'...' was published by Solidarity (South London) in September 1969. No authors name…

Race Today Women on the collective struggles by Caribbean women in Britain. Published in April, 1975.
Image 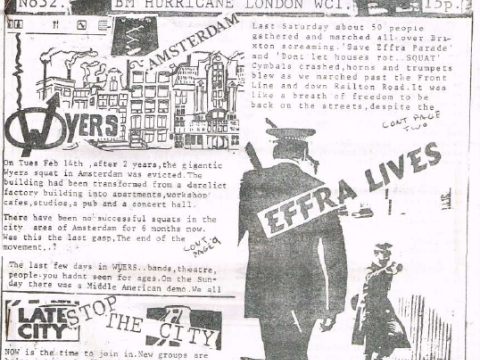 Issue 32 of Crowbar from early 1984. Cropped and compressed from a scan by the comrades at the Spirit of Revolt archive, Glasgow. Contents include: Eviction of Wyers squat in Amsterdam, …