Reprint of 1912 letter to British soldiers that resulted in several people associated with The Syndicalist being given prison sentences.

From Wildcat #1 1974. Text from The Anarchist Library.

The first issue of The Syndicalist reprinted a ‘Don’t Shoot’ letter originally published in The Irish Worker and written by a Liverpool building worker. Then a railway worker, Fred Crowsley, had it reprinted and personally distributed copies to soldiers at Aldershot. He was arrested, tried and sentenced to four months.

The editor of The Syndicalist, Guy Bowman, was given nine months and the printers, the Becks, of Walthamstow, got six. Tom Mann, chairman of the Industrial Syndicalist Education League which published The Syndicalist, was charged, like the others, under the 1797 Act. He wrote: February 1912,

all of the miners had downed tools. In Manchester, where I then was, the authorities were having premises prepared as temporary barracks, and were concentrating military forces a few miles out of the city. At public meetings, I drew attention to this,...I also directed attention to the imprisonment of my comrades, read the “Don’t Shoot” letter and declared I believed in every sentence of it. Thereupon, I was arrested and sentenced to six months!

Tom Mann was released after seven weeks of public pressure.

This letter to British soldiers, reprinted from Sheldrake’s Military Gazette (Aldershot), of March 1, 1912, is the subject of the charge against Crowsley, Guy Bowman, the Beck brothers, and Tom Mann. Read and judge for yourselves. Let the voice of the People be heard!

You are in the Army.

So are We. You in the Army of Destruction. We in the Industrial, or Army of Construction.

We work at mine, mill, forge, factory, or dock, producing and transporting all the goods, clothing, stuffs, etc. which make it possible for people to live.

You are Working Men’s Sons.

When We go on Strike to better Our lot, which is the lot also of Your Fathers, Mothers, Brothers, and Sisters, YOU are called upon by your officers to MURDER US.

You know how it happens — always has happened.

We stand out as long as we can. Then one of our (and your) irresponsible Brothers, goaded by the sight and thought of his and his loved ones’ misery and hunger, commits a crime on property. Immediately You are ordered to Murder Us, as You did at Mitchelstown, at Featherstone, at Belfast.

Don’t You know that when You are out of the colours, and become a “Civy” again, that You, like Us, may be on Strike, and You, like Us, be liable to be Murdered by other soldiers.

“Thou Shalt Not Kill,” says the Book.

It does not say, “unless you have a uniform on.”

No! Murder is murder, whether committed in the heat of anger on one who has wronged a loved one, or by pipe clayed Tommies with a rifle.

Act the Man! Act the Brother! Act the Human Being!

When We kick, they order You to Murder us.

When You kick, You get court-martialed and cells.

Your fight is Our fight. Instead of fighting Against each other, We should be fighting with each other.

Out of Our loins, Our lives, Our homes, You came.

Don’t disgrace Your Parents, Your Class, by being the willing tools any longer of the Master Class.

You, like Us, are of the Slave Class. When We rise, You rise; when We fall, even by your bullets, Ye fall also.

England with its fertile valleys and dells, its mineral resources, its sea harvests, is the heritage of ages to us.

You no doubt joined the Army out of poverty.

We work long hours for small wages at hard work, because of Our poverty. And both Your poverty and Ours arises from the fact that Britain with its resources belongs to only a few people. These few, owning Britain, own Our jobs. Owning Our jobs, they own Our very Lives.

Comrades, have We called in vain? Think things out and refuse any longer to Murder Your Kindred. Help Us to win back Britain for the British, and the World for the Workers. 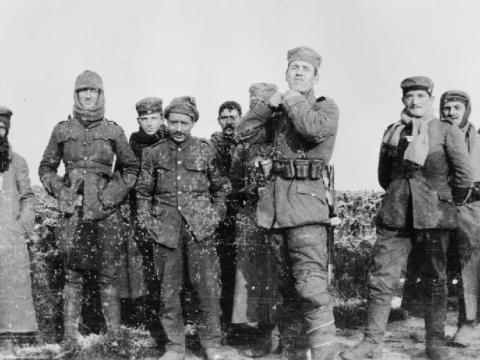