This short essay examines Paulo Freire's extraordinary influence in popular democratic politics in South Africa and in the 1970s and 1980s.

In 1968, revolt, much of it driven by students and young people, rushed from city to city against the global backdrop of the war in Vietnam, the occupation of Czechoslovakia by the Soviet military and the assassination in the United States of Martin Luther King Jr.

In Berlin, Warsaw, Detroit, Mexico City, Chicago, Prague, Kingston, Rio and many other cities, new actors asked new questions of the established order. In May that year, strikes, factory and university occupations and mass street protests in Paris rapidly escalated into an insurrection that left a mark that is still intensely felt in philosophy.

In Cape Town, students, with support in Grahamstown, Durban and Johannesburg, protested against an intervention from the government that forced the University of Cape Town to rescind its appointment of Archie Mafeje to the department of African studies. After discussions in Ginsberg, Alice and Johannesburg during the year, Steve Biko organised the launch of the South African Students’ Organisation (Saso) in Marianhill, outside Durban, in December.

In Paris, many of the police officers sent out to beat the revolt into submission had been soldiers in the colonial wars in Algeria and what is now Vietnam. For many of the young women and men on the streets, the armed Third-World peasant offered a compelling vision of emancipatory political agency, a vision at direct odds with the stultifying leftism of the French Communist Party. One of the thinkers often taken up in this milieu was Frantz Fanon and, in particular, his last book, The Wretched of the Earth.

In Santiago, Paulo Freire, in exile from the military dictatorship in Brazil, was finishing the manuscript of his second book, Pedagogy of the Oppressed. He had arrived in Santiago, via a prison in São Paulo, with an interest in the ideas of the radical Dominican Gustavo Gutiérrez, one of the key figures in the development of liberation theology who had mobilised a theological argument to affirm the immediate dignity of impoverished people.Freire had also arrived with an interest in communist thinkers such as Karl Marx and Antonio Gramsci. But, like so many others that year, he would also be profoundly shaped by the intensity of the international moment.

In an interview in California in 1987, he recalled: “A young man who was in Santiago on a political task gave me the book, The Wretched of the Earth. I was writing Pedagogy of the Oppressed, and the book was almost finished when I read Fanon. I had to rewrite the book.”

Like Fanon, Freire developed a radical humanism committed to the recognition of the full and equal personhood of the oppressed as a pre-condition for emancipatory action, and to a form of praxis predicated on an ethic of mutuality between the authorised intellectual and people who have not had access to much formal education.

Pedagogy of the Oppressed was published later that year and, the following year, Freire was offered a visiting position at Harvard. There he met Anne Hope, a woman from Johannesburg with roots in radical Catholicism. Hope returned to South Africa in 1971.

In the meantime, Saso, recognising that their assumptions about the people as an abstract category didn’t always fit with the realities of people’s own experiences, situations and ideas, looked for a way to rethink the basis for their engagement outside of the university.

Early in 1972, they approached Hope with a request to share her understanding of Freire’s ideas, which she did in a series of workshops.

The practice of listening, formalised as “listening surveys”, became central to a form of radically democratic action that aimed to work towards critical consciousness as a shared project, rather than to announce new versions of what Marx had called “dogmatic abstraction” to the people.

As Strini Moodley explained, this was a politics deliberately at odds with the “indoctrination” typical of more authoritarian forms of political mobilisation. “Indoctrination implies that you have a particular philosophy or value system that you wish to impose upon a people, whereas conscientisation implies that … you believe that it is not for me as an individual to [impose] things upon another individual.”

Biko was in a reading group with Richard Turner, a young academic teaching politics in Durban, who had recently returned from Paris with a PhD on Jean-Paul Sartre. When black workers went on strike across Durban in 1973, Turner, and others at the university who joined him in engaging the new worker militancy, took Freire seriously as a guide to praxis. These democratic commitments were not always easy to sustain, though. Dogmatic and authoritarian forms of politics were always ready to return.

The story has often been told of a survey run to determine who black workers in Durban considered to be their leaders. One of the names returned was Moses Mabhida. When a brilliant young Marxist did not recognise Mabidha’s name he did not take the opportunity to learn, with Gramsci, that the democratic philosopher “not only grasps the contradictions, but [also] posits himself [sic] as an element of the contradiction and elevates this element to a principle of knowledge and therefore action”.

Instead, in a move that is all too familiar in radical circles today, he declared that the survey must be fraudulent, that evidence of a black and proletarian political world beyond his awareness could only have been fabricated. The researchers, taking a very different view of the relation of the university trained intellectual to the lifeworld of the oppressed, stood by their work.

As the 1970s and 1980s wore on, democratic and authoritarian forms of politics were both present in struggles and at times entwined in complex ways. But in workplace and community struggles, commitments to democratic forms of praxis enabled the emergence of very powerful social forces, some of the most impressive on the planet at the time, in which ordinary people often became central protagonists in struggle and the making of history from below.

By the late 1980s, as repression escalated, the explicit commitment to building participatory and democratic forms of popular power as means and end often collapsed into new forms of authoritarianism legitimated in the name of “the people”. There was violent conflict within the struggle for liberation.

This is not an uncomplicated history. But it is, nonetheless, a history that offers, along with a set of urgent warnings, a compelling alternative to authoritarian modes of politics in which, to borrow from Fanon, it is asserted that the revolutionary vocation of the people “is to obey, to go on obeying and to be obedient till the end of time”.

This history has often been occluded by the militarisation of the political imagination that began with Jacob Zuma’s campaign for the presidency, and was later extended by other social forces, including those bitterly opposed to Zuma.

The attraction to strong men promising a strong state may be in tune with an international zeitgeist that offers Recep Tayyip Erdogan, Narendra Modi, Vladimir Putin, Paul Kagame and Donald Trump in response to crisis. But it is very far from a politics that takes listening as the foundational radical act, and the development of the critical capacities and democratic power of the oppressed as both means and end.

The new authoritarianism presents itself in the name of the people and always seeks to substitute itself for the people. But when the rubber hits the road, the men with guns enforcing discipline in the land occupation and the people in black T-shirts enforcing discipline in the university or elsewhere in the elite public sphere are both there to suppress dissent in the interests of a predatory and repressive elite.

The liberal politics of civil society, a politics that is usually elitist, often in a manner that is clearly based on race, sometimes entwined with capital, on occasion implicated in imperial power and, in most cases, constitutively incapable of grasping the nettle of our situation, is not the only alternative. There is also the democratic authority of people organised in and mobilised from the places where they live, work, worship and study.

The real challenge of our moment is to find a way to affirm a politics that is as contrary to the dominant spirit of the age as it is committed to the lives, dignity and wellbeing of our people. In politics, there is never any real going back. The past is always mobilised to contest the present, often with an eye on the future.

But the military dimensions of struggle, with their inherently authoritarian aspects and salvific promise of heroic masculinity, are not the only usable past that we have to work with as we confront the bitterness, dangers and promise of the present. 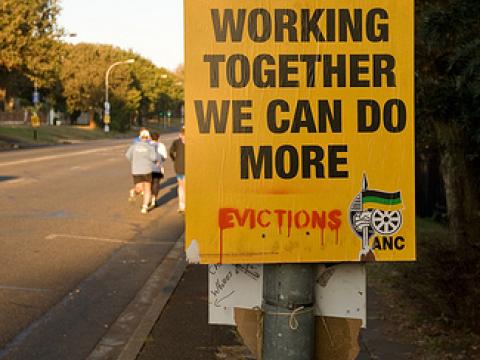 The Degeneration of the African National Congress

A critique of the corruption and authoritarianism within the ANC. 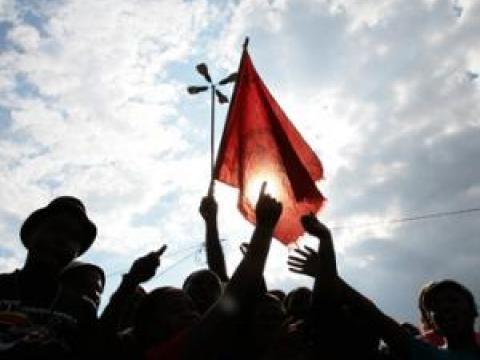 Rethinking Public Participation from Below

A critique of 'civil society' - and left collaboration with it. 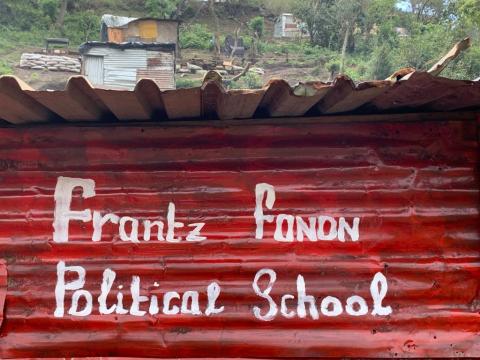 From Durban to the World

On 4 October 2020 Abahlali baseMjondolo celebrated fifteen years of struggle on a land occupation in Durban. This essay describes the day, and…