An analysis on the protests in Ireland and the US from an Irish anarchist.

What are we to make of the global 'Occupy X' movement which has exploded onto the streets of cities across the world, turning public spaces into campsites of opposition? Certain things are obvious: Firstly, the fact that there are thousands of people across the world taking over public spaces to express their anger at the financial system is undeniably a good thing. Having camped out outside the Central Bank on Dame Street on Saturday night, I can also say that these protests exude a positivity and hopefulness that is so often lacking from the ritualistic parades of anger that make up most protest marches. But there are also, in my view, serious political problems that prevent the movement from moving beyond a 'radical sleepover' and becoming a genuine anti-austerity grassroots resistance movement.

The analysis below is based in my own particular experience of the Dame St. protest on the ground and of the US protests as a media event. Obviously any attempt to discuss a diverse and fluid movement like this as a whole can only ever be approximate and reductive. This account is not intended to be comprehensive, but rather to sketch what I see as the major trends and tendencies emerging within the movement, and should be read with that in mind.

The 'Occupy X' movement has since its inception shown an extreme aversion to being seen as political. Some aspects of this, such as banning political party banners, are an understandable pragmatic reaction to the tendency of various Leninist parties to hijack these kinds of events by swamping them with flags, banners and paper-sellers. But the anti-politics of the movement, at least on the part of the organising core and the Adbusters collective who issued the call for the original Wall St. protest, is also ideological: an odd synthesis of post-leftist anti-organisationalism (which sees formal political organisations, trade unions, etc. as being necessarily oppressive) and neoliberal post-politicism (which sees a Left vs. Right contest of ideas as being largely irrelevant after the fall of the Berlin Wall). After decades of neoliberal governance and media spin attempting to drive ideology and politics out of public discourse in order to enshrine the liberal-capitalist consensus as being 'above politics' and to reduce political questions to technical ones best dealt with by 'experts', it is perhaps unsurprising, but nonetheless disheartening, to see this depoliticisation reflected in contemporary forms of resistance.

Most obviously, this has been expressed in the movement's unwillingness to attempt to agree on a coherent set of positions beyond some very basic points of unity with no underlying analysis of society. Instead, the occupied space is used by individuals to express a range of incoherent and often mutually contradictory ideas which are related only by being in some sense opposed to the status quo and the political and financial elites. On Saturday, I spoke to individuals who believe in everything from Rawlsian social democracy, to anarchism, to paranoid crypto-anti-Semitic conspiracy theories (the New World Order, etc.), to Stalinism. Of course, the advantage of this is that it's extremely inclusive - the only requirement to participate is a sense that things are not as they should be and that the financial sector and the state are in some way to blame - but this also means that reactionary ideas are treated the same as progressive ones rather than being robustly challenged. In practice, this means that the ideas that come to the fore tend to be those that are already dominant in society: the ideas of the ruling class. In the US context, the dominant messages from Occupy Wall Street have been liberal, reformist and nationalistic: those that posed the least threat to the establishment. For example, a call to "make Wall Street work for America" amounts to little more than a call for increased exploitation of the Third World as an alternative to imposing austerity. A call to reform banking practice to constrain "corporate greed" is merely a call to stabilise capitalism so that the course of exploitation runs more smoothly. The problem is capitalism, not regulatory failure, or corporate greed or a lack of economic patriotism, and the inadequacies of these analyses need to be exposed rather than uncritically welcomed. The Irish protest seems to be following a similar pattern, with a particular anti-IMF/EU flavour.

The theory underlying this anti-politics, so far as I can gather, is this: no two people experience oppression in the same way, and thus any attempt to unite people under a political programme inevitably ends up erasing some people's perspectives. This is superficially quite a pleasing analysis, since it creates a framework under which all ideas can be understood as equally valid, since they all derive from lived-experience, but it's extremely problematic. Implicitly, it denies the possibility of coming to an inter-subjective understanding (i.e. one based in mutual recognition of shared experiences and understanding of differing ones) of oppression through collective discussion and compromise, and instead collapses into a naive relativism that produces a vague and weak politics, which plays into the hands of those who wish to dismiss the protesters as 'hippies' who don't understand the complexities of capitalism. In any case, it's easy to overstate the case for subjective perspectives and ignore the objective factors that shape experiences: the processes and structures of capitalist domination.

Bring back the working-class!

One of the major victories of neoliberalism is the eradication of the working-class from the popular consciousness. One of the results of this is the prevalence of the idea among certain sections of the left that the working-class is no longer relevant to understanding power in the modern world - an outdated idea clung to by old-left dinosaurs. This is reflected in the idea of 'the 99%' which has become the slogan of the 'Occupy X' movement, which expresses a very crude understanding of class, where the ruling class are an arbitrarily defined proportion of the wealthiest people in society. This makes for some great chanting - "we are the 99%!" - but is a poor criterion for membership of an anti-capitalist or anti-austerity movement. Put bluntly: there are an awful lot of capitalists, bosses, managers, bankers, CEOs, politicians, police, prison wardens, pimps, heroin dealers, etc. in the 99%.

Properly understood, class is not a classification system of individuals based on how much money they have, it's a social relation between people that derives from the organisation of labour under capitalism. In other words, it's the way people are forced to relate to one another in order to participate in capitalist society. Class oppression is not a small cabal of the ultra-rich in Wall Street or Washington or Leinster House, it's in every workplace, every police station, every dole queue, every courtroom, every prison and every territory occupied by Western militaries, and can only be sensibly understood as such.

The radically democratic nature of the occupations creates the potential for the movement to evolve in any number of possible directions. Whether or not they become genuine resistance movements depends largely on how much the radical left are willing to engage with them, and re-assert the importance of class politics in understanding and countering oppression, by participating in the actions, discussions, and assemblies. A key hurdle has already been overcome: people are on the streets, expressing their dissent, reclaiming public spaces; it remains to be seen what comes of it. 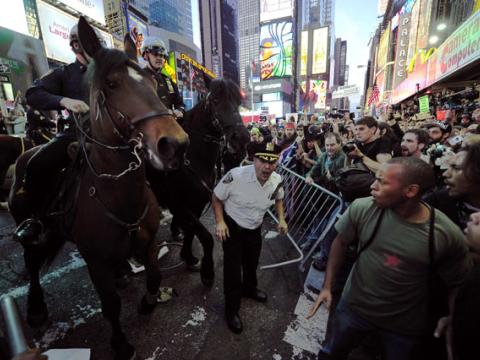 Reflections on the occupations past and future. 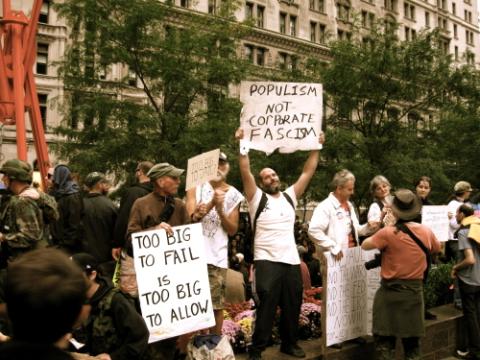 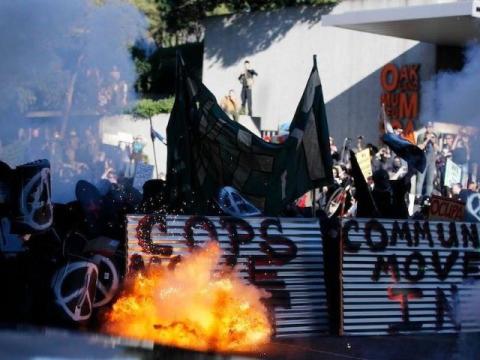 Building the Red Army: The Death and Forbidden Rebirth of the Oakland Commune

A report on the J28 "move-in day" in Oakland by Asad Haider, first published at Viewpoint Magazine. 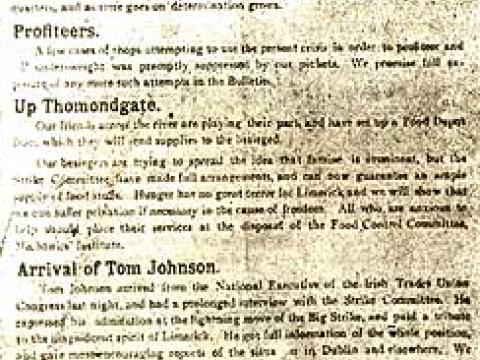 When the red flag flew over Munster

Workers Solidarity Movement's account of the wave of soviets in the province of Munster.