On the present situation in Bangladesh - "state of emergency" declared.

The political climate in Bangladesh remains as violent and unstable as ever... but has electoral politics, for the moment, derailed workers' struggle? RM investigates.

After a year of intense nationwide class struggle in 2006, (see our previous reports here) for the last 3 months Bangladesh has been in a different kind of turmoil. Media sources give the impression that the class struggle has been largely submerged by political conflicts between the ruling Bangladesh National Party (BNP) bloc and the Awami League-led opposition alliance, as they jockey for position in the run-up to the General Election (now postponed). The opposition has led several large blockades of major cities - involving strikes, riots, transport stoppages - as a political lever to influence the composition of the Election Commission overseeing the voting procedure; appointments by the BNP were challenged and some eventually overturned as being too favourable to the ruling party. The updating of the Electoral Register also remains a source of major conflict, with disputes over dead persons fraudulently registered to vote etc. 35 people have died in the street clashes; in one incident TV cameras captured the public lynching of several rival activists by Awami League militants.

Clampdown, meltdown?
Yesterday (Thurs 11th Jan) BNP President Iajuddin stood down as chief of the caretaker government - though he still retains effective control and has now declared a countrywide state of emergency/martial law in a bid to restore order amid the opposition protests and disruption of the economy by their political blockades. Curfews (11pm -5am) and roadblocks were last night established, and police and army control the streets. A gagging order was also issued by a government "official of the Press Information Department (PID) to the TV news channels and the press not to print any news, pictures and cartoons and editorials critical of the present government". (Daily Star, 12/Jan/07) The President stated he still looked forward to resolution of political differences and eventual "free and fair election to be participated by all political parties". But the UN, EU and Commonwealth have suspended their election monitors, seeing little imminent chance of this; and the President said today that, due to problems with the Electoral Register, elections set for January 22nd are now not likely for some time. The prospect of indefinite turmoil, possibly leading to a bloody civil war, becomes a stark, if not immediate, possibility. The southern port city of Chittagong is a well known centre of the illegal arms trade; the main political parties all have affiliations with the arms 'godfathers' dominating the business. Smuggled weapons are plentiful in the local bazzars and the city also contains several underground arms manufacturing workshops.

Lawyers trash court!
The political divisions run right through the Bangladeshi ruling class: in late November pro-Awami League lawyers attacked the Supreme Court building, damaging courtrooms and the chief justice’s chamber. The car of a former state minister of law, parked on the court premises, was also set on fire. 12 Supreme Court lawyers were later charged with vandalism. This attack was a response to perceived pro-government bias by the higher judiciary. Legislation enforcing separation between government and judiciary had been stalled by pro-government legal factions, led by the Chief Justice. A retiring High Court judge this week commented on the blatant political corruption of the legal system; “I have seen during my long 13 years in judicial career how the evil partisan political influence engulfed the sacred institution..." (Western democracies are generally more subtle, and therefore more stable, in their means of control.)

Politricks?
Now that the Awami League has achieved many of its gains and the Election remains the central issue, the murky corruption of Bangladeshi politics becomes more open - the smaller parties in both rival blocs begin to complain they have been short-changed by the leading parties by the small number of nominations they have been allocated. There has been much argument about nominations, with the judges ruling in their political masters' favour; "...on December 20, the Appellate Division of the Supreme Court stayed [halted] the operation of the High Court’s verdict that made it mandatory for parliamentary candidates to furnish their educational status, criminal records, if any, statement of assets and sources of income while filing nomination papers." The situation would be little different with the equally-corrupt Awami League in power.

The four major political parties of Bangladesh on the basis of the 2001 general election are BNP, Awami League, Jamat-e-Islam and Jatiya Party (E). The first and the last named hold almost identical views and manifestos although they are in the opposite camp at the moment. ... They represent bourgeoisie character and pursue open market policy, Islamic values, not Islamic state, and Bangladeshi nationalism.

Jamat-e-Islam strives hard for a welfare state based on the model of the Republic of Medina during the time of the Prophet (SM). This party discards secularism but nurtures religious tolerance. On the contrary, the Awami League tracks open market economy, secularism and Bangali nationalism, ignoring the existence of the several lakhs [hundred thousands] tribal people. This party is also of bourgeoisie character and stresses on the warm relations with India.

Of the remaining parties, the Communist Party of Bangladesh still dreams of a socialist state while the other Islamic parties eye on a conservative state, however, without detailing. (New Nation, 10/Jan/07)

Or... class struggle
It's hard to tell if local reporting has just largely ignored class struggle in the run up to the election or if the violent political party rivalry dominating Bangladeshi society has simply limited the class struggle. Maybe the poor are waiting to see how the election plays out before taking any more decisive moves. Certainly the garment workers remain in dispute with the RMG (Ready Made Garment) bosses - the concessions promised after the mass workers revolt of May 06 have not been delivered. There have been occasional reports of strikes and violence; On Tuesday this week there were clashes in the Dhaka RMG zone between workers and factory security thugs, leading to walkouts (libcom.org coverage here). Jute mill workers in Kulna were also again on strike at the end of December, as they have been regularly over the past year:

Workers "removed railway slippers and damaged hoardings and shops during a blockade of highway and railway in the industrial belts of Khalishpur, Daulatpur and Atra in Khulna on Friday, the fourth successive day of their programmes to push for their demands.
The mill workers under the banner of the Khulna-Jessore unit of the Jute, Yarn and Textile Workers and Employees’ Acton Council have been enforcing the non-stop blockade from December 26 to push for their eight-point charter of demands.
The demands include payment of all dues and festival bonus, reopening of the closed mills, abolition of all anti-labour laws and placement of sufficient funds by the government at the mills for the purchase of raw jute.
The mill workers removed some railway slippers at three points and set them on fire near Natun Rasta.
They damaged a number of hoardings at Khalishpur and Daulatpur where they also battered the shutters of many closed shops.
The mill workers barricaded nine kilometres of the Khulna–Jessore Highway from Baikali, disrupting traffic.
All types of transports stayed off the main road in the Khalishpur industrial belt and neighbouring areas. No trains could leave the railway station."(New Age)

With limited information, the picture is necessarily confused. Both workers and bosses have complained about the political blockades; bosses lose profits and workers lose wages by being unable to work. This is particularly serious for a workforce who live largely hand-to-mouth, barely receiving a living wage. Prices of basic commodities have risen consistently recently, partly through hoarding and speculation by suppliers, increasing hardships of the poor. The Awami League has opportunistically organised several 1 day 'general strikes' on popular grievances such as price hikes. To what degree workers' participation in such actions is simply a convenient way of expressing dissatisfaction or if it extends to some expression of support for the opposition alliance is, at this distance, hard to judge. The political blockades also sometimes make it impossible for workers to get to the workplace. But in all their most radical actions of the past year - from the mass revolt in the garment industry, the Phulbari mass uprising against a proposed open cast mine project, numerous other strikes and riots against attacks on living standards of the poor - the Bangladeshi proletariat have shown themselves quite capable of a high level of autonomous self-organisation. 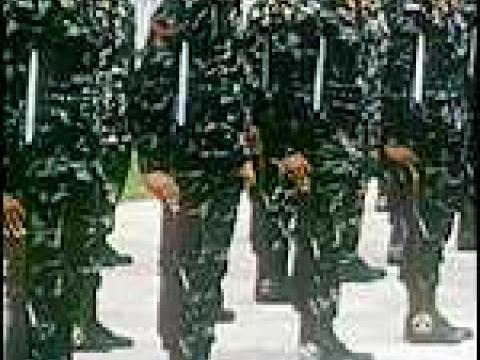 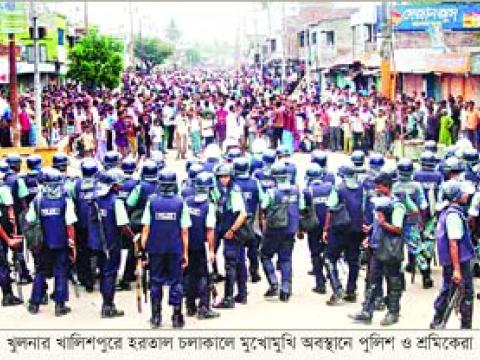 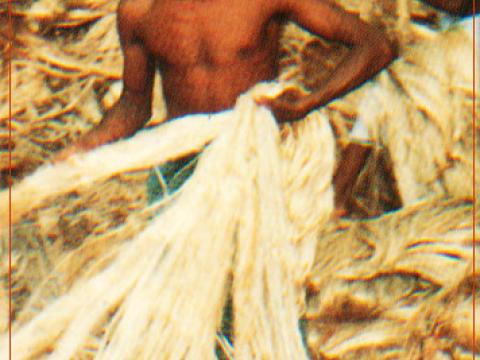 After Thursday's clashes, in which revised figures tell of 200 injured and one worker dead, the strike continues and tension remains high in…