Thesis of Workers' Opposition member, Alexander Shliapnikov, given at the ninth Bolshevik Party congress in March 1920.

In it he argues for increased democracy within the party and for more control of the economy to be handed over to the unions.

1. The three-year experience of the Russian Revolution shows that the single force consciously fighting for the organization of society on communist foundations is the Proletariat.

2. The rural commodity producer, likewise the poor peasants and middle peasants, and also the urban artisan have supported the proletariat in its struggle against the landowner and the large capitalist, but since according to their position they are property owners their support has been found, and is found now in a state of constant fluctuation. Only the direct threat of a relapse to the past has restrained and is restraining these masses from direct betrayal of the cause of the Proletarian Revolution.

3. As a privileged estate in Russia in relation to the repressed worker and peasant masses, the intelligentsia, throughout imbued with the ideas and system of the ruling exploiter class, has met the emancipatory struggle of the Proletariat in an openly hostile manner, has refused any cooperation with it and in a significant part went over to the side of the counterrevolution. Only thanks to long and tenacious struggle has the Proletariat succeeded in attracting part of it to participation in construction.

4. In the process of armed struggle and creative construction the Working class has been defined as the only class, capable of managing industry and the state, and likewise to defend its homeland in an organized manner from class enemies.

5. In its struggle the Proletariat has created three forms of political and economic associations:

2) Soviets of Workers and Peasants,

7. The R.K.P. unifying the more conscious and decisive part of the Proletariat around the Revolutionary Communist Program of action and drawing to the Communist banner the more leading elements of the rural poor, must concentrate all higher leadership of communist construction and the general direction of policy of the country.

8. The RKP, being in power, must realize its superior leadership through its local committees and cells, but by no means over their heads. All decisions in the area of management of the country and the national economy the party must realize and put into practice through mass organs created in the process of revolution: The Congresses of Soviets, the All-Russian Central Executive Commission of the Soviet (VTsIK), local councils of the All-Russian Central Council of Trade Unions, production associations and local councils of unions

The Soviets
9. The Soviets of Workers and Peasants, and likewise their congresses, created by the revolution, have turned out to be the only form of political union of the urban proletariat with the poor of the countryside. As organs of political power, the soviets serve as guides of the dictatorship of the Proletariat and realize it in practice.

10. Soviets, as organs of centralized system of power manage the country by a path of direct participation of all laborers, with direct responsibility and accountability of all organs of power before the elected representatives of the workers and peasants.

The Unions
11. In the process of struggles for the seizure of industry and management of it, the Russian proletariat created numerous associations of workers in the form of production unions, unifying all workers occupied in production without exception.

12. Production associations, in the countenance of all their unions, central committees and the All Russian Central Council of Trade Unions recognize for the RKP political and economic leadership, reject the independence of the Trade union movement from the political party, under whichever slogan this would be carried out (equality, self-sufficiency, anti-stateness, and so forth).

13. The program of the RKP in part concerning the emancipation of the trade unions from a narrow guild mentality has been fulfilled. The whole Trade Union Movement is included in the production framework. All workers, independent of their professions, are members of the unions.

Interrelations
14. For 2 1/2 years of the existence of the dictatorship of the proletariat the following interrelations have been traced between the above indicated mass organizations of all laborers: 1. The RKP is the sole responsible political leader of the revolutionary struggle in construction of the worker and peasant masses. 2. The soviets have become the sole form of political power in the country. 3. The unions are the sole responsible organizers of the national economy and are a school for the workers in the management of the state economy.

15. In the process of common work, these basic lines, defining the borders of activity and responsibility of each organization, have been demolished. The decrees of the organizations have become intertwined, have hampered and disorganized work and harmfully reflected on the success of the common cause. These circumstances urgently demand the definition of the boundaries, of character and order of work of all organizations numbered above.

16. This order will be to a significant degree resolved by a path of establishment of rights, obligations and order of work of the Central Committee of our party.

18. In accord with the meaning of the 24th point of the regulations of the RKP the CC must realize the leadershp of the central soviet and social organizations by means of the fractions of the latter. In such a way the leadership of external and internal policy, the CC of the RKP realizes through the VTsIK and its organs.

19. In the economic area the CC of the RKP must firmly and decisively carry out the program of the party, especially in part, demanding the transfer of the management of the entire national economy of the republic to the production associations.

20. The CC RKP must carry out the program of industrial construction through the production worker asssociations or their All-russian center. In the area of worker policy the CC takes decisions with the direct complicity of the leading center of the Trade Union Movement.

21. All mass organizations and organs of power, created by the revolution, the CC must support with all its strength its authority and must not assume their functions. Work of the VTsIK, as the supreme organ of the mass managment of the republic, must be placed at its proper importance. The same in relations of local soviets and executive committees.

22. The CC is obligated to lead the work of local organizations, encouraging at the same time all kinds useful party initiative, as in the Center, as on the local level. The leadership must be produced by a route of giving clear, definite directives and instructions and must not descend to petty intrusion into the life and activity of the organizations.

23. The CC must carry through directives of the Congress and conferences about the workerization of organs of state management not only according to form by a path of inclusion of individual workers in collegiums, but also in essence, bringing into the organs of management mass worker organizations, in the spirit of the program of the RKP.

In the first place these measures must be carried out in the area of management of the economy of the Republic – Industry, Transport, Provisions, agriculture and so on.

24. At the given moment the distribution of party forces has especially important significance. The CC must especially carefully relate to this matter, conduct a registration and characterization of all workers, accept into the system a systematic distribution of them in all branches of work.

Candidates, proving by their activity dedication to the revolution must be nominated to responsible political posts. Elements hostile to the working class in the past may be merely clerical staff, but by no means responsible leaders of government institutions.

25. Under the carrying-out of the program of the party on the question of use of the cultural inheritance of the bourgeoisie, in the form of specialists of various brances of science, technology and art, the CC must carry out this utilization through the corresponding associations of workers. Only by the path of direct cooperation with the workers, specialists, people of science can be completely and expediently utilized. The detachment of them into a privileged ruling caste, in spite of and against the will of the workers unions is capable of developing, patronage, adventurism and a striving to use such a position in interests alien to the workers revolution. The government must place this layer of workers in material conditions, promoting the manifestation of full efficiency and initiative.

26. The inefficiency of the central governing organs , the flourishing of bureaucracy and sabotage there witness to the incapacity of the organizational part of the CC to cope with the tasks of direction of activity of these institutions. The CC penetrating into trifles, as for example: the distribution of apartments, rooms, payment on the accounts of the suppliers, assignation of superintendents of buildings and so forth, could not master the more important apparatuses of power, as for example: Narkomprod, Narkompros, Narkomput’, Goskontrol’, Narkomvoen and others, located practically in hands alien to the interests of the working class.

27. The history of party work of the last year has proven, that the present staff of the CC are not capable of conducting complex party government work. Therefore before party comrades stands the task: at the approaching Congress of the RKP to put together a more efficient CC. In the interests of realization of the policy of workerization of the organs of state management, this workerization must begin with the Central Committee of the RKP.

28. In the aims of protection of the party from the rush into it of alien careerist elements and so forth, and likewise in the interests of straightening out the revolutionary line in the provinces, it is necessary to set up contacts between all workers, old party figures. At the ninth congress it is necessary to put forward a maximum of party workers. 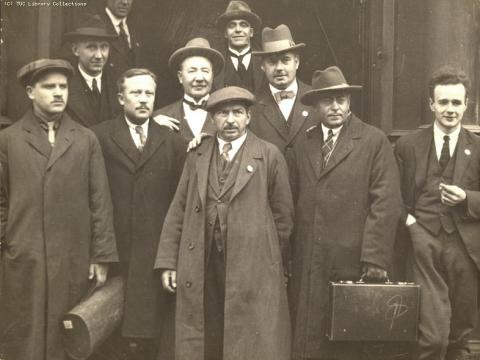 Original thesis of the Workers' Opposition group within the Bolshevik Party, arguing for greater… 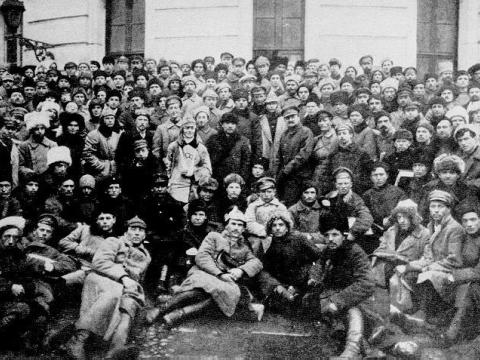 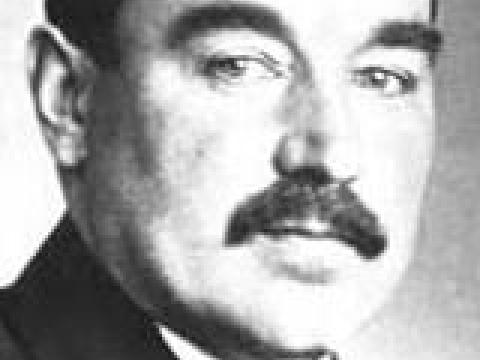 Biography of working class Bolshevik, Alexander Shliapnikov, active in the Workers' Opposition movement who was eventually purged from the party… 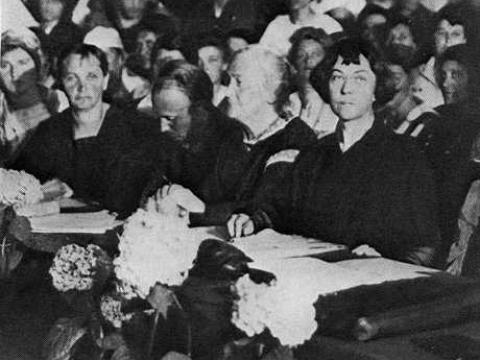