A short biography of Oscar Scarselli, Italian anarchist forced to flee to Russia.

Oscar was the son of Eusebio Scarselli and Maria Mancini, and brother to Ferruccio, Tito , Ines Leda Egisto and Ida, an anarchist family from Certaldo in the Florence region. Biographies of some members of this family have already appeared here on libcom. He was born on July 14th, 1902.

Oscar worked as a labourer and like other members of his family, was a member of the Unione Anarchica Italianiana (Italian Anarchist Union).

Oscar took part in the revolt on February 28th, 1921 in Certaldo which led to the death of his brother Ferruccio. To escape the ensuing repression, he and his brother Tito as well as Guido Nencini, Alfredo Veracini and others, went into hiding and formed the Bande dello Zoppo (Band of the Lame) because of Oscar’s limp. This conducted actions against the fascist squads across five provinces of Tuscany.

When the group disbanded in June 1921 Oscar and Tito escaped into Switzerland on July 5th, 1921 but were immediately arrested and extradited to Italy on August 28th.

Oscar spent the next three years in the Volterra Keep, from which he escaped on the night of 4th-5th October 1924, together with the anarchists Giuseppe Parenti and Giovanni Urbani. This daring escape aroused great admiration in revolutionary circles. It involved a dscent from an eighteen metre wall. Thanks to an underground network, the fugitives were able to get to Emilia Romagna. From there they crossed the border into France. Meanwhile on May 1st, 1925 the Florence judges sentenced him in absentia to 30 years imprisonment and 10 years of special surveillance for triple murder and the transport of bombs.

Oscar moved from Marseille to Lyon. Here he was aided by Alfredo Bonsignori, later to fight in Spain, and his partner Corinna Michelotti. From there he moved to Paris and then Belgium. Here he lived in Brussels and then Charleroi, aided by Belgian antifascists. On 12th May hew was given an additional in absentia sentence of 4 months and 20 days by the Volterra magistrates for his escape. Bocchini, the head of the Italian fascist police ordered a “maximum effort” to apprehend Oscar. He was described as of medium height, with brown hair, blue eyes and a lame right leg. Bocchini feared that Oscar was attempting to re-enter Italy to kill Mussolini.

He was spotted in Paris by Italian spies in May 1927 but then returned to Belgium. In the following weeks he moved to Russia, where he joined his brother Tito, who had himself made a sensational escape from a train during a transfer of prisoners.

They sent money to their sister Ida and their brother Egisto, imprisoned or confined for their anarchist activity. Some of this money was seized by the fascists.

Oscar worked as a plasterer and concreter in Yalta, where he lived with Tito. From there Oscar moved in 1929 to Kerch, where he worked in the Zerabcoop (Central Workers’ Cooperative).

In 1931 Oscar became father of a little girl, whose mother may have been Russian. On April 20th, 1932 he wrote to his sister Ines Leda that he had not heard from Tito for a long time, and that things had worsened in Russia since the previous autumn, “we hope that the new harvest will make us forget these days and a new horizon of normality opens up, plus the four-year reconstruction plan ends ”. In May 1933 he was living in Moscow, where he enjoyed "special consideration" among Italian exiles "for his subversive past". On June 4, 1934, he wrote from Ervkim to his sister Ines Leda that he led “ a humble and mean life, devoid of all vivacity...” and that his health was not good. He reported that Tito had been dead for a year and a half. “I received the telegram that he was dying but I was unable to see him, I was informed that he was the victim of a work accident. This is all I know. I left Tito in 1931, he too was very thin… ".Apparently Tito died after a car engine he was working on exploded.

On April 26th 1935, Bianca Bracco, wife of the Communist Lorenzo Gatti, who had been in Russia for a few years, was interrogated by he fascist authorities in Sanremo. She reported that she had met the Scarselli brothers there. And that Oscar “makes propaganda against Russia so much that I think he will be arrested some day”.

In 1937 Oscar was working in Teodosia in Crimea, where he led a secluded life. With the Nazi invasion and Operation Barbarossa he was taken to the Italian consul in Odessa in October 1942, where he provided false details, saying that he was married to an Alexandra Gusseva and that he had emigrated to Russia in 1911. It appears that his wife and daughter were murdered by the Nazis.This was found suspect by the Italian authorities. Realising this, he made his escape. On November 6th, 1942 he was identified by the fascist prefect of Florenceand that he was a dangerous element that should be apprehended and transferred to Italy.

The last trace we have of Oscar is from 1947 when he submitted a passport application to return to Italy at the Italian embassy in Moscow. There was no follow up. In the late 1970s the Italian Ministry of the Interior asked the Florence police whether "Oscar Scarselli, resident in Russia, has returned to his homeland ". Obviously the Italian authorities still regarded Oscar as a “dangerous element”. The other trace of Oscar comes from a cousin who stated : «Oscar wrote me that his family had been killed by the Germans, and when he was alone he felt so much nostalgia for Italy and asked if he could return. I went to the town hall and talked to the mayor Nencini and his son. They said to me: “Those are people who are well away. After all, they were convicted not only of political crimes but also of other acts ". 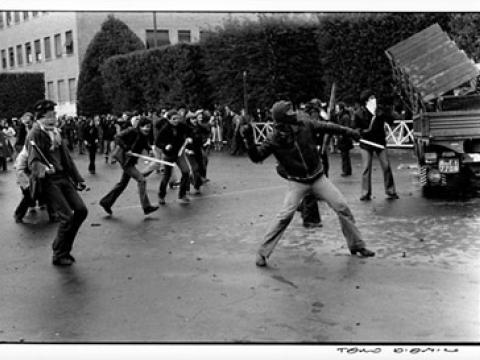