A Second Letter To Malatesta

In response to A Reply to Makhno

I waited to read a Russian translation of your letter before replying to you in turn. In your letter you say that before getting into an argument, something I might say I had not thought to do, you would like me to set out my ideas on anarchism. I will therefore explain these ideas and, at the same time, the causes to which I attribute the weakness of our movement.

As any anarchist, I reject authority in general, I am an adversary of all organisation based on centralism, I recognize neither the State nor its legislative apparatus, I am a convinced enemy of bourgeois democracy and parliamentarianism – considering this social form to be an obstacle to the liberation of the workers – in a word, I rise up against any regime based on the exploitation of the workers.

So, anarchism for me is a revolutionary social doctrine that must inspire the exploited and oppressed. However, in my opinion, anarchism does not at present possess all the means it requires to carry out even one social action; hence the swamp in which we find ourselves. And we will not be able to remedy the situation by remaining as we are now.

We can understand as much as we like; as far as I am concerned, I believe that anarchists must not be afraid of abandoning their traditional opinions when drawing the logical conclusions that derive from the thinking of our theoreticians. For example, one question arises. Does anarchism – and consequently the mass of revolutionary workers – need to envisage permanent organisations that can guarantee the useful social functions that the State currently takes upon itself, organisations that must be a tool with which practical policies consistent with the anarchist ideal can be established? Or is this the role of the workers’ syndicates and agricultural co-operatives or of others that, in their current form, are ideologically influenced by the sort of anarchist action groups that exist today?

I am inclined to believe that once this primordial question has been resolved by anarchists, other problems of equal importance will face our movement.

In particular, anarchists must fully grasp what Kropotkin intended with the expression “common law social institution” in order to be able to determine, concretely and in a manner adequate to our times, the nature of these institutions whose relationship with anarchism has no need to be proved.

These deductions will be of the utmost importance, not only for the revolutionary masses in general, but also for anarchists in particular, as let us not forget that 90% of us have never considered these questions; since neither Malatesta nor Faure nor any of our old comrades has dealt with these problems and say nothing about the deplorable state of our movement, these comrades are left to deduce that everything is fine and that anarchists are ready to play their indispensable destructive and constructive role in the revolution of tomorrow. However, the reality is entirely different: year after year our movement loses more and more influence among the workers and, consequently, it gets weaker. It is true that certain theoreticians “in our Russian circles in particular say that anarchism’s strength lies in its weakness, and its weakness in its strength”, so there is no need to worry if anarchist organisations lose their influence… But on closer examination, this statement is seen to be entirely stupid, it is simply an evasive formula designed to mollify the chatterboxes when it comes to explaining the real state of anarchism.

I believe that a truly social movement, such as I conceive the anarchist movement to be, cannot have positive policies until such times as it has given itself with relatively stable organisational forms that can provide the various means that are required for the struggle against the different authoritarian social systems. It is the absence of these means that results in anarchist action – above all in the revolutionary period – degenerating into a sort of local individualism all because, in declaring themselves to be the enemies of “all constitutions”, anarchists have in general seen the wide masses move away from them, as they inspire no hope of any sort of practical achievement.

In order to struggle and win, we need tactics whose nature must be expressed in a programme of practical action. Only when anarchists have such a programme will they be able to rally the exploited masses around them and prepare them for the great revolutionary battle with an equally great chance to achieve a radical social transformation.

But, let me repeat, such a test cannot be attempted without a permanent organisation. Believing that today’s propaganda groups will suffice for this revolutionary task is an illusion. In order for any social organisation to play a role, it must be known by the popular masses before the revolutionary process begins its course.

So then, instead of spending their time rejecting left, right and centre, I believe that anarchists would be better occupied getting to grips with what they do want and proposing something realistic to the workers, in place of all the things they reject.

Then, and only then, will anarchists be able to expect with good reason to fill the role that they would take upon themselves, that is to say the “vigilant guardians of liberty against the power and against the tyranny of the majority, should it arise”.

Unfortunately, as things stand anarchism is strong only in its philosophy. It lacks practical means. It is unable to manifest itself completely, even in times of revolution, and those spontaneous movements with an anarchist spirit that do appear, seem to the eyes of the wide masses to be merely desperate attempts. And that only goes towards making anarchism’s tragic state even worse.

You ask if the way I conceive the role of anarchists before and during the revolution is the same as your view, as set out in your reply. By way of answer, I would say that I am in total agreement with you as regards the role to be played, but I believe that such a role can only be played successfully when our Party is ideologically homogeneous and unified from the point of view of tactics, something which is not the case at present. Experience teaches us that anarchist action on a wide scale will only achieve its goals if it possesses a well-defined organisational base, inspired and guided by the principle of the collective responsibility of its militants.

“How do you wish to guide the masses?”, you ask. In reply, I would say that, during the course of events, every social movement, especially every revolutionary movement of the wide popular masses, is required to formulate certain proposals designed to help the intended goal be achieved. The mass is too heterogeneous to be able to do this. Only ideological groups with clearly-defined policies are capable of driving this process, particularly towards the beginning of the revolution. Only they will be able to throw enough light on events and clearly define the unconscious desires of the masses, and setting an example through actions and words. It is for this reason that our Party must, in my opinion, make clear its political unity and organisational character. In the domain of practical achievements, the autonomous anarchist groups must be able to face up to every new situation that presents itself, in establishing the problems to be resolved and the responses to make without hesitation and without altering the goals and the spirit of anarchism.

Nestor Makhno: A Theoretician of Anarcho-Syndicalism?

A short piece reflecting on the Anarchism and Syndicalism section of the Organizational Platform of the Libertarian Communists by Makhno and co. Also riffing on the 19th and early 20th century anarchist workers' movement. 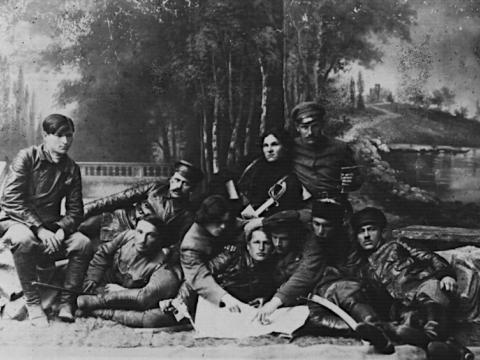 A Communist Left Critique of Platformism (Part I): The Makhnovshchina