A short history of puppets, puppeteers and working class politics from the English Civil War to the streets of Seattle in 1999.

The ‘carnivalesgue’ has often been a feature of popular rebellion. Recently we saw its self-conscious re-emergence in the US and the UK (notably on Reclaim the Streets actions). Masks, fancy dress and puppets perform a dual role, providing both a pleasurable escape from the routines of everyday life and means of disguise.

"Puppets are not cute, like muppets. Puppets are effigies and gods and meaningful creatures"- Peter Schumann, Bread and Puppet Theatre

To think that at one point in European history, puppetry was actually condemned as a harbinger of sedition from the lower-classes is a fantastic concept for anyone who sat through the HowdyDoody or Muppet shows.

The fact is, the real history of puppetry has been repressed in its long course of commercialisation, and a tradition that once catered to the poor has been devalued and discarded.

However, the last few years has brought renewed interest in puppetry. One of the most important reasons for this is the medium’s use of the public sphere. As we are dragged into the realm of the corporate ownership of everything, the public sphere is of tremendous concern for anarchists and anyone else who cares about freedom. Public space is now rented out to the highest bidder, which means that new forms of protest must be used in order to preserve one of our last recourses to real democracy. Puppetry is a tradition that is about politics within a public sphere; it is about expressing views which counter those of the corporate, religious, and governmental structures, not only by what it says, but how it says it.

Beginnings
Puppetry’s subversive political role effectively began in revolutionary 17th century England with the most famous puppet character of them all, Punch. Punch was a popular figure in a country reeling from tremendous social upheavals.

In 1643, the English authorities ordered the theatres closed due to their fear of the spread of revolutionary propaganda. England was about to be plunged into the middle of a civil war, and radical elements such as Winstanley’s Diggers and Albeizer Coppe’s Ranters were already active.

The country was in the midst of a brutal transition to industrial capitalism, which would destroy the commons and in the process, the peasant’s livelihoods. Puppetry was seen as a way of getting around the theatre ban and accusations from both clergy and out-of-work actors, raised concerns about the medium’s "corruption" of audiences. Perhaps they were right: Punch certainly was a corrupter.

This hunchback, with his large, hooked nose and insanely boorish manners, was a hero of the lower-classes. Punch broke the most sacrosanct laws imaginable in a time when conformity was imposed in every sphere of life, particularly entertainment. He mocked the law, God’s and king’s, and, by avoiding hanging, managed to trick even Death. As George Speight tells us in Punch and Judy: a History, Punch was a subversive jester, "the simpleton who could answer back to Bishop and King, the fool with the license to poke fun at anyone."

18th-century France had its own "Punch," which went by the name of Guignol. Guignol shows were "decidedly populist" and "off the cuff political comments slipped into the dialogue every evening’ according to John McCormick and Bernie Pratasik in Their Popular Theatre in Europe, 1800-1914.

Saxony banned puppet shows in 1793, and by 1852, the French government was demanding texts not only be committed to paper (a death knell for -an oral, and to some extent, illiterate tradition), but banned improvisation of any sort. Puppetry was particularly controversial in Lyon, a hot spot for revolution. One of the last uprisings there, involving poverty-stricken weavers and miners, led to Kropotkin’s imprisonment and expulsion from France in 1888. According to McCormick and Pratasik, "Napoleon Ill’s police state was particularly nervous about places where numbers of people gathered together," so Guignol shows were placed under surveillance. Many new applications to perform Guignol were rejected outright. In a city once known for its puppetry culture, Lyon’s puppeteers were denied an audience.

Criminalising puppeteers
From its beginnings, radical puppetry was treated as a criminal act. Both England and France enacted repressive laws against puppeteers, refusing to even license them like other performers and trades people. This relegated them to, in the performance hierarchy, a level lower than showmen.

Being itinerant, puppeteers were regarded with suspicion and accused of not only participating in crime, but of perpetuating it by attracting crowds of poverty-stricken individuals to respectable places of business. Although they were harangued by the authorities and merchants, the puppeteers were determined to engage in their livelihood, performing where they had to in order to make even a small income. They would pitch their stages in busy marketplaces, inevitably being forced to move on.

Subversion
In the tradition of subversive theatre, the 19th century’s most notorious figure was the incomparable eccentric, anarchist puppeteer, Alfred Jarry. Known for carrying a pistol around with him as he obsessively bicycled through the streets of Paris, Jarry amused friends with his intellect and outrageous behaviour.

Enamoured of puppetry since his teens, in 1888, Jarry put on shows in his mother’s attic for Henri and Charles Morin, his future teenage partners in crime at the Lycee they attended. It was here that the first versions of Ubu Roi were performed, Jarry’s infamous, brutal attack on bourgeois mediocrity. Ubu Roi achieved instant notoriety for many reasons, not the least of which being the first word King Ubu utters on stage is "Shit!"

Although in the eventual staging of the play Jarry used human actors, he designed Ubu’s costume and choreographed the stage directions to be as puppet-like as possible. The anti-colonial, anti-militaristic tone of Jarry’s writings are quite evident, as are their anti-establishment "primitivism" (by way of puppets), a popular strategy among dissidents, artists and anarchists at that time in France.

Czechoslovakia, now an undisputed leader in puppetry, began its saga in the nineteenth century. The Czech language was banned by the Austrian-Hungarian Empire, but puppeteers performed in Czech as an act of defiance. During the Nazi invasions, puppeteers resisted, despite the forced closing and banning of literally hundreds of theatres. Anti-fascist plays by Karel Capek were staged in underground venues along with theatrical interpretations of modern poetry. During public performances, they used allegory in order to slip subversive (and with audiences’ expectations, anticipated) remarks past the censors.

Radical puppetry now
Radical puppetry today is reclaiming public space for the disenfranchised. Although this space has been co-opted since the turn of the century in order to serve capitalist/military/government masters, puppet shows conversely use the it for anti-authoritarian ends.

The philosopher, M. M. Bakhtin, has written on the concept of "dominant discourse," the way in which the beliefs of the ruling classes are framed as fact in the public sphere. Bakhtin is also credited with having coined the term "carnivalesque" to describe the way popular culture, like carnivals, parades and puppet shows can transgress authority.

Radical puppetry groups, such as The Bread and Puppet Theatre, and Art and Revolution, operate in this carnivalesque vein. Both reclaim the public sphere by involving their audience in the performance which demolishes the idea of passive entertainment.

Bread and Puppet Theatre was a child of the ‘sixties and the peace movement, and initially concentrated the bulk of its efforts protesting against the Vietnam war. The founder of Bread and Puppets, sculptor Peter Schumann, has maintained his fantastic ‘Domestic Resurrection Circus’ for over thirty years. Schumann and members of his theatre utilise almost every kind of puppet, from hand puppets to huge street sized puppets, in order to present their original social critiques. Bread and Puppet Theatre plays have incorporated such themes as the horror of the Vietnam war, the Kent State shootings, and other, more mythological topics.

Art and Revolution, as its name implies, explores the idea of art as a radical means of achieving an egalitarian, anarchist society. It grew out of demonstrations against the Democratic Convention in Chicago in 1996 and played an important role at Toronto’s Active Resistance a gathering in 1998, as well as San Francisco’s Reclaim May Day celebrations.

There are now Art and Revolution groups all over North America. Their mandate states, the "Art and Revolution Collective aims to bring people together to create new ways to resist effectively and to build communities capable of making radical change and social revolution." They were heavily ‘involved in the mass protest against the World Trade Organization meeting in Seattle and many of their inventive large puppets were easily seen on national media coverage. Their web site is at www.agitprop.org/artandrevolution.

To sum up, the anarchic strains within puppetry and its attraction for those on the margins, is, on the profoundest level, an act of reclaiming one’s freedom. By manipulating little dolls (or even giant ones) and saying what one wants, puppeteering comes to symbolize the ultimate act of creation, the creation of a new world free from the obscene ravages of authority.

Postscript
This article appeared in the Detroit-based Fifth Estate paper, Spring 2000, seemingly prompted by the use of giant puppets on recent demonstrations in Washington, Toronto and Seattle (and we might add London). As a quick overview of the subject it might simplify some of the history. For instance, Punch and Judy shows expressed some of the contradictory strains of popular culture, not just anti-authoritarian ideas but also, for instance, violence against women. The article also focuses primarily on more or less specialist puppeteers and so neglects more popular practices such as the making and burning of effigies. Still this is a good starting point for a subject about which much more could be said. 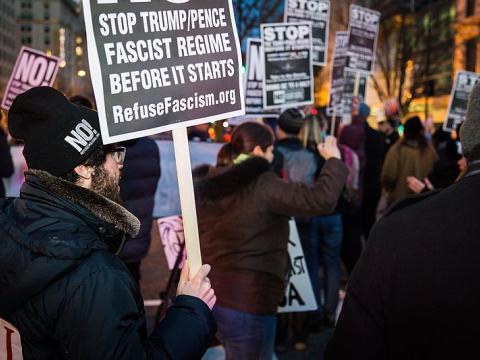 An overview of how the events of the past 25 years have lead us to the situation we now find ourselves in.
Image 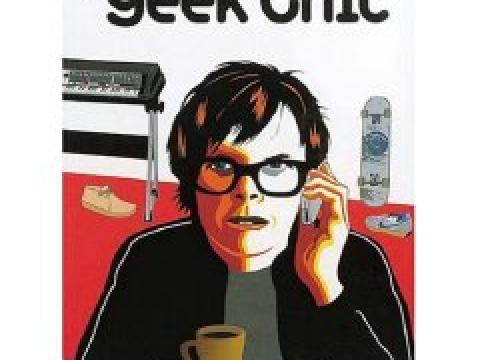 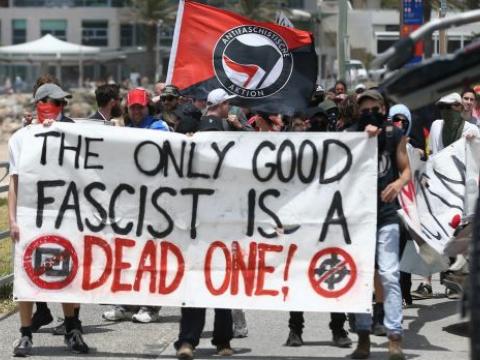 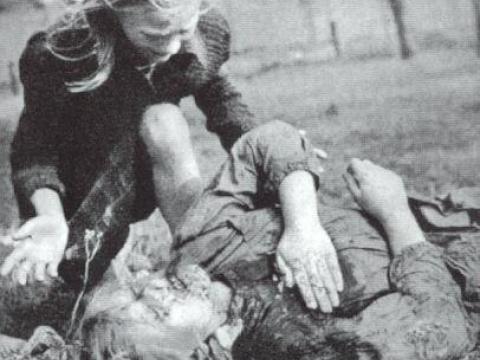