As neo-liberal education reforms are planned across Europe, students in the continent have been taking to the streets leading to battles with riot police in several cities.

On Wednesday morning, the day before the general strike over one million workers, students clashed with riot police in Paris after a demonstration over the university reforms. Universities across France have been barricaded and picketed for almost two months in a standoff over these higher education reforms. The satirical weekly Le Canard Enchaîné yesterday reported that Sarkozy wanted student protests calmed by May, fearing echoes of the student-led protests of May 1968.

Barcelona
Seven people were arrested and 80 injured in clashes in Barcelona between police and university students on Wednesday. The clashes occurred during two city-centre protests in the northeastern Spanish city after police forced students out of a university office they had occupied since November.

Police wielding batons charged the protesters as many students threw rocks, chairs and bottles at the officers. The spokeswoman says 46 of the injured are police officers and several news photographers were also injured. None of the injuries was reported to be serious.

Groups of university students across Spain have been protesting for months against changes proposed under a Europe-wide reform of higher education called the Bologna Process, which is meant to allow students to study abroad more easily and for university degrees to be equally recognized in participating countries.

The intended changes have been received without criticism in most countries, but some Spanish undergraduates complain the moves are likely to benefit wealthier students who can pay for postgraduate specialization.

Italy: The Wave
Demonstrations happened all over the country and in some cases, like at La Sapienza university in Rome, they ended up in intense fighting between the police and the students. The slogan has been “Strike now, freedom of movement”, and the students demonstrated against the recent cuts to the education system and the presence of fascist groups within the universities. The students’ threw shoes and other objects at the police in front of the ministry of the economy, emulating what had happened in France.

The minister Brunetta and Germini commented on what took place in a press conference, calling the students guerrillas. The minister Germini also presented her plan to introduce a limit of 30% of foreign students in schools. She also stated that 18,000 teachers will not find work this year while 10,000 will be precariously employed at universities. Furthermore, university courses will de decreased by 20% alongside the cuts introduced by the Germini reform to the public education system.

Rome
The protests at La Sapienza were only the beginning; the Rome Wave movement have said they will come back stronger than ever. On 28th March students will walk back into the streets to contest the G14 meeting on job and social crisis-management measures and to express their ideas on welfare and the management of the crisis. On 26th they will have another public meeting on the topic of freedom of movement to underline their protest against the attack to the right of calling strike and ask the union to throw away the protocol on demonstration. The whole manifesto of the Wave towards 28th March can be read in English on here

Turin
Once again fights broke out in Turin at Palazzo Nuovo, the main office of the humanities faculties, between dozens of students from Fuan-University Action (Fascist) and the autonomous university Collectives. The fight was prompted by the distribution of leaflets by Fuan outside Palazzo Nuovo for the coming university elections. On 9th March, for the same reason, there were fights with various injured people among policemen and a left-wing student was arrested. Afterwards, the chancellor forbade the distribution of leaflets and the collection of signatures within the university.

Bologna
A thousand people joined the autonomous and independent demonstration called by the local Wave in Bologna. The demonstration saw the participation of the whole world of education from primary schools to the universities, researchers and high- schools included.

Venice
The students from the Venice Wave demonstrated using the slogan “let’s make the strike concrete”. Wearing masks of ministers Germini and Tremonti (Education and Economy), they then walked to the Domus Soccorso where they hung a banner of protest. Domus Soccorso is, in fact, a building that after being redecorated by the Region to make flats for students is now in the hands of a private company which built 28 luxury flats. Afterwards, the students occupied a flat, empty for years and belonging to Ca’Foscari University. Here was their attempt to begin makingmaking the strike concrete.

France has been hit with a wave of strikes, protests, marches and university occupations in recent days as workers, students and young people fight a new legal state assault on employment rights, reports Jef Costello for libcom.org news.
Image 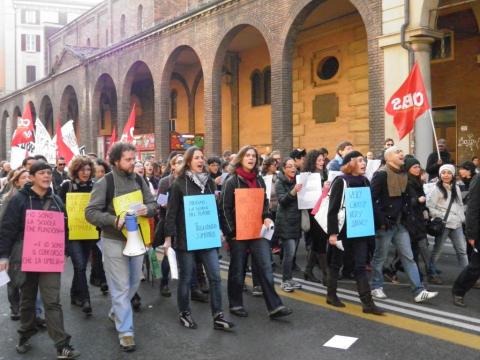 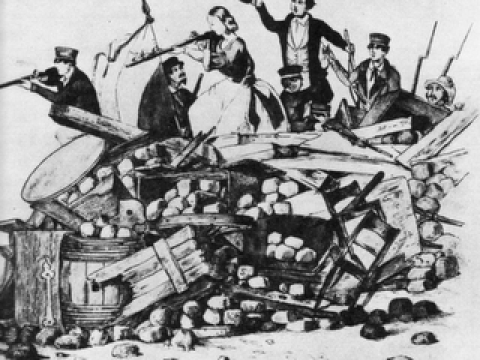