Taksim is not Tahrir—yet - Kadir Ateş

Taksim during a May Day rally two years ago.

Following the seismic upheavals in the Arab world, Kadir Ateş assesses the situation in Turkey.

There is a photograph of a young man standing in the middle of an embattled Cairo with a sign which reads: “Egypt supports Wisconsin workers one world one pain.” In Madrid, where masses of the unemployed youth currently occupy the Puerta del Sol, homages to Tahrir Square can be seen next to banners which announce the Spanish Revolution. Underscoring this collective sentiment was the recognition of the limits to the trade unions and political parties, whose appearance on the scene arrived post festum. This resurgent brand of internationalism is nothing short of inspirational, and has clearly shown that the so-called Arab Spring is a much more global in content than its baptismal name would otherwise suggest. Turkey, a country with historic and religious links with the Arab world has not, however, experienced this same seismic upsurge. This almost unnerving quiet in the wake of such upheavals has (per usual) reinforced the tired narrative of Turkey as the stalwart secular republic, whose democratic tendencies and relative economic stability present itself as a model to which its restless southern neighbors can aspire.

Regardless of the fact that Taksim Square1 did not transform itself into Tahrir Square, there has been a major upswing in labor militancy in the past few years which seems to have no clear end in sight. Reports of yet another strike or demonstration in the past several months have managed to drown out even the more stentorian accolades to Turkey’s successful weathering of the current crisis. This relative success of the Turkish bourgeoisie in maintaining growth was accompanied by a number of legal measures implemented to make labor more “flexible”, suppress the minimum wage, and continue the fire sale of state-owned enterprises. The Tekel strike of 2009-2010 provided the first substantial challenge to the continuous assault against the working class in Turkey, as explained in Issue No. 22 Why the Tekel strike was so remarkable, beyond its militancy—which included hunger strikes, occupations, the formation of a tent commune in the middle of the capital city of Ankara—was the background of the workers themselves. Most closely aligned themselves to the Islamist AK Party (AKP) or the fascist Nationalist Action Party (MHP), and had otherwise been staunch anti-leftists. For the first time, many considered alternative ideas beyond what any of these parties had offered, and the lack of trade unionist support cast doubt over that form of organized labor as well. Yet in the months following the defeat of the Tekel workers, signified in the passing of Article 4/C, new anti-labor laws have been enacted which have in turn provoked the working class to continue its fight.

The willful refusal of the trade unions to support the Tekel workers was a lesson which they feel needs no repeating. Since the strike, they have begun to reassert themselves on the scene, with aggressive calls for strikes and demonstrations. Apart from those Tekel workers who continue to denounce trade union bureaucracy and its meddlesome character in the class struggle, others have answered the call to participate in union-led protests and demonstrations. In the latest of a series of laws pushed through the Turkish Grand National Assembly by the ruling AK Party was the “Bag Law”, which takes aim at the power of trade unions in addition to the working class. The Bag Law, named as such because of the plethora of legal measures, some related to labor, some not, aims at continuing the process of cutting costs and providing narrower job opportunities. Here are some of its more distinctive features:

1. The creation of a flexible labor regime.

2. Providing less waged internship positions for the youth upon entering the labor market.

3. A sizeable reduction in corporate taxes for both foreign and domestic corporations.

Other aspects of the law include a reduction of the minimum wage. There appears to be more to come, as one journalist put it, that most of these laws are just the “tip of the iceberg”;3 what comes next will perhaps be further structural adjustments in order to accommodate the Turkish bourgeoisie’s growing dependence on FDIs.

Reactions against these laws in February were met with blunt force: tear gas, arrests and beatings, similar to how the previous Tekel strike was handled by the state. Students, workers and trade unionists all seemed to have joined in blockading streets in Ankara, as the protests began to spread to other cities such as Istanbul, Diyarbakir and Trabzon. The inclusion of students is important, particularly as a report from the ILO last August reported that youth unemployment is at an all-time high. According to the Turkish Statistics Institute, unemployment for those “15-24 years of age is approximately 25%.”4 Life for the youth in Turkey in general looks precarious at best, as public debt begins to spiral out of control and fears of inflation deepen as job prospects decrease.

The upcoming election on June 12th may nevertheless signal a victory for AKP, though with not quite the margin it had in 2007.5 Mounting protests against the increasingly authoritarian AKP have been met with scores dead and injured. In one such protest on May 31st in the Black Sea city of Hopa, a retired school teacher died in a tear gas attack, causing further outrage against AKP. Having stuck its finger in the air to test the political change of wind, CHP has managed to purge some of its more orthodox Kemalist members for the sake of gaining more votes. One may recall a similar transformation of the CHP in the 1970s under the first government of Bülent Ecevit. Even the unions are beginning to take advantage of the situation and encouraging the rank and file to elect their own personal picks. The real danger which then presents itself to the working class in Turkey no longer seems to come from the call to (political) prayer of AKP or even MHP, but from the social democrats, garden-variety leftists and even the Stalinist Communist Party Turkey.

Much of the talk of “neoliberalism” coming from such leftist organizations is often a call for a return to state-administered enterprises under “workers’ control”, which is nothing more than bureaucratic state capitalism. It should be remembered that even under the most intense periods of nationalization in Turkey, often glorified among the social democrats and the like, was fought against by the working class. To therefore conclude that what is occurring in Turkey can be reduced to a neoliberal agenda only recycles the endeavors of past struggles, at a time and place where neither such a term nor entity existed. The effort for the working class to reject fascist and Islamist politicians is admirable, and should not be downplayed in any sense. Yet failure to consider how in the most trying of times, the trade unions or leftist parties have not always come to the defense of the working class—or come at a time when only they have been threatened—should be a point of departure, rather than an alternative to, the so-called neoliberal right-wing.

Interesting article. It would be helpful for the author to explain what the political parties are, in addition to just their acronyms.

The three parties mentioned in the article are the three main political parties in Turkey.

AKP, an Islamic centre right party, is the Current governing party having won 49.83% of the vote in this years election increasing its vote. It has been in power since 2002.

CHP is the main opposition party and took about 25% of the vote in the last elections. It was established by Atatürk in 1919. It is a member of the Socialist International. It is 'Kemalist' and defines itself by the 'six arrows'; republicanism, nationalism, statism, populism, laïcité, and revolutionism.

MHP is the smallest of the three main parties. It's roots are in Turkish 'ultra-nationalism'. It is probably most infamous in the West for its youth-wing the 'Grey Wolves. In 1981 they were formally charged with 694 murders.

The results of the last elections can be seen on this map: 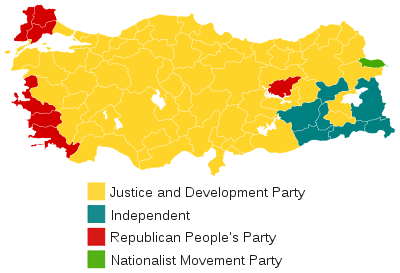 Although it looks all yellow, unlike the UK Turkish electoral have more than one representative. In Ankara for example there are two electoral districts, which elect a total of 31 members of parliament, of which AKP took 17, CHP 10, and MHP 4.

Independents essentially means BDP (Peace and democracy party). To win seats in The Turkish parliament as a party, you need to pass a barrier of 10% of the national vote.

I previously criticized this article on RevLeft. My comments can be found on this thread if anyone is interested. Essentially I think it completely overestimates the level of class struggle in Turkey at the moment. 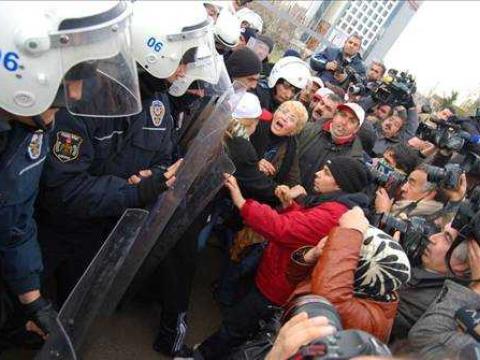 Lessons from the Tekel strikes: class solidarity and ethnic (in)difference

OWS and the working class

How has the Occupy Movement impacted the lives of the "traditional" wage-earning working class and how do they see the Occupy? Brief notes from NYC and NJ.