In East Germany a crowd tens of thousands strong besieged and ultimately stormed and trashed the headquarters of the Stassi secret police, destroying all of the records. In the USA, the former head of our secret police, George Bush, was elected president.

While peace threatens to break out in the rest of the world, the administration casts about anxiously for new enemies in new wars. With the tragic loss of the "Evil Empire", they must look for new bogies closer to home. Glued to their dramatizations and "real life" cop shows, the viewing public waits for the criminals to be pointed out.

So the administration has declared War on Desire. Sex and Drugs are the current targets, given the attractive multiple mandate this War gives to intervene in Latin America, harass minorities, and to monitor the bloodstreams and sex lives of federal workers and citizens. But the targeted drugs and sex are less significant than the battlefield: information.

Pleasure and its pursuit has always been viewed by repressive regimes as inherently radicalizing. If they can define all drug use and sex as "criminal" and dangerous to society, then they can pass off their need to monitor our bloodstreams and thought-patterns as benevolent protection instead of blatant repression.

The eighties saw a dramatic ideological reaction to the radicalism of the sixties and even the lukewarm liberalism of the seventies. It culminated with the implosion of communism which has swept away any lingering impact of the traditional (and increasingly irrelevant) left.

The War on Desire will be complicated by technological advances, but it is hard to say who will benefit most from them. Will advances in birth control techniques, like RU 486, empower women or make it easier to control them? Will the expansion of the information industry benefit the fringe—hackers looting government files—or the Bureaucracy?

In many ways the onset of "personal" computing has undermined the official control of information. Hackers waltz through the files of the governments and the corporations. Computer bulletin boards and modems have created information networks completely outside officialdom. Recent draconian government action against hackers shows how seriously they take the threat.

Social control has always been primarily practiced by propaganda. Who cares what a few thousand personal computeroids think if the millions believe what survey-certified "creditable" anchor-persons tell them is true? But as the mass media drifts off further and further in republican, religious, corporate fairyland, increasing numbers of people will find themselves experiencing information dualism. What we personally experience and learn from our friends and acquaintances simply doesn't jive with the irrelevant but apparently unambiguous truths pandered by the Mass Media.

This period, when Official Reality becomes impossible for most people to believe, is historically an uncomfortable one for repressive regimes. In the "Communist" bloc they have fallen. In China and the USA they are increasingly resorting to crude force and censorship.

The War on Sex justifies the crusade against abortion rights and the refusal to teach sex education to prevent AIDS. The War on Drugs justifies aircraft carriers off the coast of Colombia, "military advisors" (remember them?) in Peru, and quasi-military occupation of communities of color in the USA. And both justify the "need" for the administration to keep lists, limit the rights of others, and keep its own business strictly secret.

Bush's history in "intelligence" was a non-issue in his election campaign, but his presidential behavior has been more than a touch paranoid. He's considered a "secret" president, and is known not to be above lying to maintain secrecy, even for just an extra day. He excels at doublespeak, for example labeling himself "the environmental president.'' On the basis of general style alone it's easy to see Bush as the likely mastermind of the Iran-Contra scam, most of all in the way he avoided the slightest taint of connection with it despite his official role.

While Reagan's "spin doctors'' had their hands full just cleaning up his bloopers—as testified to by his plummeting reputation since he became dependent upon the services of a single commercial publicist—Bush is developing a machine of staggering proportions.

In addition to refusing to let anyone know about what it's doing, the administration is showing insatiable curiosity about the doings of the rest of us. The Wars "require" the federal apparatus to encroach on the elusive "right to privacy" more than at any time since the McCarthy era.

Pregnant teens, if they want an abortion, are increasingly being required to get the permission of their biological parents. A host of legal and medical agencies insist they have the right to test people for AIDS—if necessary against their will, and perhaps to quarantine them as well. The federal government is insisting that all of its workers need to be drug tested and the courts, after ten years of Reaganistic packing, are backing them up.

And the mainstream media slavishly broadcasts the straight party-line, which even the party newspapers in ex-communist Europe aren't doing any more! The result is a view of the world so heavily processed that it bears little meaningful relationship to reality.

San Franciscans had an interesting taste of the fun-house mirror effect of the media in the aftermath of the Big Earthquake last October. The actual earthquake, although it caused billions of dollars in damage (mostly knocking down structures that probably wouldn't make it through the next really big one anyway), was really not very deadly. But the media version, which was what the world outside San Francisco experienced as the 'Quake, was a holocaust of raging fire, collapsing bridges, and "hundreds'' of commuters crushed to death in the cars.

Initially, many San Franciscans believed this version, which they heard on transistor radios or by long-distance phone calls from horrified relatives watching dramatic footage on the evening news. For several days most people believed that "hundreds" had died, as the embarrassed media hesitated to reveal how badly they'd exaggerated the death toll in their lust for blood and ratings. Most people who experienced the actual earthquake now consider the national media's coverage of it a sham, but it remains the official version, enshrined in glossy magazine photos. The truth is so easily distorted just to produce flashy copy that it is frightening to contemplate what deliberate propaganda is producing right now.

Processing is power. The revolution that tumbled the Marcos regime in the Philippines began when the 20 keypunchers of the national election results refused to fudge the counts. The ability of a regime to impose its version of reality is the cause, and the measure of its power.

China's government insists that there was no massacre in Tianamen Square. The fact that it can even say this testifies to its continued grasp on power—just as the open disbelief of this lie by the entire world, including most of the people of China, testifies to the weakness of that grasp.

In the USA—after China the last bastion of conservatism in the world—the war is heating up. Will the powers that be maintain their monopoly of processing, and keep the complacent masses quiet? Or will the facade rip as the gap between the blissfully ignorant haves and the increasingly miserable have-nots grows? The Bush administration is counting on a preemptive strike at Desire, at sex and drugs, those venerable corrosives to Authority.

But the dictators of China may yet be felled by the Fax. Here they can censor Robert Mapplethorpe's sadomasochistic images in Cincinnati, or the raunchy lyrics of 2 Live Crew in Florida and Texas, but the net result is predictably to promote rather than suppress the disturbing contents.

In this issue PW flees the work-a-day world for greener pastures; we've gone on vacation! For some of us this has been literally true—masquerading as the Anti-Economy League several of our crew invaded Central & Eastern Europe—while for others the vacation has been a theoretical concept. We have accordingly dug into our singular & collective pasts to cast light on "anti- work."

Med-O reflects on a journey through Africa in "The Land of F," while William Brummer focuses on South Africa and its turbulent course in "Violence Processing." Chris Carlsson revisits Brazil (see also his letter in issue #24) to explore other dimensions of the tourist and the toured. Zoe Noe's letters from Central Europe and a Polish woman's reflections on life in the U.S. help round our view of mobility and culture.

Primitivo Morales takes a more abstract view of leisure time in his essay "Just Two Precious Weeks?!!" and two related pieces on tourism and mass entertainment. The two book reviews cover old—but not dated—books that explore the possibilities of having more leisure time. Frog reviews a French publication from the '70s, To Work Two Hours A Day, which contains a trenchant analysis on work and the possibilities for its reduction. In his review of The Right to be Lazy, Primitivo shows that such ideas are certainly not unique to this century.

And lest you think we're all theory, we welcome the Billboard Liberation Front back. If you're looking for a few hints about what to do this summer (or winter) you might consider their "Manual" for billboard alteration. One of our friends, Art Tinnitus, has provided an accompanying essay on the prankster in modern society, and two unidentified conspirators tell their tales of urban propaganda.

Christopher Barnes' "This is My Life, Jonathan David" extends the exploration to the factory, while Adam Quest examines what would happen "If the Weather Channel Went Off the Air." The excellent poetry section includes John Soldo, Jim DeWitt, Janice King, Adam Cornford, Christopher Hershey and Richard Wilmarth. Josiah Liet takes us on a whirlwind tour of an exclusive club.

Our sense of (gallows) humor is untarnished, as Chaz Bufe's killer story, "The Hot One," vividly shows. Don Webb's "Occult Revival" reports on the rise of The Damnation Army in the Bowery. Peter Bates' "Micro Fictions" shed a stroboscopic light on modern life. We round out the issue with an excerpt from John Shirley's excellent "cyber-punk" trilogy "A Song Called Youth."

We apologize for not including the results of the art survey (see issue #24), but we got carried away with other material, and we had a number of interesting pieces arrive at the last moment (Here And Now from Scotland; the Institute for the Study of Neo-ism in Koln Germany, etc.). We realize that our credibility is just a little tattered, but we beg forgiveness.

We'll be back before year's end ($ allowing) with another issue. It will be back to work as we focus on non-profits, "hip capitalism" and other progressive aberrations. We had to leave a lot of good material on the shelf—we've got a running start on both material and money. Won't you join us? We urgently solicit your writing, your art, your participation in our collective process(ed world). 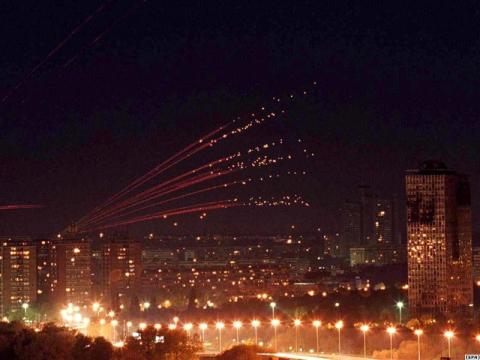 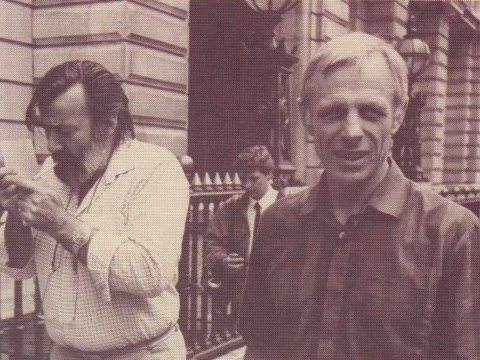 Reviews of books by Geroge Blake and the two libertarian activists who helped him to escape from prison in 1966.

State of the Unions: Recent US Labour Struggles in Perspective