Over 12,000 teachers demonstrated today in Warsaw. Among their demands were not only calls for a pay rise and retention of early retirement priveleges, but also for he dismissal of the Minister and Vice-Minister of Education.

Today over 12,000 teachers from around Poland came to Warsaw to protest the policies of the government, both in regard to its financial committment towards education workers and to the outrageous actions of the Minister and Vice-minister of Education.

The teachers are demanding an immediate pay raise of 7%. When the current Minister of Education was instated, teachers were promised this raise and talk of the raise even occurred during the elections. Although teachers were given a smaller raise, it fell short of the promised 7%. Currently it is not uncommon for a teacher with 20 years’ experience to earn about 300 euros per month.

By comparison, police were given a much higher raise as an incentive. Many teachers are aware that while the state is reluctant to spend money for their salaries, it continues to launch expensive military programs and even orders the process of checking 700,000 citizens for cooperation with the communist regime. Most education workers, as well as most citizens, feel that the government’s spending priorities are totally screwed up.

Even more than the wage issue, the teachers were protesting against the politics of the Minister and Vice-Minister of Education. The Ministry of Education is currently under the control of far-right politicians from the League of Polish Families. They are trying to implement dozens of horrible programs and to get rid of or harass any teachers or educational workers who have left-wing sympathies. This has led to hirings and denial of professional recognition for some teachers; most recently the League has also motioned to confiscate the property of the union ZNP because it operated before 1989 and some of its members and leadership have left or liberal sympathies.

Most recently, besides the introduction of obligatory school uniforms, the Ministry has been launching a crusade against gays. The League introduced a bill which would make it a criminal offence punishable by jail time to “promote homosexuality” in schools. What does that mean? The head of Teacher Training in Poland was fired last year for using a handbook written by the Council of Europe which contained one chapter on “tolerance”; he was accused of using a book which promoted homosexuality. The Vice-Minister also claimed that gay teachers would be fired. He later claimed that it wasn’t what he meant. You could be a gay teacher, but you can’t “promote” homosexuality. Presumably that means you could be a gay teacher – as long as nobody found out about it.

For this reason, the Campaign Against Homophobia and some other gay activists joined the teachers strike. So did some anarchists from FA Praga, Elba Squat and Food Not Bombs. Oddly enough, the leftist sects which usually appear at such events were not to be seen, except one or two persons. Students, including anarchist the students were oddly completely missing. So were otherlabour activists. There were some other people who came from the general public – mostly private individuals. This lack of support was rather odd and unfortunate; the great majority of people support the demands of the teachers.

External links
:> Pictures of today's demonstration can be found here (Click on pics to make larger)
:> Another related article

Teachers went on strike at a school for children of NATO officers in Bydgoszcz, Poland.

Halemba mine tragedy: the high costs of greed and outsourcing

No worker should not have gone into the mine that day. But Halemba sent in some unqualified contractors. Laure Akai reports. 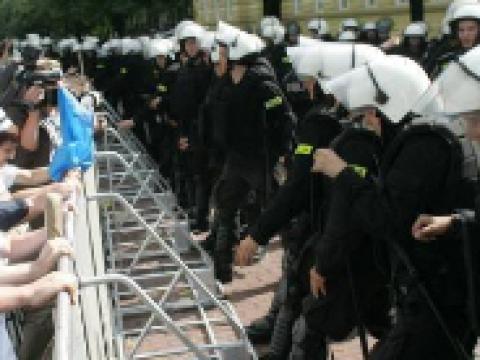