A quick response to an item I just saw in the 2019 annual letter from Bill and Melinda Gates.

In the latest annual letter from Bill and Melinda Gates, Bill wrote that he was surprised to find "textbooks are becoming obsolete," which is odd considering his outsized role in making this a reality over the last decade.

It is true that textbook companies can be terrible. Many of them have their hands in pushing the business model of education. This model includes speeding up students to get a degree, which means they have less time to engage with each class, each reading list, and their critical thinking and writing. They are sped up to ensure they will attain a degree, and in turn, show the "value" of their education (in the eyes of bosses). Implementing corporate "education reform" is largely designed to undermine teachers and crush unions, to privatize education and make it another resource for capitalist profits, etc. This includes cutting teachers and keeping wages/salaries as low as possible. The top-down solution of eliminating "stand alone" textbooks is just more business-model crap designed to further attack the position of educators under the guise of helping students.

The first obvious, and highly visible problem is that having students on their laptops and hand held devices as their book in class creates the tendency to surf the net and text on social media during class and lectures. The format is a major distraction and destructive to concentrating, engagement, and learning.

Putting students online 24/7 forms addictive behaviors that encourage short attention spans. The idea that reading always has to involve the packages of bells and whistles that come with corporate e-reading formats is destructive. Much of what comes with newer mixed media textbooks is intrusive garbage that gets in the way of teacher and student taking control over their own reading or using a book outside narrow guided experiences. For example, many new e-textbooks have the student read notecard length passages, followed by quizzes to check for understanding. If the teacher wanted to assign a specific passage or page, it could require navigating the pop up or sequenced "tasks" built in to the electronic version of the book. Those sequences are often impossible to get around or turn off. It also pre-selects what is important. It should be obvious that the pre-determined focus can conflict with what the instructor wants to highlight.

Using many of these e-book platforms is not the same as reading a book. It is using a computer program. It's actually eroding book reading skills and enforcing screen time and programmed formats.

The example Gates gives in the screenshot, of having embedded videos to explain is fine, and no one wants to keep students from accessing such resources. Before simply relying on software though, schools should have smaller classes, more access to tutors, and more real people on hand to teach and spend one on one time with students when they need it. That's the opposite of what the current push to get more and more teaching done online is. We currently see this in the demand for smaller classes from striking teachers. Making those demands requires fighting against the Gates foundation backed pushes to privatize and charterize schools.

Even when the e-book options are touted as a progressive cause, they can easily be coopted into the business model of education. Currently, to attract more students as college enrollment declines, states and college administrators are forcing departments to use online OER (Open Educational Resources) many of which are awful and incomplete. For example, my department was urged to use a history OER textbook that only covered the first part of a two semester sequence. This would have required switching to a corporate textbook for the second semester, destroying any continuity, covering items already in the first class, and leaving off others. It would be a disaster. The claim is that this is for the students, who save money. If the students are the concern, why not get them the best textbooks, make tuition and books free, and give them a stipend to attend school, which is work? That's how it's been done in many countries with great success.

The real reason the OER is pushed is to attract more students as "consumers" which is again the business model. That's due to the fact that states underfund education. It's not a priority. Professors already supplement textbooks with their own resources and knowledge in their classes, as well as with the experiences of their students who shape learning. With the OER platform, professors at my college were asked to write material for whatever was missing and add it to the textbook as needed. There was no mention of pay, or retaining ownership over their work (sadly necessary in the wage labor relationship teachers find ourselves in, in this case). Even in a perfect scenario with a great OER text, and fully compensated labor, why spend time writing an entire textbook? Students probably still prefer a good physical textbook.

Meanwhile, that same business model is applied across the board, including keeping professor wages down, meaning having 75% of your teacher force as year-to-year hires with no job security and little or no union protection. Even when adjunct professors are represented by unions, we are constantly told we'll be the first to go if there are cuts, and it is our union who will facilitate that, with a Trumpian "buh-bye" as they kick our asses out the door. Schools have been laying off entire departments to cut costs, but even the "best" union (as I'm constantly reminded mine is) won't demand job security, the right to smaller classes in the face of lower enrollment (it's not cost efficient) or the guarantee to ongoing healthcare coverage if we dip below teaching three classes per semester.

The students themselves are sped up and told to get through school faster and are guided into paths based not on their interests, but on what employers want from them, and that can change in the course of a year, rendering even these "pragmatic" educations obsolete to employers. Automated systems that colleges now use to provide "guided pathways" to "success" actually dissuade students from taking "unnecessary" arts and humanities, music, and art classes. Not pragmatic enough. Bosses won't care that you can sculpt, play guitar, appreciate literature, or think critically about capitalism. (Even if they did care, they're still bosses and their system is at the root of these problems.) 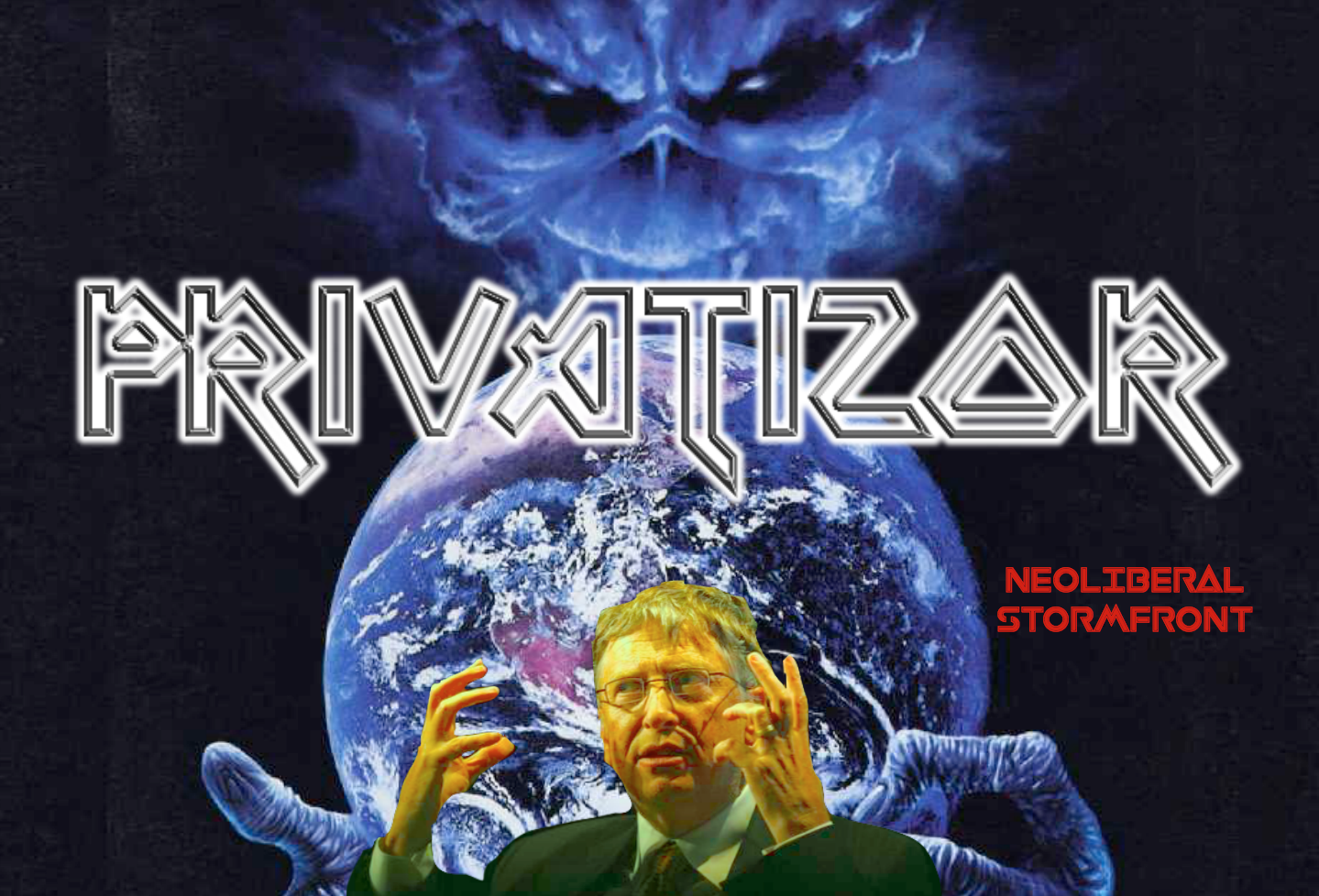 The idea that you have to "entice" students, or entertain them is the idea that they are consumers and professors or high school teachers are clerks. Students are further encouraged to give "yelp" style "reviews" of professors on sites like "rate my professor" or in their end of the semester evaluations. This prepares students to be the next wave of hyper exploitable workers who will face the same model you are forcing on teachers. This is not to belittle the work of service workers, including clerks. If anything, it points out the need for cross-sector solidarity between all working class people, including unemployed and underemployed.

It's all connected, and Bill Gates is a notorious voice for privatization and union busting, establishing himself over the years as a know nothing billionaire "education reformer" whose power outstrips any alleged merit he has to offer by a billion to one.

Textbook publishers in the US already publish 'new' editions every year to oblige students to buy them at ridiculous prices and discourage them from buying second-hand books.

Electronic textbooks are pretty bad from the sound of it, and have even less input from educators than traditional textbooks. Unfortunately few people with power or money have any knowledge of education (assuing that they actually wanted to improve the education system.)

Yeah, good point. I encourage my students to get the new one and sell it back at the end, or to get an older copy cheap online, their choice. They can get an electronic version if they want. The one I use has an option for both if the student needs the bells and whistles version. Ultimately the books and the education have to be free, and students paid for the work of going to school. Beyond that we need a communist society where it's to each according to their need and from each according to their ability.

Also, a lot of textbooks are created by conservative committees, which is a separate problem for many high school texts especially. They get upset when textbooks leave off too much about American heroes and the founding fathers and include too much about Native Americans, women, workers, etc.

For me, I'd rather have a good basic textbook and add all the materials/lessons from a radical perspective myself. These days even basic textbooks can include decent critical material, but it's a mixed bag.

Excellent article. Thanks for this discussion of Bill Gates' pernicious effect on education.