Former Conservative Prime Minister Margaret Thatcher has died. The occasion has been the cause of both mourning and jubilation. What follows is a reflection on what this means in the context of the ongoing class struggle.

Today, along with up to 55,000 other workers in HM Revenue & Customs, I was taking part in a half day's strike. It was just before one when literally hundreds of us were gathered outside work for a mass walk-in, and a member of the public ran past excitedly. “Maggie Thatcher's dead!” He yelled.

Straight away, union reps and members, the drivers lined up in the taxi rank and other members of the public were on their phones to check the news. Some cheers went up. More people shouted the news out to their mates on the street. More cheers. Then the strike finished, and her name kept popping out of the conversations of the throng walking into work. In the office and both my manager and her manager are talking about it, and how it was good she hadn't held on a week longer to sully the memory Hillsborough.

Waiting for the bus home, I rang my nan and told her the news. She remarked that no tears would be shed for Maggie in Liverpool and reeled off a list of why she despised the woman.

All of the above happened spontaneously. Only a tiny minority of the people involved are known militants or communists, the kind of people you would recognise as the professional left in attendance at every vaguely left wing rally or demonstration. Rather they're mostly working class people – male and female, employed and unemployed – of an age to remember what Thatcher did to our city and our class.

Her role in the Hillsborough cover up. Wapping. The miner's strike. Destroying industries and throwing millions into unemployment. Driving whole towns across the north of the UK into poverty. The Poll Tax. The Falklands War. Supporting Pinochet. I have no need to go into great detail about the devastation she wrought or pick a worst amongst her acts, because everyone can do that for themselves.

Margaret Thatcher didn't do what she did alone. Her party, the political class, the police, the generals and the bosses all had their parts to play. But she didn't lend her name to what would become the prevailing ideology of the next three decades for naught, and there's a good reason that the most venom is reserved for her.

It's worth pointing out that her death isn't a victory in any sense. She shattered the workers' movement and used the law to enforce the unions' role in policing the workforce rather than advancing its collective interests. She set us on a path of privatisation and casualisation that has continued unabated up to the present and only escalated under the banner of austerity. Her class is on the offensive and our movement is set into the managed decline she was once advised to inflict upon Liverpool.

Perhaps that's why there's so much jubilation over her death. Perhaps we're not that dissimilar from the desperate and wretched who took comfort in the death of Ebenezer Scrooge because he'd condemned them.

We have so little to celebrate right now, they're taking so many jobs and desperately needed money, so am I going to have a big glass of wine for this? Yes, 'cause there's fuck all else to drink to.

There is one important difference between Scrooge's victims and Thatcher's victims, beyond scale. Today people will drink and celebrate because she's gone. But tomorrow, we will organise and fight back, as we did yesterday. Our movement is battered and broken, but it's still there.

Tenants and benefit claimants are angry, defiant and ready to take on the Bedroom Tax. Those on welfare continue to picket and hound employers out of using workfare, so that the scheme remains tottering on the brink of collapse. Militant workers in the civil service have pushed the PCS union into a sustained campaign of disruptive action that they are determined to keep going. Casualised and low paid workers are organising and winning victories.

We're not on the verge of revolution. Talk of a general strike by the unions is just words in the wind which will at best lead to a single day of stage managed radicalism. But the working class hasn't forgotten how to fight.

Thatcher is dead. We won't mourn and we will organise. Given the circumstances, it's probably the best we could hope for.

We have so little to celebrate right now, they're taking so many jobs and desperately needed money, so am I going to have a big glass of wine for this? Yes, 'cause there's fuck all else to drink to. 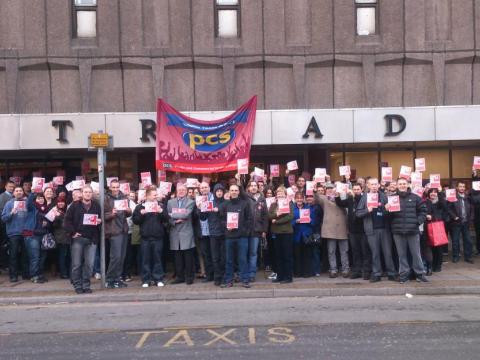 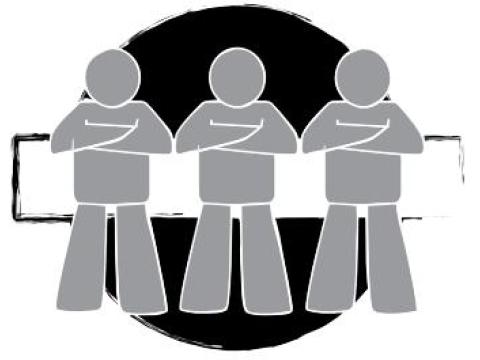 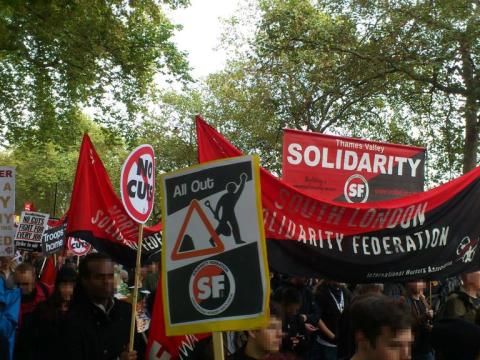