This communique arrived in our e-mail account today in English. We don't have confirmation that this comes from the actual occupiers of the Sorbonne at this time.

We are publishing anyway in order that it be made available to as many people as possible.

We checked this with one of our contacts in Paris, one of the first to occupy the Sorbonne, who disputes the provenance of the communique. She told us:

Ok, for this email, well, if it was genuine, i should have heard about it and discussed about it too + voted it, as i am sort of part of this so called commitee, which hasn’t officialy been called in that way. But this commitee is kind of dead since we got evicted from the Sorbonne walls. Let’s say the people who take part in this commitee have joined different universities in Paris instead of losing their strength waiting for the Sorbonne to reopen its gates. Does this makes sense?
So, I guess some people have decided to recuperate our status (if it is a status) and use it to vehiculate their own messages. I definitely find this message too “dramatic”, just like if there were violins playing behind it… haha. and, perhaps, a bit extreme on some points, especially about the lines on pacifism. Though, it is true that these days, you can feel that the tension is getting worse and that people want to break anything with no good reasons. But I will give you one reason why i am quite sceptical; i don’t think anyone from the Sorbonne would write something like that knowing that they have a great impact on all of the other french universities and students. During the debates we had, we strongly turned down violence.

The communique itself, which we will leave up out of interest, follows:

An Update by the Sorbonne Occupation Committee in Exile

The Sorbonne University with its airs of eternity. Full of suspended history. Marble hallways like a frozen swamp. "When there is no sun, learn to ripen under the ice." Then ten days ago, the ice started melting, one evening in centuries. A fire of tables and final papers: a flame higher than any man, in the middle of the quad, the quad of ceremonies. No more murmurs in the lecture halls, and in the hallways, no more discourses, just jostling together, searching for a structure. It begins. Projectiles, screams, fire extinguishers, chairs, ladders, against the cops. A monster awakens.

The authorities are stupid. They run around. They think that by evicting us they have destroyed the blast that emerged here. Fools. Fools as dull and the heavy thud of a computer on the helmet of a riot cop. By sending us in exile they only broadened our field of action. They will get their just desserts for taking from us our Sorbonne, for having dispossessed us. By installing their police here, they offered the Sorbonne to all the dispossessed. At this hour when we are writing this the Sorbonne does not belong to the students anymore, it belongs to all those who, by the word or the cocktail, mean to defend it.

Since our exile, we've had some thoughts on the state of the movement.

Revision #1: We are fighting against a law passed with a majority vote by a legitimate parliament. Our simple existence proves that the democratic principle of majority vote is questionable, it proves that the myth of the sovereignty of the general assembly can be usurped. It is part of our struggle to limit, as much as possible, the tyranny of the majority vote. All that space given to the general assemblies paralyses us and only serves to confer legitimacy on paper to a bunch of wannabe bureaucrats. The assemblies are neutralizing all initiative by establishing a theatrical separation between the word and the act. Once the vote has been cast for a strike until the withdrawal of the law for equal opportunity, the general assemblies should become a space of endless debate, a space for sharing experiences, ideas, and desires, a place where we constitute our strength, not a scene of petty power struggles and intrigues for swaying the decision.

Revision #2: The union bureaucracies, even though they continue with their habitual manipulations, are not as serious an obstacle to the real movement as the reflexes of pacifism that spread amongst us. The night of the eviction of the Sorbonne, part of the students had no idea why they were there or what they could do, let alone what they should do. They were wandering in anguish of the freedom offered but impossible to grasp, because it was not desired. A week later, after numerous occupations and confrontations with the police, their asserted impotence is finally giving place to an innocent taste for direct action. Pacifism finally becomes what it has never stopped being: a benign existential pathology.

Revision #4: The constant movement, the circulation of everything is a paradoxical condition for the functioning of the capitalist machine. In the same paradox, interrupting its functioning is a condition for its disruption. By the blockades, we are fighting against the total freeze of the situation they want to impose.

Revision #5: We are referring to 68, it is true, but we a referring not to what actually happened in 68, to the folklore, the occupied Sorbonne back then, the barricades in the Latin Quarter, we are referring to what did not happen in 68, the revolutionary turmoil that did not take place. By casting us in the past, some would like to extract us from the present situation and to make lose the strategic understanding of it. By treating 68 as a simple student movement, they would like to dismiss the still present menace of what 68 could have been, a savage general strike, a burst of a human strike.

Revision #6: The idea of democratically debating every day those who are against the strike on the renewal of the strike is absurd. The strike has never been a democratic practice, but a political accomplished fact, an immediate expropriation, a relationship of power. No one has ever voted the establishment of capitalism. Those who oppose the strike are de facto standing on the other side of the barricade, and the only exchange we could have with them is of insults, punches and rotten eggs. In the face of referendums set up to break the strike, the only thing to do is to abolish them by all means necessary.

Revision #7: A strange idea haunts this movement, the idea of occupying university buildings only during work hours. This is an occupation that does not liberate space. An occupation where firefighters, administrators, and pretexts of authority and safety continue to make us childish, and where the university will remain simply a university. It's true that once we've taken over this space, we would need to populate it, populate it with things other than the desire to return to normal. We have to embrace with serenity the fact that there will be no return to normal, and then inhabit this irreversibility.

Revision #8: National coordination reflects the sterility of a certain classic notion of politics. The unionists, the million leftist groups and groupings offer to lifeless general assemblies platforms written in advance by their leadership. In atmosphere approaching that of yet another party congress, the national coordination displays nothing but a soviet-style power play between the "orgs". We propose instead the idea of a parallel coordination following the example of the high-school students' movement of last year, an open coordination (consulta) that is nothing but a temporary space to refine a national strategy.

Revision #9: We are the heirs of the failure of all the "social movements" and not just those of the last three years (teachers, retirees, seasonal workers, high-school students), but many more dating back to at least 1986. We have learned some lessons from these failures. The first is about the media. By becoming the echo of the movement, the media effectively becomes a part of it, a part which, when it pulls out (usually at the same time as the union bureaucracies) provokes the movement's collapse. The strength of a movement is in its effective power, not in what is being said about it, and the malicious gossip about it. The movement must protect itself by all means, even by force if necessary, from the grasp of the media. It must develop its own voice.

Revision #10: None of the "social movements" of recent years has achieved in months of "struggle" what the insurgents of November discretely obtained in three weeks of riots – cuts to public assistance in the affected areas were suspended, funding for local programs was reinstated. All of this without making any demands. Demanding means defining your existence in the mutilating terms of those in power, it means conceding an advantage to the enemy. Even from the point of view of those who want to gain certain things it is stupid.

Revision #11: This is the end of the marches and the days of action declared by central committee. Only wild demonstrations and occupations from now on. The assembly of strikers in Rennes already prefers demonstrations with "intuitive routes", and refuses to submit to the routes ordained by the police and its henchmen. Even their marshals have a new role, and a new name: they are now the "action division" and are preparing to confront the police if they have to.

Revision #12: No one has the right to tell us that what we are doing is "illegitimate". We don't have to see ourselves as spectators of the struggle, even less should we see ourselves from the point of view of the enemy. Legitimacy belongs to those who believe in their actions, to those who know what they are doing, and why they are doing it. This idea of legitimacy is obviously opposed to that of the State, majority, and representation. It does not submit to the same rationales, it imposes its own rationales. If the politicizing consists in a struggle of different legitimacies, of different ideas of happiness, our task from now on is to give means to this struggle with no other limit but what appears to us to be just and joyful. 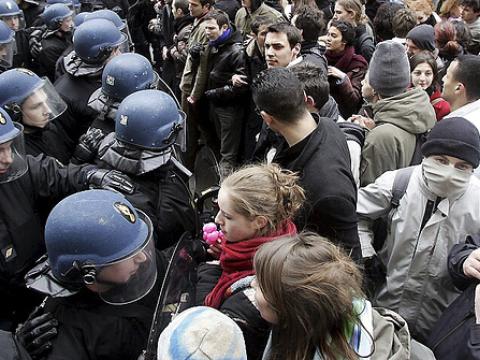 A selection of video clips posted to Indymedia Germany.

Sorbonne occupier speaks to the Unrest in France blog

Here we are pleased to publish a first hand account of one of the first wave of students who occupied Sorbonne University.