Statement from USI-AIT declaring its participation in the co-ordinated general strike of Italian base unions on June 22nd, and laying out both its political and social demands.

The USI-AIT, together with its unions in the sectors - USI-Health, USI-Post Office, USI-LEL, USI- Social Cooperatives and USI-IUR - declares a general strike in the public and private sector for the entire day of 22 June 2012, with the exception of the Emilia Romagna region1 for the . Given the continuing economic crisis, we demand that the government guarantees all income and services to continue living in dignity, recover resources lost by tax evasion and taxing higher incomes and eliminating wasteful spending such as on the military, spreading the available work, expanding social safety nets to all workers on an ongoing basis.

Video from Corriere della Sera (mainstream newspaper) of the strike at Ospedale San Raffaele, one of main hospitals in Milan.. full of red and black USI flags (I think USI is one of/the biggest union at that particular hospital) and there's an interview with a member for those that understand Italian..
http://video.corriere.it/san-raffaele-protesta-protesta/38737632-bc8e-11e1-9b58-5a664080906b

Will try and post up a report from the rest of the day asap..

So, as much of a report as I can give on yesterday's base union general strike (I can only say what I saw in Milan, I know there were demos in Rome and Florence but don't know much about them):

Public transport was quite seriously affected; Italy has a law which means that a minimum service has to be provided during rush hour but apart from that I only saw a few buses going around during the strike. It was probably about as solid as when the major unions strike.

I had the majority of my work cancelled that day coz it would've been impossible for me to reach my destinations. I decided to sweat my balls off going to the demonstration in town. It was small, maybe 1,000 people, mostly from the striking unions. There were also some people from one of Milan's social centres and as we passed all the major banks in the city centre they started lobbing rotten vegetables at them.

There was also another demonstration of over 500 hospital workers marching from the central HQ of San Raffaele hospital to another of the hospital's HQs, blocking a main road as they went. Also, the route of this march goes through a big working class/immigrant area of Milan. Here are some photos of the demonstration (where you can see the massive USI-AIT presence :) )..

Inspiring though any action of this kind is in many ways, given the otherwise limited response to government imposed austerity, the USI-AIT statement reads just like any other traditional union set of (in this context,knowingly non-achievable) reformist demands made of governments and seems far removed from the otherwise stated anarchosyndicalist meaning of 'direct action'.

Yeah, I'd say I agree about the 'wish-list' approach to demands, and there are a lot here that I think don't need to be on there (for exactly the reasons you give) and others seem to be harking back to the 1960-70s. To be honest, I was just looking for something to stick up in the run-up to the general strike as Italy is a fairly massive piece in the Jenga pile that is Europe.. :)

That said, I'd say some of the demands have to be taken in the context of quite large, vibrant social movements i.e. the one about large-scale investments needs to be seen in context of stuff like the NoTav movement; the thing about migrants in terms of various migrant struggles/groups (some base unions, like CUB and COBAS, have been doing a lot of work with migrant workers and there were significant sections of migrant workers on the demo yesterday).. I would say that these 'demands' are more like declarations of solidarity with those struggles..

However, I also think that the statement itself is the least important part of the whole thing. I mean, ultimately, Friday saw a general strike take place which was about as effective as anything the major unions ever try but done completely without them (and in Milan's hospitals, organised largely by anarchists). I think that's significant and its unfair to cite the "otherwise limited response to austerity" as a reason to dismiss the demands as 'reformist'.

I mean, it certainly is reformist to demand that Article 18 is kept, and in the absence of struggle that goes beyond what happened on Friday probably unachievable, but does that mean that it shouldn't be demanded? Does it mean that USI and other base unions should wait for such a movement before calling a strike over it?

My feeling is that Friday's strike was a positive start all in all, and helped build a movement that makes at least some of these demands more achievable.. a lot of questions remain (how to involve those in the mainstream unions, those not in unions at all etc etc). But the base unions showed workers - in and out of unions - that they are able to cause as much disruption as the mainstream unions.. hopefully that'll give more confidence to those who thought that without them, there'd be nothing..

Thanks for the reports, fascinating stuff. I had wondered how much disruptive capacity base type unions had in Italy.

Do you know what the situation is legally in Italy with striking? I.e. if one base union member went on strike in a small workplace like a cafe could they be fired legally? Is the status of USI the same as the other base unions?

And with this particular strike would you know if it had much impact outside of the big cities, or in the South?

Photo gallery from the San Raffaele hospital demonstration mentioned above, with loads of anarcho-syndicalists all over the fucking place.. two months after the fact but better late than never, innit? ;)

A list of (about) all the demonstrations which took place in Italy for #14N - the 14 November set of strikes and general strikes across Europe. 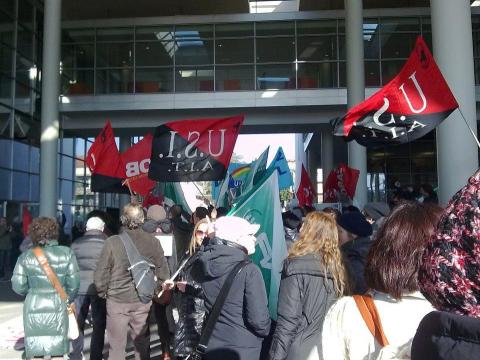 On 12 December 2012, the workers at Careggi hospital in Florence went on strike against the proposal by the company, made unilaterally and signed… 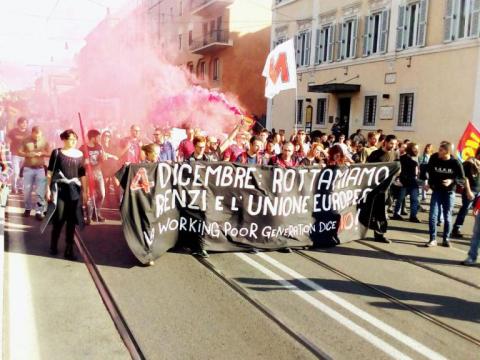 On 21 October, over 1.3 million workers took part in a general strike called by a number of base trade unions (USB, S.I. Cobas, Unicobas, Adl…