Westminster University occupied in the fight against cuts

Over 200 staff and students at the University of Westminster have protested, stormed the board of governors meeting and are currently in occupation, vice-chancellors office, in regard to recently proposed tutoring and administrative job cuts.

Management are planning to slash 285 jobs by April and this follows the closures of the ceramics department and the nursery. Recently, over 150 staff and students placed a unanimous vote of no confidence in the vice-chancellor and his management at a rally addressing Westminster's severe proposed job cuts, on February, 17.

The vice-chancellor has openly declared that job cuts are the initiative of the governors, not his. Well, demonstrators asked him for themselves, after storming past security and into the governor’s meeting. They were greeted by a board of governors who were ‘quaking in their boots;’ shortly after students persuaded Geoffrey Petts, the VC, to stick around and answer some questions which he hesitated to on the first instance but then proceed to do with a full bureaucratic and dismissive tone.

Our demands to the vice-chancellor are:

A) Issue a statement on the avoidance of redundancies

C) Produce alternative, sustainable plans for addressing the financial gap over the next several years.

Join us, over 40 students are currently occupying at Regents Campus, V-C's office!

This is brilliant news, it's difficult keeping up with everything that's going on in universities down south...

The situation at Westminster has suddenly turned a radical corner with the militant support of students stopping the Board of Governors meeting and occupying the VCs space at Regent Street north for 3 days and 2 nights. The response of the VC was to hire a private army of security heavies in yellow jackets... I wonder how much that cost?!
The other optimistic factor is the two unions, UNISON and UCU, at the workplace have come together which means that a strike will really shut the whole university down this time.
Suddenly it feels winable...
The support of the students was always gong to be crucial.

Sussex are currently occupying their VC's office as well: http://defendsussex.wordpress.com/

sussex occupation ended 'voluntarily' soon after scuffles outside (cops roughed up a few randoms (vid 1 | vid 2), including an SP member who was defending the police as 'workers in uniform' when they earlier drew pepper spray with a typical lack of provocation). i say 'voluntarily' because the SWP, who had argued against the occupation and had no part in planning it (no mean feat, Sussex House is a fortress of concentric secure doors that even staff have trouble accessing - a result of previous occupations), then once inside did all they could to get people to leave and claim a victory. once outside, they promptly gave interviews to the press, presumably taking the credit.

in related news, UCU members voted 76% in favour of strike action on an 80% turnout, which ultimately is bigger news than a politicised minority of students occupying and the cops being cops.

I thought since they had the higher ground they could have done a better job of pushing those 'workers in uniform'. :p

1. UCU seems ambivalent about planning joint action with UNISON (blaming UNISON balloting procedures being too slow). But unions always like to keep control of a situation... Workplace solidarity is what really works!

2. The Court of Governors is constantly being talked about as pressuring the management to hurried cuts without any coherent financial plan or clearly thought out justification. But who are the governors in the 'Court' who is doing this? What is their connection to the state or city? How do we effectively lobby these people? Nobody seems to be thinking about this.

The university management seems to be acting under some ideological spell to 'CUT!CUT!CUT!'. One rep described their actions as being more like a sacrificial ritual of blood-letting than an accounting procedure. A ritual of intimidation to keep the workers docile and malleable, with little real economic justification or need. 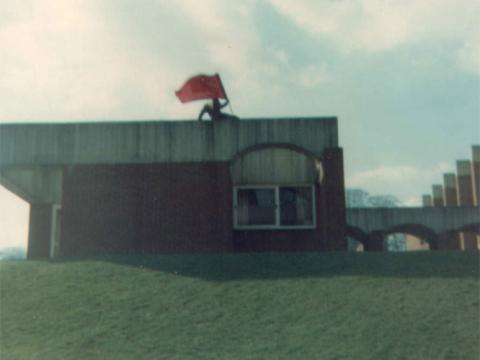