What happened in June 2013 in Brazil? - From the incipient material community to its reactionary destruction in the ideological pseudo-community

After five years, we revisited this historic event that marked a shift in Brazilian history (unfortunately, a shift for the worse).

Five years later, how do we understand what happened in June 2013 in Brazil?

In this society of atomized individuals, public transport is, materialistically speaking, the only common place where workers in a city meet immediately under the same conditions. When bus fare increases, everyone suffers equally. This was the material basis for the union in the protests against the increase of fares that happened in June of 2013.

An interesting question is that, every year, the increase causes a feeling of anger. So why do not protests of that magnitude always happen every year? Certainly, that year, there were multiple simultaneous determinations that resulted in those protests, unlike all other years in which those determinations were either absent or non-coincident. But we still do not know very well what they were, nor how.

The movement, starting from the sphere of commodity circulation, was not able (nor attempted) to transform conditions in order to create an expanding material community capable of potentializing the community of struggle to move beyond street protests into the relations of production. In other words, a community capable of undermining capitalist society in its productive base did not arise, not even embryonic. The way has been obstructed to create a new cosmopolitan mode of production capable of generalizing throughout the world by placing the productive forces as an expression of human needs and capabilities as ends in themselves. The absence of this had the necessary, inexorable effect of making that demonstration community degrade in an ideological, "citizen", "Brazilian" community.

This community of atomized, immaterial "wishes" is unable to find its force of union in itself. That is, the movement was doomed to be the plaything of inter-capitalist polarizations (left and right), doomed to let itself be driven by competition in the spectacle.

Fascistization began in June 2013 itself, [1] when the movement was not generalized materialistically from the outset, when it perpetuated in the spectacular parade at demonstrations.

Demonstrations are the terrain par excellence of the "free expression of the citizen", that is, of the so-called "middle class" (subsubdivided into "low low low" to "high high high", meaning everyone). In capitalist society there is only "middle class," since in it there is only the freedom and equality of sellers and buyers of commodities, no matter that one has no commodity to sell and is forced by the need to survive to make oneself a commodity that voluntarily sells oneself in the labor market.

Only if the movement had been generalized by shaking and traversing all the compartments of capitalist society (work, school, family, borders, State, etc.) could it open an emancipatory, libertarian dimension, imposing the satisfaction of needs and the development of human faculties: the emergence of the proletariat as an autonomous class against the ruling class everywhere, the irresistible irruption of generalized communism.

Since this did not happen, the movement continued to be a "citizen" movement and, consequently, a "middle class", hence fascist movement, because free and equal sellers and buyers are above all competing. They need to cling to everything that affirms their exclusivity vis-a-vis their competitors to ensure their survival, regardless of ideology being declared (left, right, etc.).

To summarize: in June 2013, from the beginning, there was a great fetishization of street demonstrations. The perspective of generalization of the movement in order to create a material association including the proletarians everywhere to transform the relations of production was not expressed, or at least remained isolated and impossible to be expressed publicly. The seed was already rotten. And while the demonstrations continued to be mere demonstrations, the rotten seed germinated at the end of the month, on the 20th, 1 dragging behind it all the spectrum of "citizenship", opening the doors of hell, the reactionarism that continues to this day in a consistent and increasingly worrying way.

Hey Libcom, I'm here to tell you and other anarchist groups outside Brazil that today the 23 persecuted anarchist and marxist activists in Rio de Janeiro were condemned from 7 to 13 years in the first instance court. The mainstream media must be overjoyed, but I bet most of the left wont say much, as it is now election year and the uprisings of 2013 and 2014 are viewed as fascist events by electoral parties because they were anti-vanguardist, anti-institutional and were strongly critical of political representation and organizations and unions leaded by electoral parties, although it were also strongly anti-police, anti-authoritarian and critical of all who supported our past dictatorship. A view strangely echoed by blog Humanaesfera whose your site translated into English. An analysis that was unable to see the masses of favela dwellers who were in the streets protesting against their own subjugation from June 2013 to July 2014. Which was unable to see the period in Brazilian history with one of the biggest number of strikes, including wildcat ones. Which was unable to see the advent of horizontal occupations where people from slums and middle-class came together to see how it is to try and build a reality without masters. All such myopia because in one day in June of 2013, there were so many people in the streets that part of that people didn't know what was that about. Saying 2013-14 were fascist uprisings is the view of PT, ousted in 2016 after a series of demonstrations in high-class neighborhoods sponsored by Students for Liberty, right-wing parties, pro-dictatorship groups and the federation of industrialists. Thus PT defends that 2013 was the beginning of the end, even though the diametrical difference in the nature between 2013 and 2016 I pointed out just now. (That's why PT usually says the black bloc in 2013 and 2014 was a paid organization and must be pleased with the sentences against radical demonstrators.)

Have in mind that "middle class" in Brazil means making at least R$291 a month. R$ 1 = US$ 0.258. Of course, considering middle class pretty much almost any person under late capitalism that does not owns the means of production as Humanaesfera does, one should stop expecting any opportunity for change, because one'll never have a perfect scenario to even begin political and social work. Implying that "low low low middle class", aka too fucking poor for global north standards, protesting in the streets is fascist in nature is too offensive to fathom that Humanaesfera, as anarchists, implies it.

Thanks to such kind of analysis, the politically persecuted have nowhere to expect support from.

Now my friends are again exposed at public square for the moral lynching. Although they are still able to appeal, If I were one of them, I would have already killed my self in anxiety and disgust. But what do I know? I've already been convicted, I'm appealing, gonna be condemned again and I'm still here... But I only got community service and the ban from the Rio de Janeiro state public education network for having a record. They are in danger of saying goodbye to their daughters and sons.

I can't even bring myself to read this:
https://g1.globo.com/rj/rio-de-janeiro/noticia/tribunal-de-justica-do-rio-condena-a-prisao-ativistas-envolvidos-em-protestos-em-2013-e-2014-no-rio.ghtml

I like your site. I'm not mad at Libcom. I just have no one to vent about it. 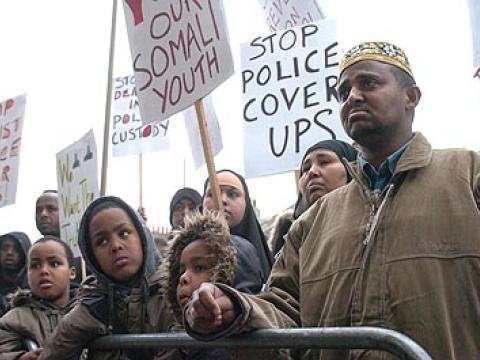 Demonstration against the death of Nuur Saeed in Plumstead, photos by Guido. See our news coverage for more information.

Pau, capital of Pyrénées-Atlantiques department in the South West of France saw between 9,500 and 15,000 march against labour casualisation earlier today.
Image 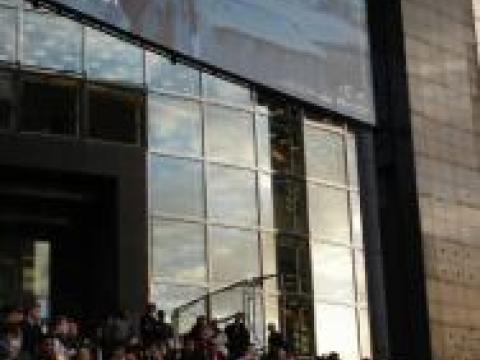