WHAT NEXT ? - Leaflet distributed during student occupation November 6th 2011

We present you a leaflet distributed during the faculty occupations in Belgrade during October/November this year. The reason for their existence were leftist attempts to use the confusion sparked by the question of organizing those willing to continue mutual activities during the decrease of the fighting readiness, and to form another student union. The leaflet suggests forming discussion groups - which are not permanent organizations, and have no program - as a way to further clarify positions and as a place for gatherings of the more active members of the protest. --BIROV

The real question which is circling within every student movement after the end of protest activities is how to continue the struggle for student interests. At first the logical conclusion would be that the struggle can live on by continuity of student assemblies as it was the case until now, but in the interest of preservation of gained position it is necessary to further analyse the consequences which are a product of such an idea and which are empirically affirmed.

Why is all of this important?

The tendency to implement student assemblies as an official form of student way of organizing have been noticed, it is ment for it to continue as yet another official student organization which would in theory continue to function even after the end of protest activities. This idea with itself draws very negative consequences of which have, unfortunately, our colleges from Zagreb (Croatia) been the witnesses of. Namely, after the end of occupation of Faculty of Philosophy in Zagreb their "Plenum" (student assembly) has in time degraded into a group of about thirty politicians who have privatized the tradition of a mass student movement and all its remaining resources. An institution like this is in the lack of mass number of participants very susceptible to misuse by various interest groups and is qualitatively different from mass assemblies we recognize during the protest itself.

Why does this happen?

The political consciousness in society as well as in student population itself is on a extremely low level. Students organize themselves in a militant movement in the time when for that needed energy is accumulated, meaning when the circumstances for that are formed. Concretely, organization of a protest is a consequence of acute problems which initiate the rebellion which itself later evolves in a mass movement. Aside the protest time it is rare for any of us to be active on the student issues, by example, the turnout for student parliament elections is completely negligible and nearly anyone could join it if, for example, he just voted for himself, never the less, no one does it. The same, institutionalized assembly would end up with a small group of people who would take upon itself a role of official representatives of student interests as the student parliament itself does. It is important to realize the essence of things and every phenomenon call by its real name, institution of assembly aside the student protest would be no kind of mass organized assembly, but yet another harmful official student organization of union characteristics as the student parliament itself is.

DO WE NEED ANOTHER OFFICIAL STUDENT ORGANIZATION?

Beside the idea for an assembly to evolve in an official student organ, there are open attempts to impose the idea of student union. The critique of this idea is essentially the same as it is in case of the institution of assembly. The official student union would also be unable to include many students even if it would be organized on principles of direct democracy. If, on the other hand, the circumstances for a mass union organization of this character did exists there would be no need for it as the students could then again be free to organize themselves into assemblies which would initiate new protests. In the time when student protest forms itself again, an organization of this kind would be directly confronted with self-organized students and would try to take over the protest. The similar attempt we have seen in the beginning of occupations when the "parliamentarians" have been coming to assemblies with the same intention. All of these ideas are based on weak arguments contained in principles on which they are based on, but which are by these means not practicable. On the contrary, student rights have always most efficiently been achieved by the means of mass self-organized militant movements which have always been confronted with official student organizations whose goals are their own enlargement and thus political power, meaning the eventual attempts of protest takeover.

Education system reforms are heading in a direction which is directed against student interests and thus it is imperative that there will be future struggles for student interests. The only way which can help the student movement is forming of unofficial student groups which would aside the protest act educational on the student population, conduct the analysis of student struggle, student problems and gained experience, therefore leaving it for future protests. Such groups would with these activities in the same time grow its own potential and possibility of better and more efficient participation in the oncoming protests. The gained experience we must preserve for the future and the mistakes made we must not repeat ! 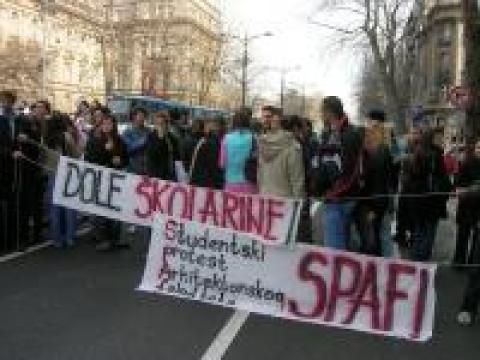 A participant's report of new student protests against neo-liberal "reforms" of the education sector. 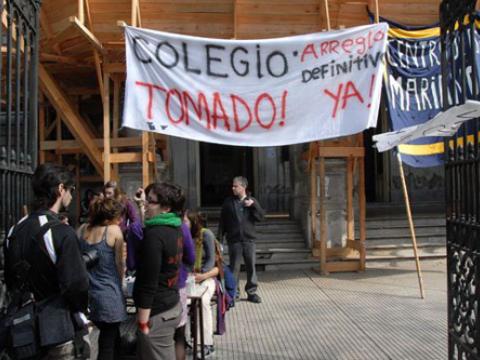 High School students struck and marched across Germany yesterday in protest against classroom overcrowding, lack of teachers, and the pressure of examinations.