This week on a recent episode of fight sport podcast No Holds Barred there's a section on the possibilities of organising boxers into a union. The discussion notes that other sports have unions and have had high-profile strikes but boxing has never had any noticable level of organising.

Like mixed martial arts (MMA), boxing, as an individual sport, with many promotions organising fights and the vast majority of fighters pretty much just earning a wage fight-to-fight (if they aren't supplementing it with another job, coaching, pimping themselves to sponsors etc). Jeff Monson spoke about the need for MMA fighters to organise.

I'd imagine there'd be similar specific issues for boxers to organise around – guaranteed minimum purses for fights, promotions covering costs for injured fighters (after all, the risks fighters take in the ring are much less than the promoters, but they are compensated very differently).

The interview with Carl Froch (fighting Andre Ward tomorrow) is a bit comical as he consistently gets 'union' mixed up with the idea of a professional association making good fights happen, or even just the idea of 'unifying' belts from different sanctioning bodies. The host does see the role of a union to be a collective of workers fighting for the shared interests but doesn't make that clear when interviewing Froch. Andre Ward says the idea would be 'awesome' but doesn't really mention why and implies that a collective of boxers might be able to resist corruption but doesn't elaborate.

Don't expect a thorough critique of the mediating role of reformist unions, it's a fight podcast. But none the less it'll be interesting to keep an eye on the attempts to organise what is a very individualised and overwhelmingly casualised sport.

Team sports seem to a have a longer history of organising and striking – footballers do it, and US team sports have done it more than most apparently, so what of an individual sport?

Other individualised sports have had threats of strikes in the last few years – Andy Murray threatened a tennis strike (over too many matches) in September, Formula One drivers did something similar in 2008 regarding licence fees* so it's not out of the question that an individualised sport like boxing could organise.

I fully admit my almost total ignorance about the history of boxing, though I do occasionally watch it. Has there been any previous attempts to organise boxers, even through mainstream unions? I'm assuming from the interviews with two super-middleweight world champions about the 'need for a union' means one doesn't exist, and the apparent ignorance about what a union might look like on Froch's part suggest there isn't even a culture of discussing that type of thing.
I'd be really interested in any previous attempts, what nature did they take, why did they fail etc?

* as far as I can tell, nothing came of either of those strike threats

While obviously very different to boxing (in that one's a sport and the other isn't, but also the size and nature of the industry), there have been some efforts made to unionise pro wrestlers in the UK, particularly around Alex Shane, the British Wrestling Council and the FWA.

Shakka Bunsie, head of digital media at the Old Vic, said: "British wrestling brought in a truly diverse audience to our “Coming Up” festival, with wrestling fans and theatre lovers cheering and heckling the performers together. The FWA has successfully demonstrated that a well-run and produced wrestling event is definitely total theatre."

Shortly following wrestling's début in the heart of London's theatre land, Equity bosses met on March 22 to pass their judgement on the spandex-wearing stars. The Equity Council agreed that pro wrestlers should be recognised as fulfilling the criteria for membership of their organisation.

Now the FWA has paved the way for the future of the British wrestling industry and created a level playing field for its performers to have the same rights as their counterparts in television, movies and theatre. This is an unprecedented step – even in the United States, professional wrestlers have never been members of a trade union. Many observers have argued that this lack of collective bargaining power has contributed to poor working conditions and the astonishingly high rate of premature deaths in the wrestling world.

(Discussion from a wrestling fan forum.)

Not sure if anything's really come of this, fwiw.

oh cheers I'll have a wee look at that later

Use to box in east end gyms years ago. Boxers will never form an effective union. It's all about the ego...a bit like anarchists...

On a boxing related theme; during the eighties I met and became friendly with a boxer and his coach at a pub in North London. They fought, not very successfully, at a lightweight level in the halls around Islington and the East End.
What was interesting was that they'd both been stable lads in the 10 week strike at Newmarket and Lambourn in 1975. The stable lads were working for peanuts (and still were after the TGWU negotiated settlement).
The strikers were in a minority and very militant and came right up the establishment on its own territory. One of their course protests were attacked by jockeys on horseback with Sir Lestor Piggot and Willie Carson leading the charge.
The two lads told me about various acts of sabotage and protest including the nicking of a bulldozer and razing part of the Newmarket with it. They were both sacked after the strike along with about 70 others.

fascinating stuff. there's a paper on the stable boys strike here which gives some background to the dispute, interesting that the way the work was structured had remained virtually unchanged since feudal times. Willie Carson was later pulled from his horse before he was due to race in the Newmarket 1000 guineas.

reminds me of this piece on the political economy of wrestling that mentions the detail that Jesse "the body" Ventura, later of Governor of Minnesota and Predator fame, tried to form a wrestlers union in the WWF before being grassed up by Hulk Hogan.

There's a contemporary piece here about a call for a professional wrestler's union here as well, but don't know anything more about it.

Fuck, I'd love to get boxers organised! Imagine a contingent of boxers showing up for picket line support!

SWEET DREAMS follows the story of Gary "Tiger" Balletto (27), a Rocky-like Italian-American figure with brutal punch but soft heart, as he struggles to juggle career and family, mentor an off-course bookie, and in his greatest fight of all, unionize the sport through J.A.B. (Joint Association of Boxers).

Spurred by the tragic death of friend Bobby Tomasello in the ring, Balletto campaigns for fighters to gain medical insurance, financial benefits and long-term futures outside the ropes with the help of the Teamster's Union. The film climaxes with a nationally televised ESPN2 fight in which Balletto puts his whole future on the line, delivering a fight scene that rivals any from ROCKY or RAGING BULL. 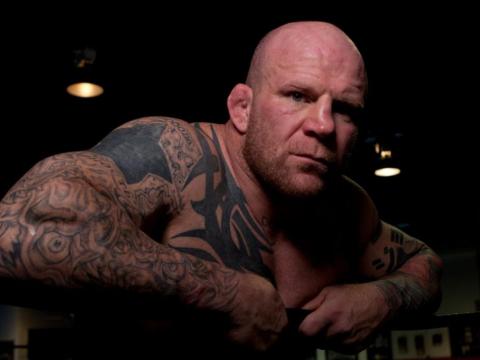 Jeff Monson was the guest on 'No Holds Barred' this week discussing politics,…
Image 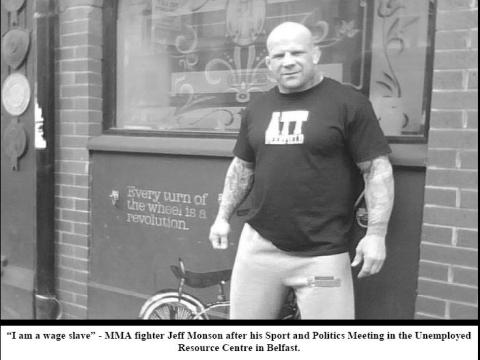 This article came out of a talk given in Belfast by anarchist MMA fighter Jeff Monson in March 2009. The article first appeared in issue 1 of The…
Image

The attempts to secure basic rights for mixed-martial arts fighters continue in the US.
Image 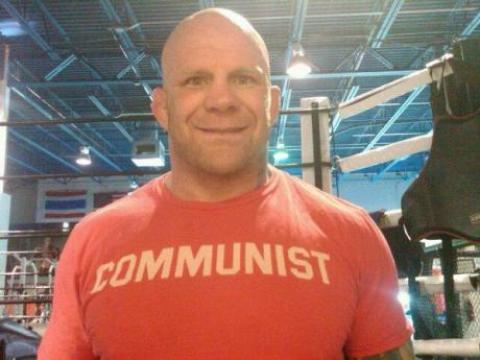