- More than battles, sometimes the challenge is to pick battle-fields -

All across Europe, youth, workers, the unemployed, retirees, migrants and families are today facing the same bleak army of austerity measures, capitalist backlash and police brutality. Like the British Prime Minister loves to say, in this historical moment the European lower and middle classes truly are ‘all in this together’.

Our common enemy is clearly identifiable, as it has been for a long time now. However, its shape has changed over the years, as if it underwent a virtual revolution that turned its body into an omnipresent and infinitely multipliable presence. Financial capitalism is everywhere, from pension funds to house mortgages. Multinational corporations have expanded their tentacles to every aspect of human life, from the prison system to baby food. The security apparatus has gone well beyond the empty dream of the panopticum, creating a real presence in every corner of the physical, digital and cultural world. The arrogance of the State has combined the disappearance of the welfare system with the epidemic of thought-control and social cleansing. The carelessness of global industries has managed to pollute all layers of the biosphere, from the waters of the Niger delta to the air of Beijing.

Within this scenario, although we all share the same battle against totalitarian capitalism, the number of battle-fields where our struggle is needed have increased exponentially. If we are to understand this through a military metaphor, we might say that our troops, although numerous, are currently overstretched, constantly running around chasing ghosts and ever-changing mirages of the enemy. Athens, Rome, Paris, Madrid, Lisbon, London, and even Tunis and Cairo. How is it possible to imagine a successful strategy, if we are to fight at the same time in so many different places?

Let us go back to a past that, though not recent, resembles in great part our current situation. In 1936, the whole of Europe was confronted by one, extremely threatening enemy: totalitarian fascism. Many countries were already lost, and more were to be lost soon. Italy had already been under the fascist heel for more than a decade, Portugal for exactly ten years, Germany had been conquered by the Nazis just three years before, and countries like Britain were heavily flirting with the possibility of shifting towards similar types of regimes. In that year, general Francisco Franco launched his attack against the Spanish Republic, quickly gaining the support of Italy and Germany and threatening to bring fascism to yet another European country. Although the European civil society was facing that same enemy on numerous grounds, the choice of Spain as the ultimate battle-field became immediately apparent. Having identified one specific battle as the heart of a broader struggle, thousands of anti-fascist militants, who were powerless in their own countries, could finally join forces and use their energy for a better aim than solitary frustration or suicidal heroism. At that time, on the wave of the Communist International, they decided to name this joint effort International Brigades.

What could we learn from that lesson today? Certainly, the first thing to be learnt is that a struggle, even if it is just, is not necessarily destined to end victoriously. We must remember how the war against fascism wasn’t won by international solidarity groups, but by an alliance of militarized nation States – which, in fact, turned post-war Europe into a heavily State-controlled, capitalist continent rather than the anarcho-socialist dream of the anti-fascist partisans. Most of all, though, we should look at the example of the Spanish Civil war as a reminder that, in certain historical moments, it is necessary to identify one, shared battle-field, in which forces from all countries can converge. Where could today’s anti-austerity, anti-capitalist, anti-totalitarian International Brigades meet?

Once again, like in the 1930s, there is more choice than we would like to have. Some might say Greece, the first EU country to officially join the new Third World. Already equipped with hundreds of anarchist groups, countless social movements and organizations, Greece could certainly be a good candidate as the place where all our struggles could converge. Others might say Italy, where a corrupt, plutocratic government is finally crumbling under the weight of the economic crisis, while student and migrant riots are growing by the day. Italy has a strong, historic tradition of resistance struggle, together with a widespread anarchist culture, especially in the southern regions. Others, maybe more imaginatively, would say Monaco. The Principate is probably the most recognizable icon of the transnational capitalist class. It is a minuscule country, virtually without an army and with an incredibly powerful cultural connotation.

To this list, which could include many other territories, I would like to add the UK. Differently from the other examples, the quality of today’s United Kingdom does not lie in its potential for victory, but in its danger of turning into a massive defeat. Following the recent days of riots, the government has pressed down the accelerator on a set of social and security policies that threatens to bring the country back to an more dystopian version of the Victorian era. Rioters, said Cameron, will feel the full weight of the law. For the theft of two bottles of water, a 23 year-old was sentenced to six months in prison; an 18 year-old was given 6 weeks in prison for saying to a police officer ‘I’d smash you if you took your uniform off’, while 4 years in prison was given to two young men who had tried to incite rioting on their Facebook page. And so on, in a long list that numbers more than 2,300 arrests. Families of the arrested who receive any benefits from the government will lose them, and the eviction notices from their council houses have already been sent. Cameron has clearly spoken about a ‘security and social fight-back’ from the government against the breeding-places of such revolts – the poorest neighbourhoods of the country - and has already called American ‘supercop’ Bill Bratton to enforce a generalized zero-tolerance regime across the UK. And all this, while the City of London is still at the heart of the global financial system, hosting legions of bankers and speculators, busy as always looting the world economy and ecosystem.

The progressive militarization of the UK, its ever tougher immigration policies, the uncompromising social cleansing of the lower classes through government decrees and urban gentrification, the unprecedented attack to public education and the health service, together with the shameless privileges enjoyed by the upper classes and global corporations, clearly define Britain as the laboratory for tomorrow’s post-crisis Europe. The UK is not Greece, it is a pacified, normal, First-World country. If the totalitarian capitalist project succeeds in Britain, the rest of Europe will have a ‘functioning’ model to follow, which will soon lead to even harsher measures in all member and member candidate EU countries. A defeat in the UK will be an extremely dangerous step towards a general defeat across the whole continent. For this reason, I believe that the UK should be our ground of choice for a collective, international struggle. Just like Spain in the 1930s, the United Kingdom should become the destination for the new International Brigades.

How can we imagine International Brigades to function today, in a situation of non-military civil unrest? I believe that the practice of struggle, today, should be that of prefigurative politics rather than of armed conflict, in the sense of an immediate implementation of models of life that are already utopian. Of course, the relevance of such examples of post-capitalist life is proportional to their diffusion and their size. Because of the Schengen agreements for free circulation within the EU and of the availability of cheap transport, it is now possible to imagine internal migrations on a scale that was never possible before. For instance, virtually every young, unemployed person in any European country could quickly and cheaply move to the United Kingdom for an indefinite period of time. The UK could be flooded with masses of radicals with little to lose and ‘a world to win’. Considering that youth unemployment rates in most European countries are around 20%, the numbers we are talking about could be truly astonishing. Once in the UK, this new wave of political migrants – aka New International Brigades – could soon create and gather around countless local projects in every area of the country. The suburbs of London, Manchester, Liverpool, Glasgow, Bristol, Brighton and of many other British cities offer plenty of opportunities for local direct action. Because of the numbers, squatting could increase dramatically, leading to the creation of social centres in most cities and of a strong network of cooperation across the whole island. Furthermore, the encounter of like-minded activists for an extended period of time – well over the short-termed experiences of anti-summit contestations – would lead to the development of new strategies of struggle and life, to the mestizaje of concepts, practices and solutions and to the creation of a truly grassroots alternative to the current structures of economic and social life.

Unemployed youth of Europe, look around yourself! What do you have to lose? A miserable life? Frustration? Powerlessness? Exploitation? Submission?
Retired peoples of Europe, look at your role! You are the last ones left with a pension and the availability of free time while still in good health. What are you going to do with the future that you have left? Watch TV? Think of the good old times when you were a radical? Plan your euthanasia?

The people of the United Kingdom, migrants and subjects of the Crown, need your help today! Come in the thousands, flood this land! Let us turn their bloodless dream of submission into the thriving experience of our liberated lives. Let us do it together, turning this country of policed citizens into a land where everyone is a foreigner, where everyone is at home. The time is running out, and we need to do it now. The troops of totalitarian capitalism, via their generals in Scotland Yard, the City and Downing Street, are reorganizing quickly. If we don’t act immediately, we risk losing this battle forever. Come by the thousands! Spread everywhere! Let us take them by surprise! Remember, as Sun Tzu used to say, ‘appear at points which the enemy must hasten to defend; march swiftly to places where you are not expected.’ 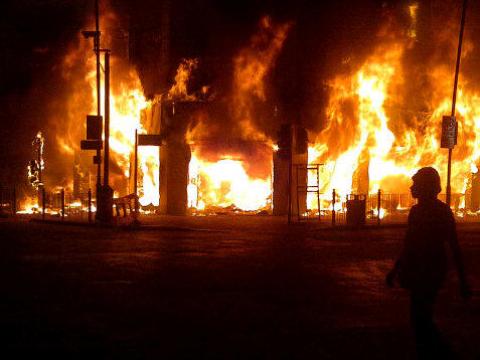 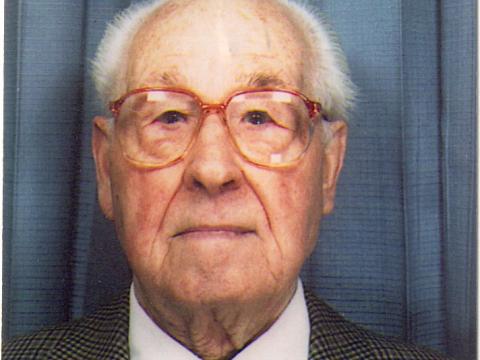 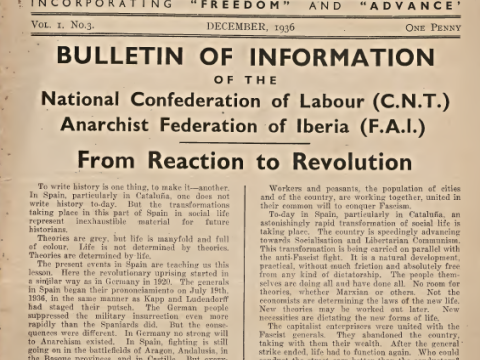 The third edition of Fighting-call, a journal of the Freedom Group and Anti-Parliamentary Communist Federation, from December 1936. 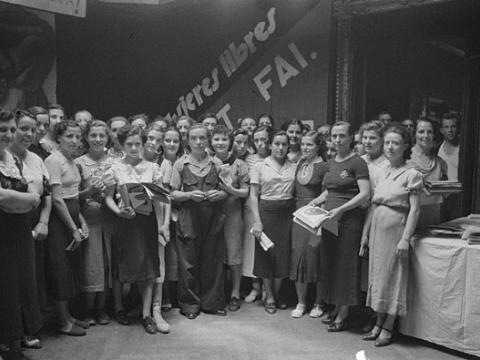