On 8 May 2019 around 300 protesters, mostly Uber and Lyft drivers, blocked Market Street in San Francisco in front of Uber's international headquarters as part of a global strike by drivers timed to coincide with Uber's IPO. This brief analysis attempts to situate these struggles against working class decomposition, with its roots in neoliberal deregulation, and the rise of so-called "gig economy" work.

The Decomposition of the U.S. Working Class: Deregulation, Uber and the Gig Economy

The strikes on 8 May 2019, as well as attempts in cities like Seattle and states like California to re-regulate the transport industry to allow unionization of drivers, require analysis of how the category of "independent contractors" came to be.

Here are some of the deregulatory changes that made "gig economy" jobs possible:

While Reagan often gets blamed for breaking up of many of these New Deal institutions, the process of Neoliberal changes actually began with Democratic president Jimmy Carter. The ideology is that human well-being is best provided by "liberating individual entrepreneurial freedoms" with stronger private property rights, free markets and free trade. It emphasizes "contractual relations in the marketplace," not regulations that limit and control markets for the purpose of redistribution of wealth.

The New Deal was based on the ideology of "trust busting" and preventing monopolization, even creating government-sanctioned cartelization of transportation industries. But it wasn't against capitalist social relations, it was against overproduction and crises created by cutthroat competition and attempted to stabilize markets -- including labor markets (dating back to the Interstate Commerce Act of 1887 -- and the commission it created lasted until 1996). But opposition to New Deal always existed. Much of this is the perennial urban-rural conflict in the U.S., that is deeply rooted in American culture. Much of Trump's recent victory came from his ability to exploit this conflict and tap into the petit-bourgeois tendencies in rural areas, even the desire for upward social mobility of the rural working class.

The Motor Carrier Act of 1935 did not apply to agricultural trucking, but conversely led to the Teamsters to have a monopoly of labor for all other kinds of truck-based shipping. The MCA exemption for trucking food led to rural food production, including relocation of stockyards for livestock and rural factories for processing all food products. Ironically, connections between rural food production, independent truckers and suburban supermarkets led to "anti-state market populism that defined late 20th century [American] capitalism." In this anti-authoritarian, anti-state, anti-union rural trucking culture there arose the ideology that gave birth in 1962 to Walmart and other new forms of distribution and retail in the same rural regions. Which spread across the planet, and with 2,300,000 employers is the world's largest private employer. And except for Chinese Walmart workers in the government ACFTU union, all of them are non-union. Walmart notoriously has jets ready in Bentonville, Arkansas to fly anti-union managers to suppress any organizing attempt anywhere in North America. It defines itself as offering individual "freedom" from unions.

In 1961 Mike Parkhurst created Overdrive magazine for owner-operator truckers who were opposed to the Teamsters, government regulation, and big Fordist corporations that had "strangled the healthy growth of the free enterprise system." This ideology, which in rural areas grew into support for Carter/Reagan era deregulation, is the same as what Silicon Valley financiers promote today for the "gig" economy. Overdrive and Parkhurst were part of the successful efforts to pass the deregulatory Motor Carrier Act of 1980, but strangely it was authored in Congress by Ted Kennedy, it was supported by the NAACP and Ralph Nader in the name of lowering prices for consumers, and studies by the Brookings Institution claim that MCA and the Staggers Act in 1980 both transferred $20 billion dollars from unionized and benefited workers back to the ruling class. Today, railroaders work still retain decent benefits but truckers, especially non-union independent contractors, operate in poverty. It was a way to externalize the costs of owning and operating a truck onto its owner -- meaning that they receive "piece-rate" pay, with no deductions for Social Security, nor do they accrue other benefits like unemployment and disability insurance, and unless they retire having saved money themselves, there are no pension or medical benefits.

The gig economy, like AirBnB, Uber, Lyft and all the other forms of labor disguised as "independent-contractor" work, is a result of all the above efforts to destroy labor protections of the New Deal and make labor more precarious and benefitless. And like Walmart's use of labor whenever it needs it, there are no stable schedules and workers labor power is only exploited when the bosses need it. Many of the "sharing economy" firms, many now basing their gig economy companies in San Francisco, got their start-up financing from venture capitalists like Peter Thiel and Y Combinator. Thiel co-founded Paypal in 1999 and part of his goal was not only radical deregulation, but also "disrupting" traditional industries. He want to "lessen the control of government over money" by turning his company into an initiator of Schumpeterian "creative destruction." He said "I knew Milton Friedman, so that's probably the one I'm personally the most biased towards." Thiel's belief system is as "a mixture of unapologetic selfishness and economic Darwinism," and he was one of the only Silicon Valley supporters of Trump. He wants a return to the classic economic thinking of the 19th and 20th centuries, matched with his contemporary Libertarian ideas based on Ayn Rand, of unregulated exploitation of the working class.

The bosses running Uber and Lyft, like Thiel (an investor in the latter), create the fiction that drivers are entrepreneurs running their own companies. But this has been challenged with slowly increasing success. The port truckers at the massive Los Angeles/Long Beach port complex, calling themselves troqueros (the ones who shut the port down by 95% on May Day 2006!), have been challenging their independent owner-operator status, legally both with the Internal Revenue Service and the Social Security Administration. The IRS defines an independent contractor as someone who can control: 1.) the time, 2.) the place and 3.) the manner in which they perform their work. Since troqueros -- and Uber/Lyft drivers -- are doing piece-rate work, where the boss-dispatcher/algorithm defines when they need to perform the work, where work the work goes, and has requirements about the manner the job must be performed, the IRS has forced some trucking companies to reclassify truck drivers as waged "employees" and the bosses have had to retroactively pay drivers back for the benefits they didn't get.

The SSA has declared some truckers trying to retire weren't paid properly -- declaring them as "employees" as well -- and has forced some trucking firms to pay back benefits. But this is a legalistic solution where the results are individual. Yet the LA/Long Beach troqueros have had many strikes and forms or collective direct action since the mid-1980s. The latter should be a model for the Uber/Lyft drivers to emulate.The rideshare driver organizers in Los Angeles started creating security protocols to prevent boss infiltration years ago, so that Uber/Lyft drivers can communicate and coordinate among themselves. The result of their bottom-up rank-and-file organizing was the global strike on 8 May 2019. While not perfect, it is a start. 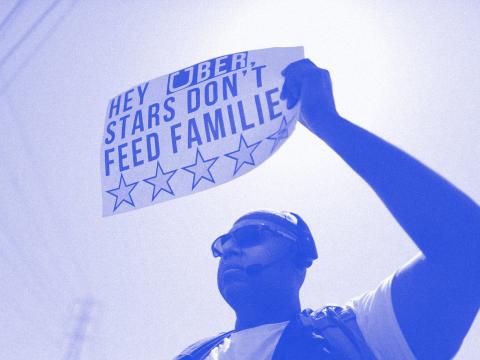 On May 8th, workers are organizing a national single day strike against rideshare…
Image 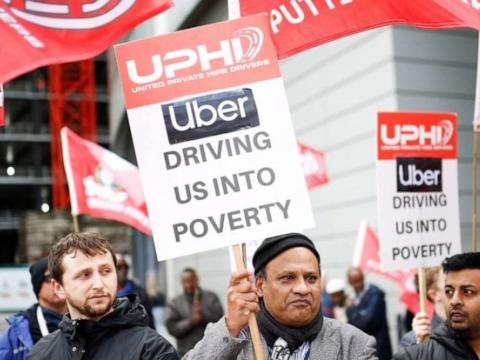 An article from the Organizing Work blog, critically analyzing the recent Uber/Lyft strikes. This article focuses on the US experience, and doesn…
Image A lot of discussion around Lyft Shuttle derides it for doing little more than reinvent the city bus. What this forgets, however, is that transit…
Image 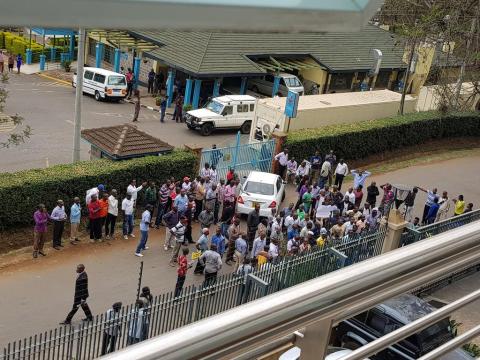 Drivers for Uber, Taxify, Little and Mondo-Ride have been on indefinite strike since 11th September over working conditions and high commission…