A translation of a communique from the anarcho-syndicalist union the CNT-France, calling for a unified response to the attacks upon worker's rights in France.

The CNT calls for a strike and demonstrations on Wednesday March 22 against the proposed law for the "prevention of delinquency".

This law which will be voted upon in Parliament at the end of March , is based on the Bénisti report, a text that Nicolas Sarkozy gave to the Prime Minister in December and on the last report of the INSERM entitled "behavioural problems with children in teenagers" The latter led to the petition "No 0 out of 10 for behaviour for the under threes" which to date has gathered more than 100,000 signatures.

Already by creating, by decree, on January 17 2006, an Interdepartmental Committee for "Prevention of Delinquency", the government has reaffirmed its will to legislate on this issue.

At the same time, since March 16 2006, the members of Parliament have been discussing a reform of child welfare. This reform aims at making every government employee in the social, medico-social and Education sectors, agents of social control.

They call in particular for the suppression of professional confidentiality, in favour of "shared secrecy". Information concerning the users of public services (schools, SME, ESA, CIF etc...) will, from now on, be shared with the local Mayor who will become the controller of the local policy for the prevention of delinquency withing his local area, in particular within the framework of the CLSPD (Local Committee for Safety and the Prevention of Delinquency) and with the creation of a "council for the rights and duties of families". The mayor will be regarded as a professional within this network of "prevention".

This device will be accompanied measures to increasing the use of video surveillance and a closer cooperation with the CAF. The project also envisages the creation of "boarding schools of excellence." Legally it also calls for the introduction of penal sanctions for those as young as 10, obligatory education for all prisoners and for the re-establishment of collective punishment for serious acts against prison authorities (a return of the anti-riot law).

The secondary-school pupil movement of 2005, the revolts in the banlieues last autumn, which are still on-going, the student movement, one can easily see that the young people are the main target of this vast project for the criminalisation of youth and poverty.

For the continuation of the fight against the "law for equal opportunity", the CPE and the CNE and to prevent the installation of these reactionary projects, the CNT, with "the Unit National Collective Against the Denouncement", the CNT callls for the employees, the students, the high-school pupils, the unemployed, the casualised workers and undocumented immigrants to join the demonstration and strike called for Wednesday March 22, 2006. 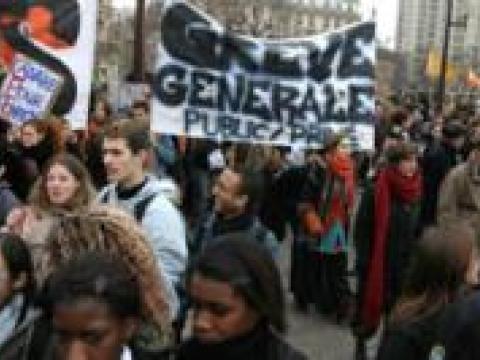 A translation of a communique issued by the CNT, a French anarcho-syndicalist union, about the on-going struggle against the CPE.

Violence against demonstrations in France

Police units attack anti-CPE demonstration and anarchists are arrested as repression against the movement steps up.

The tax offices of Caen have been occupied by 300 students between 3 and 5pm in protest against the contract of first employmeny (CPE) and all the casual and precarious contracts.