The state of the union is …unequal

An article by Mike Harris on the recent "State of the Union" address by President Obama, and the most recent fast food strikes and efforts at worker organizing in the US.

OK, so the “little person” has been fighting against wage theft, low wages, and harsh working and living conditions for years. Sometimes alone and lonely, sometimes collectively and in a self-managed way. For the past year or so, mainstream labor, through various grass-roots and top-down efforts has tried to coordinate the fight against poverty wages. Through a string of events in the fall of 2013, various campaigns engaged in this theme of subterranean pay rates.

Obama has sometimes countered the demands of nominally left-wing critics with an admonition to “make me do it.” As he prepares to deliver his State of the Union address, advance reports indicate that it will contain elements of mainstream labor’s issues. Perhaps the stagecraft, rather then shop floor organization, has acted as a “make me” moment for Obama.

I will not argue that any gains made by poor working class folks are a bad thing. I surely do not subscribe to what, a century ago, was known as the “worse, better” notion: the worse you are, the better the chances are of convincing you to take militant and radical action. A bit more milk for the kids is never a bad thing.

However, I anticipate that with a little Presidential attention, and increasing political action away from the shop floor, a switching of the train tracks will occur, diverting attention from workplace organizing. Not that a lot of effort aimed at building shop floor unionism or shop floor committees has been undertaken to begin with. I predict that even less shop floor-oriented attention and action will occur. The shift towards a different game will be played up by the mainstream. In this new dynamic, institutional players will continue their role, only this time as part of the institutional soft left and trade unions, with a little wind in their sails and some solid public backing on their side.

No one should starve, that’s for sure. But the cycle of militant action channeled into the usual institutionalized relationships, developing as well as old, will still leave millions unorganized or, at best, mis-organized. The fight for a living wage is a fight for working class organization on the shop floor and in the communities. Direct struggle without intermediaries allows for continual betterment and, one hopes, a recognition that class struggle is constant, not open for periodic negotiations. Out of such struggle, an understanding develops that when we build committees in the workplaces that are worker-run, we are more likely to make the gains that we are seeking, rather then those mediated by others.

The issue of class inequality that was brought to the forefront by “Occupy Wall Street” and the hard work by the shop floor workers of the many early and real “alternative labor” movements are more radical and more threading then legislative campaigns. Yet sometimes it’s harder to stick to the basics. We all sometimes want someone else to do things for us. Sometimes we welcome those with resources and connections. Sometimes they deliver the goods …and they will always make you remember that they and not your early militancy and self-organization, brought the goods to the table.

Perhaps by way of legislation they have brought some good things to the table. Yet I suspect that a different vision, coupled with a push to organize on the shop floor and in the community, will win us a whole hell of a lot more than sitting back and just handing the keys to others and allowing them to drive us. The keys and the driver seat are there for the taking.

Thanks for getting this up.

No sooner had I penned the article, I open up my FB today..and what do I see? I believe this is the first time I actually have seen the specter of unionization raised in the fast food struggles of 2013. Not to say it hasn’t, I may have just not seen anything.

The Chicago based “Fight for 15 – Lucha por 15 WOCC” had a little graphic, with the saying “The only thing between a worker and a corporation is a union! Organize!” Is the message subliminal? A suggestion that, perhaps in Chicago, a different element is being introduced in the ff 15 Wage Campaign?

The issue of class inequality that was brought to the forefront by “Occupy Wall Street” and the hard work by the shop floor workers of the many early and real “alternative labor” movements are more radical and more threading then legislative campaigns. 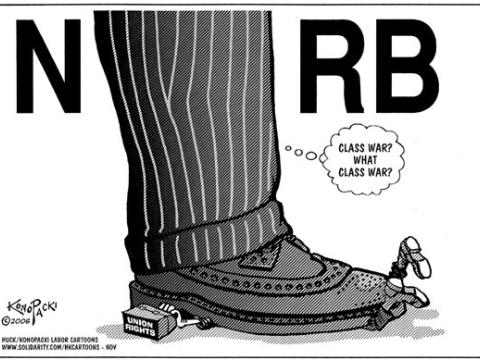 A discussion of the role of state intervention in the workers movement, an increasing approach of… 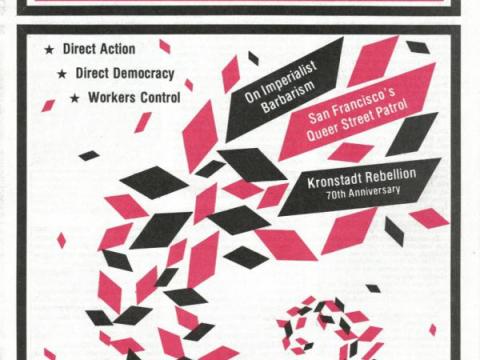 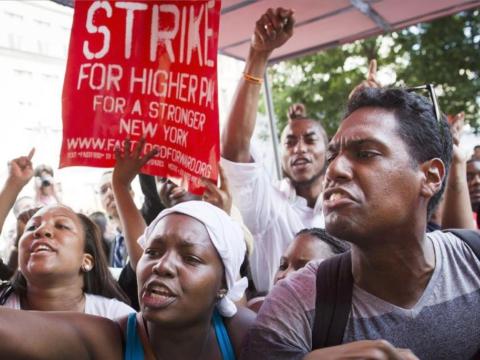 An article about the Fight For 15 campaign, and how radicals should relate to it. 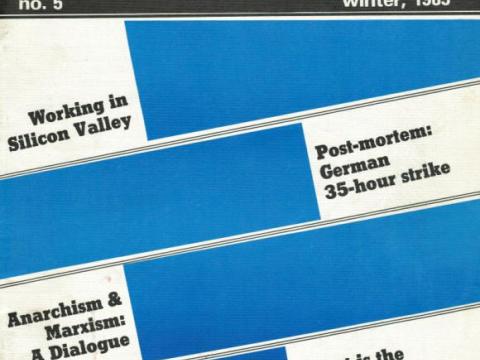 "Where do anarchists and marxists differ, and can we learn from each other? Dialogue between the Libertarian Workers Group and the Revolutionary…