Radical America #01.02: The workers produce all

Issue 2 of the first volume of Radical America published in September-October 1967, most articles concern the Industrial Workers of the World.

Hey, many thanks for this, just a quick note that the volume number should be written in two digit formats as there were more than nine volumes. And also the Radical America tag should be in the "authors/groups" box rather than the tags box. Cheers!

An article by Fred Thompson contesting the myth that the IWW was smashed by repression during World War I.

There is a widespread misunderstanding that the government and big business suppressed the IWW during World War I. They tried. They hurt and hampered, but they did not suppress. The record is a practical subject for study by those who find themselves unpopular with those in power today.

The IWW was used to the lawlessness of "law and order" from its birth in I905. In the summer of l9l9 opposition grew fierce. The IWW faced bullpens and stockades, mass "deportation" of the Bisbee miners to the desert of New Mexico, frequent arrest by immigration authorities of anyone suspected of being a foreigner, and the intervention of federal troops. In September the federal authorities raided the national office and all branch offices, collecting five tons of evidence to use against those it named and convicted on three mass indictments in Chicago, Wichita and Sacramento. In the immediate postwar years the IWW was victimized by what the Undersecretary of Labor called the "deportation delirium," by the general rabid anti-radicalism, by a lynching raid on the lumberworkers' hall in Centralia,, Washington, and subsequent manhunts, and even more by the passage of criminal syndicalism laws in various states and the arrest and trial through l923 of far more members under these state laws than had been tried under the earlier federal enactments. One can find this story detailed in the appropriate chapters of Perlman and Taft, History of Labor in the United States, Vol. IV;in Taft's article on Federal Trials of the IWW, Labor History, Winter, I962; or in Michael Johnson, “The I.W.W. and Wilsonian Democracy," Science § Society, Summer, I964; also in Eldridge Foster Dowell, History of Criminal Syndicalism in the United States; and most readably in KornbIuh's, "Rebel Voices."

During all this repression the IWW grew. Its peak membership was in 1923. It sunk rapidly the following year, not from repression which had eased, but from internal disputes. And it is still in there trying.

The academic fiction that the IWW was crippled by wartime persecution rests on an overestimate of wartime strength. The IWW has never been very large. Its smallness, coupled with the mark it has made on American labor history, shows a handful enrolled in it were more effective than if they had been enrolled elsewhere. Its prewar peak in l9l2, the year of the big Lawrence strike, was an average membership for the year of between eighteen and nineteen thousand. The defeat in Paterson took the last penny it could raise, and the depression that followed almost killed it in 1914. The European war helped it step up a campaign among agricultural workers in 1915, and to branch out into lumber and iron mines the following year, and to grow among copper miners and in the oil fields in l9l7. It tied up copper mining and, in the northwest lumber industry shortly before the September l9l7 raids.

The following calculation of membership from l9l6 through l924 is based on a percapita payment of seven and one half cents per month per member to the general organization. The periods used are those the national office used for cumulative financial statements, usually for the information of a general convention. The average dues-paying membership for any period would have been somewhat higher than that shown because some unions were always behind on percapita, and conventions usually "excused" the non-payment so it was not made up later. 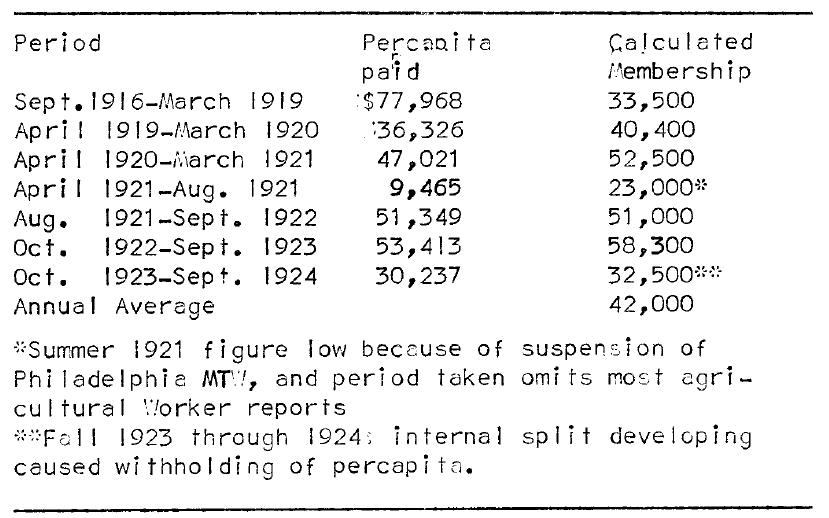 However, the purpose of this article is not to show how small the IWW has been, but to show that during this period of repression it actually grew. What gave the IWW this capacity to resist suppression?

Senator Borah spoke about the difficulty of jailing a mere understanding between workingmen. His oft- quoted remark gives part of the answer. The fact that the hardcore members of the IWW “knew what the score was”, and were dedicated to their ideals, must be counted,too. Democracy, organized self-reliance, and local autonomy explain more, and the fact that the employers wanted these men back at work explains still more.

Had the IWW been a highly centralized organization, the September l9l7 raids and the arrest of its officers, staff members, editors, speakers,etc, would likely have knocked it out. They were replaced, so far as they were replaced at all, by men direct from the point of production, who can be assumed to have sensed the feeling of the man on the job somewhat more accurately than their predecessors. Solidarity, the IWW paper, came out October 13, 1917 with a long list of those arrested, but the editor who replaced the jailed Ralph Chaplin had the good judgment to run on the first page the following wire from Philadelphia: “Out last night, Nef will be out today. Rush five thousand dues stamps and two thousand dues books --Doree.” From there on, there was a growing emphasis on the practical, and a discarding of leftish rhetoric, without ever losing sight of such ultimate aims as a new social order.

They proved it is very practical to provide as much local autonomy as the needs for coordinated effort can permit. The return to the woods in September, 1917 illustrates the point. The lumber workers had struck in early July. They were getting hungry, and weary of being run around by town bulls and federal troops and being herded into stockades. They decided to go back to the lumber camps and continue the struggle there. The outstanding demand was for the eight-hour day. Some took whistles with them, blew them at the end of eight hours, walked into camp, and, if they were fired, they switched places with men from other crews playing the same general sort of game, until they had eight hours, showers, better food, and better pay. There was no fixed pattern what to do, each crew used its own best judgment.

Neither repression nor resistance to it was uniform. The greatest efforts to get rid of the IWW came in the lumber, oil, copper and iron mining industries--places where unionism was relatively new. Where the IWW was organized in fields where unionism was more taken for granted, it continued, as on the docks of Philadelphia where it retained job control up to 1925, In the iron mines of the Mesaba Range and Michigan, its 1918 strike was met with a wage increase at the request of the government, to head off the strike. In the oil fields it fared poorest. In copper it was reduced to minority union status, but press accounts of postwar strikes assign it major influence. In the lumber Industry its strength grew, despite Centralia and the subsequent man-hunt, up to the calling of a strike by a "militant minority" against majority judgment in September I923. This radical disrespect for democracy in its ranks precipitated the destructive dissensions of I924 and proved far more harmful than all the efforts at repression and the membership soon recognized this fact.

The variation in resistance to repression should prove helpful in any full scale study of how to avoid getting suppressed. The IWW survived all this to engage in the first strike to unite all coal miners it Colorado (see McClurg in Labor History, Winter, l963); to efforts among the unemployed in the big depression to assure that they would strengthen picket lines instead of breaking them, thus stimulating the first instance of union growth during a depression; major organization efforts in Detroit and Cleveland, with steady job control--and union contracts--in metal working plants in the latter from I934 to I950. Since then its membership has been largely "two-card," with recent welcome input from the young new left, and a current determination to get back to its old specialty of "conditioning the job" under its own banner.