The strong Scottish strike of apprentices which help turn them from isolated individuals with no employment rights into organised, unionised workers.

Apprentices for some time had felt that they were drastically under paid and no more than a form of cheap labour. Apprentices’ wages ranged from 8/- to 19/- a week. In his first year he would be paid from 8/- to 12/- per week, a last year boy would receive 16/- to 19/-. Apprentices of 23 years of age would be paid 20/- per week. Boys in their last year would on most occasions be doing the same work as a skilled man but were paid 19/-. An apprentice plater in his last year would be paid 19/10 a week while two labourers working with him would be paid £2.7/- each per week. In some cases a boy could use up to 2/3rds of his wage in transport just getting to and from his job and his insurance, the remainder was to go towards his keep and put some money in his pocket.

The strike started on March 18th 1937 when 70 apprentices at Lobitz factory took strike action. On Wednesday March 31st, 500 apprentices walked out at the Fairfield Shipyard, Govan Glasgow. The involvement of Fairfields apprentices proved to be a catalyst for the strike as they were able to form mass pickets and encourage other apprentices to get involved. By Saturday 5,000 apprentices from over 60 firms had joined the strike. By the end of the following week 90% of the 14,000 apprentices from 130 firms in the Clydeside area were out on strike. The newspapers attempted to portray the strike as some sort of childish juvenile prank and it would soon blow over.

By the end of April, Govan apprentices had taken over an abandoned shop as their headquarters. The boys were aware of the fact that inactivity would erode support for the strike. An extensive communication system kept hundreds of apprentices involved in maintaining the strike. They organised the “Apprentices Olympics”, there was also a daily football league with 48 factory teams to help maintain enthusiasm for the strike. The original view that the boys’ strike would collapse because of lack of organisation was no longer held with any certainty. One union official stated that, “organisation among the boys was something wonderful”. Employers started to send letters to the parents of the boys worded in a similar manner as below:

“Dear Madam,
Your son John ceased work last week. We would like to draw your attention to the fact that unless he returns his action may endanger his future career.”

They also stated that the boys’ indentures made it unlawful for them to strike.

By April 7th, many firms were in difficulties through shortages of components normally produced by older apprentices. The situation was made worse by many journeymen refusing to do apprentices work. The engineers in Govan threatened to join the apprentices on the street if any adult was suspended because of hold-ups caused by the strike.

The strike was now spreading out from Clydeside. In Edinburgh apprentices, with support of the unions having endorsed the Clydeside Apprentices’ Charter, sent their demands to the employers and joined the strike. Apprentices in Middlesburgh and Newcastle followed and joined the strike. On April 12th, the Clydeside District Committee of the AEU and the Confederation of Shipbuilding & Engineering Unions offered support and strike pay to the apprentices. On Friday April 16th they added to that support by calling a one-day general strike. On the Clyde 100,000 men stopped work in support of the apprentices. The Glasgow Trades Council printed a special bulletin for sale to the public allowing the apprentices to put their case and counter the misrepresentation in the capitalist press. The Glasgow City Council granted permission for the apprentices to organise street collections. £320 was raised on the first collection, and the sale of the “Bulletin” raised a further £120.

The Confederation of Shipbuilding & Engineering Unions together with representatives from the Apprentices’ Strike Committee asked to meet the employers to discuss the apprentices demands. The employers refused, insisting on negotiating with each shipyard and each workshop separately. The unions decided to ban all overtime until the apprentices returned to work in victory. This put at risk the completion of £20 million of armaments under production on the Clyde. The strike’s aims gained considerably in strength when the AEU and other unions gave the strike official recognition. In the May 1st issue of “the Challenge”, the Apprentices Strike Committee stressed that the apprentices would not return until their wages demands have been met and the right of the unions to negotiate for the apprentices has been won. The employers’ refusal to negotiate with the apprentices’ leadership more or less changed the strike into a lock-out.

On the 30th of April, local union officials urged a mass meeting of strikers to resume work so that their grievances could be pursued through established channels. Failing this the officials predicted a gradual disorganised return to work, in which case the boys’ spokesmen would be victimised. In these circumstances the apprentices had no option but to reluctantly return to work. They agreed to re-start work on the 5th of May 1937. The employers responded by introducing a new minimum apprentice wage scale ranging from 12/6 to 27/-. While the employers conceded wage rises, the apprentices’ strike had confirmed their aversion to trade union representation for apprentices.

In spite of hostility from the AEU leadership, the Clydeside Apprentices’ Strike Committee remained active through the summer of 1937, maintaining a skeletal organisation ready for any event. In September 1937 apprentices’ frustration at the failure of industrial relations procedures to resolve the issues raised by the Clydeside apprentices sparked a second wave of strikes, which swept through many main English engineering centres, such as Bolton (pictured, above). The English apprentices failed to generate the cohesive organisation shown during the Clydeside strike. English apprentices were more willing to settle at a factory level thereby abandoning the “Apprentices Charter”.

The 1937 apprentices strike transformed the status of apprentices from separate individuals with practically no employment rights, to unionised workers. The apprentices were not forced back to work on the employers’ terms; they succeeded in forcing major concessions on earnings and trade union rights from the employers. 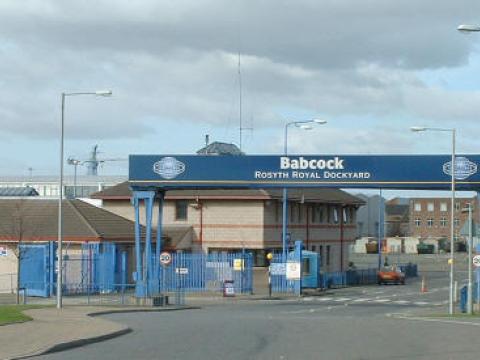 After a wildcat strike last month, 1200 workers at Rosyth Royal Dockyard have announced they are to ballot on industrial action in their dispute…