May 2014 is the eighteenth anniversary of the death of Albert Meltzer. To mark it, the Kate Sharpley Library collective have put together this (small) collection of quotes to salute our comrade.

The Anarchism I advocated from the start, and never varied from is that born of the class struggle, which was certainly taken into account by philosophers but came out of the working class. It had a proud fighting history in the struggle against Statism and every exploitative system.
I Couldn’t Paint Golden Angels page 174

There was by now a major difference as to what Anarchism was all about. Either it was a marble effigy of utopian ideals, to be admired and defined and even lived up to by some chosen individuals within the framework of a repressive society, or it was a fighting creed with a programme for breaking down repression.
I Couldn’t Paint Golden Angels page 104

On the newspaper industry

Fleet Street workers long held the cynical view that theirs is a lie factory and the extra money they get is like the extra for playing the piano in a whorehouse.
‘Mirror to Maxwell’ Black Flag no.139 page 5

Such were the restrictive practices denounced as being a restraint of the freedom of the press-lords to decide who should work and who shouldn’t that the management was not consulted as to our political reliability and the only test applied was whether we could do the job or not. This type of abuse of the employer’s natural rights was later held up by Tory propagandists as an example of union power at its worst.
I Couldn’t Paint Golden Angels page 170

Nobody criticised the trade unions more than I did whilst they were powerful. I plugged syndicalism for over half a century and for what my powers were worth never spared the lash on bureaucracy and reformism. In the Nineties legislation and unemployment have reduced their power no less surely than was done in fascist countries abroad during the Thirties. I can now see the worst union was better than the best political party, and their faults were as nothing compared with the absence of any form of workers’ defence.
I Couldn’t Paint Golden Angels page 373

When the ambitious have power, they preach self-sacrifice by others.
The Floodgates of Anarchy (with Stuart Christie), PM press edition page 32

The theme of politics is always the same - that one must work harder and get less.
The Floodgates of Anarchy (with Stuart Christie), PM press edition page 76

What above all is the curse of leadership is not the leaders themselves, but agreement to being led blindly — not the faults of the shepherd but the meekness of the sheep.
Anarchism: Arguments for and against (2nd ed.) page 59

It is obviously sometimes necessary to use violence, since laying down a code that says one may not use it in any circumstances leaves one helpless against attack. Everyone except an extreme pacifist would admit this, yet a different standard is laid down up for anarchists. It seems the official line, certainly the judicidal view, is they must either be believers in “mindless violence” or woolly-minded idealists, so-called “non-violent anarchists” or “violent” ones, as if 99.9 per cent recurring of the population were neither ultra-pacifists nor mad axe-wielders.
I Couldn’t Paint Golden Angels page 256-7

In our day ‘the Left’ has changed from having any association whatever with the working class and even from State socialism to meaning a package-deal of reforms and attitudes generally expected of a ‘progressive’ person with no class connotation.
Introduction to modern politics - Leftism Black Flag 146 17/12/1985 page 6

Are we calling these Intellectuals idiots? Who called these idiots Intellectual?
Liars and Liberals, Black Flag supplement page 3

On the meaning of ‘libertarian’

The name “libertarian” was still, at any rate in Spain, used only by the anarchists and syndicalists; the hi-jacking of the name by right wing private enterprise people not yet having become widely known outside the USA — it still signified “libertarian socialist” as opposed to “State socialist”.
I Couldn’t Paint Golden Angels page 233

On the far right

I moved in the early Seventies to a Greenwich council flat, and was there when a widely-advertised fascist march took place, passing a few streets away in Lewisham which had a high proportion of Black residents, As usual, it was more a police demonstration guarding bussed-in fascists marching between their lines.
I Couldn’t Paint Golden Angels page 290

On the political police

Many subsequent experiences show that the British secret political police, if not the worst in the world, are the most secret. The writer C. S. Lewis says the greatest success of the Devil is to persuade people he doesn’t exist, which makes it easier to get them to obey him. I never had any experience of this, but it certainly applies to the secret political police. Perhaps Lewis was understandably confusing the two.
I Couldn’t Paint Golden Angels page 86

Our historical judgement was criticised as based only on anecdotal history from veterans but knowing how conventional history is concocted I doubt if it suffered from that.
I Couldn’t Paint Golden Angels page 182-3

‘Research’ often means looking up dated reference books, and passing it off as knowledge.
I Couldn’t Paint Golden Angels page 166

Working-class theoreticians who express and formulate theories are totally ignored as of no consequence: what they say is attributed to the next available “Intellectual”.
‘Only a few intellectuals’ Black Flag v3n19 page 7 April 1975

The histories of whole peoples were wiped out for precisely the same reason that the history of the working class movement in recent times is wiped out: it does not suit the conquerors for it to be known, because traditions keep alive the spirit of revolt.
Review of British syndicalism by Bob Holton, Cienfuegos Press Anarchist Review no.2 page 16 (1977)

‘My atheism renders me quite immune from the religious dope that draws fine distinctions between the “glory” of the trenches and the “horror” of the barricades. I believe in the class-war, whether you like it or not. I have decided myself, in the tribunal of my own reason, that I will not support imperialist war. No decision of this tribunal can make me decide to support imperialist war and oppose class war. Whatever decision this tribunal may make, my decision remains unalterable.
‘As a believer in anarchism, I want to see a world in which violence, the organised violence of State and warfare, is abolished, and I would only use violence in defence of the revolution. Today I have no desire other than to live in peace: I believe in the old French slogan, “War to the palaces, peace to the cottages.”* Even if you made me take up arms, you still could not make me alter that policy.’

The Anarchism I advocated from the start, and never varied from is that born of the class struggle, which was certainly taken into account by philosophers but came out of the working class. It had a proud fighting history in the struggle against Statism and every exploitative system. 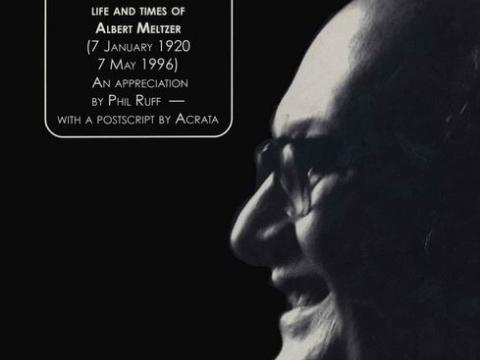 Review: The Albert memorial: the anarchist life and times of Albert Meltzer (1920-1996) an appreciation - Phil Ruff

A review of Philip Ruff's book The Albert Memorial: The Anarchist Life and Times of…