The class struggle hits the road

Subversion on the anti-roads movement, and its relation to the class struggle.

Part One The M66 in Manchester

Motorway madness has finally come to Manchester. The latest phase of the state's scheme to 'modernise' the road network is the completion of the ring round Manchester. This is taking the form of the extension to the M66.

This development cuts through fields, parks, schools and areas of housing. The council estate at Hollinwood, Oldham was turned into a dust bowl as the bulldozers and pile-drivers moved in. Residents found that work started at 7am every morning and carried on as long as it was light. Two local schools stood to loose chunks of their playing fields and one its gym. Streets of good housing were demolished. For many local people, the final straw was when they realised that this road was to go through Daisy Nook Country Park in the Medlock Valley. Predictably, this is a Site of Special Scientific Interest and is stunningly beautiful!

As well as threatening these areas, the motorway threatens to devastate other parts of Oldham and Rochdale. The building involves cuttings. The spoil from these will has to be dumped. Old quarries have been reopened to take care of this. Another plan is to dump in the Beale Valley, Oldham. This is an open area at the bottom of Sholver council estate. Having destroyed this area where local kids play, the council say they will reopen it in ten years time - as a golf course, for which local people will have to pay to use!

The fight back began when local activists called a picnic at Daisy Nook in June. Originally intended to test feeling, this was immediately transformed into a permanent camp. Over the summer an increasing number of, mostly local, people got involved. Their numbers were strengthened by a small number of eco-warriors.

Since the start of the camp there have been a number of successful actions against the motorway. Work on the Hollinwood site has been stopped on more than one occasion, much to the satisfaction of local residents who have felt powerless in dealing with this menace. Knowledge of the issues involved is spreading throughout the area.

Work on the motorway is progressing slowly. The contracts for the Daisy Nook development

Part Two Why are struggles against Motorways so important?

So why is the struggle against the state's plans for motorway expansion important?

If we are to believe the Leninist Left or the "Left Communists", it is a side issue to the "real" struggles in the workplace. If we take the views of greens at face value, then it is a struggle for sanity against motorway madness.

It is our contention that the struggle against the motorways is an important aspect of the class struggle today.

This is true for many reasons.

It is beyond the scope of this article to explain why, but capital (and the economy of nation states) quite literally needs to expand or die. When the government talk about expanding the economy being essential to the needs of Britain, they are quite literally stating the truth as far as capitalism is concerned.

An economy that does not "grow" cannot compete with its rivals. A company that does not constantly seek to cut costs and boost profit margins will see itself going to the wall. One of the main needs of capital; whether local, national or international is to drive down costs.

One simple way to drive down costs is to reduce the time it takes to make something. This means that investments are quickly turned into profits. The production process divides into two parts: production, and distribution. Distribution includes selling things and getting raw materials to factories and then the products to wholesalers and shops. A more "efficient" transport system (in terms of the time taken), a quicker turnover, means that the transformation of investment into profit is quicker too. Less is spent on storage, less on waiting. Money is available more quickly to buy the next lot of raw materials, to transport them, to make new products and then to move them again to sell them.

The need to cut down this time means at present that more and faster roads are constantly needed.

A good example of this is the delivery of materials according to the "Just-in-Time" principle.

Before the advent of the motorway network, factories all had large warehouses which stored the components needed in the production process. This was very costly as considerable investment sat around "doing nothing" until it was needed. The growth of computerisation changed this. Now it is possible for a factory to know exactly when a particular component is needed. A sub-contractor can be told to deliver on such-and-such a date, at such-and-such a time. Now there is no need for large warehouses. In effect the lorries have become mobile warehouses constantly moving on the motorway network. As a result, multinational companies are able to produce components where they can do so most efficiently. Thus if one needs labour intensive production it can be done where labour is cheapest, if it is hi-tech, then somewhere like Germany is preferable. The motor industry typifies this approach.

Not only are motorways needed to distribute materials to factories, they are also needed to circulate commodities. This includes the commodity that each of us has to sell, our labour power. Put it another way, capitalism needs roads to get us to work! These are often not motorways, but are urban routes that make life hell for those living near them and drive us mad trying to use them. As part of this, the car industry is probably the most important industry in developed economies, with interests of its own that it has the power to push.

The growth of bar-codes has led to this spreading to the food industry. No longer to supermarkets source their products locally. Instead it is cheaper for them to centralise packing at one point, to distribute to warehouses for redistribution to individual supermarkets as their computer generated models predict the food is needed. A recent Granada TV programme showed carrots being produced in Suffolk, transported to Preston for packing, then to Hertfordshire for loading onto lorries, before being delivered to a store in Ipswich - over 700 miles to do a 20 mile journey! Nonetheless it is more profitable to do this.

The European Union talks about an "Internal Market". What the EU wants is to integrate the various local and national capitals into one whole, the better to compete with other global capitals. "Efficient" communications is a vital part of this process. The talk is of a European Route Network. This allows for the greater efficiency of transport moving around the EU. To do this roads must be upgraded and widened - like the M6, M1, M42 and now the M66. Projects like the Channel Tunnel are undertaken with the eventual aim of providing a network linking Europe from Cork to Moscow.

A hundred years ago, production on the whole took place locally. Raw materials may have been imported, but power was locally produced (from coal), components were either produced on site or locally. This is no longer true. "Just-in-time", the roads and computers mean that everything is spread out to where it can be produced most cheaply. The various states take on the role of providing the warehouses, in the form of the road networks. In a sense, the whole of society has become the factory. Everywhere we go we are confronted with it, nowhere are we free from it.

So the road network is important for the current needs of modern capitalism. Unfortunately, those needs are in direct contrast to our needs. We need peace, quiet, fresh air and open spaces. All of these are threatened by the roads. We need good health - instead we get asthma. We need safe places for our kids - instead we are forced to keep them off the streets for fear of accidents. Over 4500 people a year die in Britain alone due to roads, worldwide the figure is nearer to one million. Our whole lives are becoming dominated by the needs of the roads and the motor industry.

When we fight back against road development we are hitting at capitalism's expansion needs. That is why the struggle is at the bottom a class struggle - a struggle by working class people against the needs of capital to dominate every aspect of our lives. By fighting the roads we are beginning the struggle to assert our own needs, a struggle that must eventually lead to the overthrow of this whole rotten system.

Footnote: If you want to read a more detailed analysis of the struggles against motorways, then we recommend you read Aufheben. Issues 3 and 4 contain excellent articles. They cost £2.00 each. Write to Aufheben c/o [address defunct]

Gridlock 1: Voices From the M27 Corridor

The following piece is a brief exploration of strategies of control and resistance around motorways. It will avoid the issues of pollution and environmental destruction usually associated with the roads battle and look at no less real struggles with more fundamental implications for the direction of class conflict.

Article from January 1997 in Subversion
Image 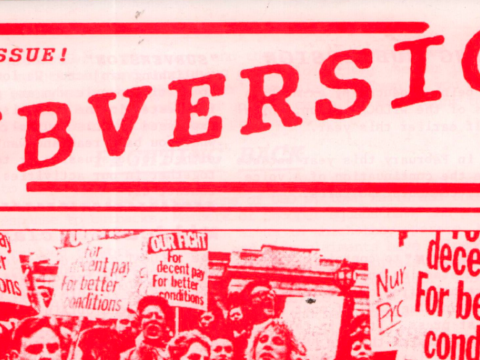 Complete online archive of issues and articles from the UK libertarian communist journal, Subversion, which was published in the late 1980s, and…

Green communism: responses and our reply

The article in Subversion #21, Green Communism, provoked a flurry of correspondence. Much of it attacked from a primitivist viewpoint. Here are two of the letters for publication. One was from Green Anarchist, the second was from ”JW”. Then, of course, comes Our Reply. From Subversion #22 (1997)