A column by Fred Chase comparing elements of the 1960s civil rights movement with the Detroit newspaper strike. Originally appeared in the Industrial Worker #1589 (March 1996).

"I ain't scared of your jails cuz I want my freedom." In honor of Black History Month there was a fine retrospective on the radio yesterday about the Student Non-violent Coordinating Committee during Mississippi Freedom Summer in 1964. Of course it mentioned the murder of three civil rights workers there, Schwerner, Chaney and Goodman. They were about my age, young men at the time. I was just coming into political consciousness. They already had theirs. I had just engaged in my first demonstration in Ypsilanti at Eastern Michigan University, a support march for the freedom fighters in the south. I knew I wanted to be involved in bringing about change. Those murders made me very aware of the potential price of freedom.

"I ain't scared of dying 'cuz I want my freedom!" the voice on the radio sings defiantly, but with a detectable tremor that tells me the singer was indeed scared of dying but wasn't going to let that deter him from his goal. And the former SNCC activists on the program told of how every once in a while they would be very scared of dying, but would suppress it by plunging back into their organizing. My personal heroes scare easily, but they don't deter easily.

Someone sent a postcard to General Headquarters recently. It has a picture of Mother Jones on it. She is quoted saying: "Pray for the dead and fight like hell for the living." Well, I'm not a praying man; but I do honor the dead while I'm fighting for the living. And those three names are branded into my consciousness. I can only imagine how many others were radicalized by their sacrifice.

They were part of a seminal movement. Their courage and that of thousands of others like them brought the beginning of the end of segregation. Of course it didn't end racism. That's a struggle which will no doubt always be with us. But they're part of a long line of people from the beginning of human time who have risked all for principles like freedom and justice. Their example inspired others to risk in other movements for the same principles. They were no doubt inspired by the risks of those who came before them.

I'm getting the feeling that a seminal movement today may be the struggle for economic justice.

And one of the key battlegrounds may be in Detroit where the strike against Gannett and Knight-Ridder drags into its 7th month. Detroit remains a relative stronghold in the U.S. labor movement. Close to a quarter of a million people in Southeast Michigan are Union. I have to wonder if that isn't the reason Detroit was chosen for this particular battle. If Gannett and Co. can bust the six striking unions at the Detroit News and Detroit Free Press, in the back yard of the UAW, in an area of Teamster strength, it will promote the illusion that they are invincible. And that will send a message of encouragement to other corporate giants that, if they haven't done so already, now's the time for the final drive to crush the unions.

Each of the Detroit papers has reported more than $50 million in losses and expectations of losing tens of millions more because of the strike. Yet a spokesperson from Gannett shrugs. The corporate giant which publishes U.S.A. Today can lose 50 million in Detroit and still report corporate profits of 70 million for the year.

Former Governor George Wallace of Alabama will be remembered for posturing in a schoolhouse door to block racial integration, his infamous comment: "Segregation today, segregation tomorrow, segregation forever!" George was proven wrong because of the courage of people like Schwerner, Chaney and Goodman. If people like them decide it's time to take a stand in today's struggle, the suits at Gannett and Knight-Ridder will be proven wrong as well.

There's talk of efforts to get the AFL-CIO high mucky-mucks to come back to Detroit to lead a march in the spring. And there's talk of using that march as a springboard for massive civil disobedience against the papers. There's even talk of promoting a general strike in Detroit. That kind of talk was starting to be heard last September when thousands of strikers and their supporters stood up to Sterling Heights cops and Vance Security goons at the Detroit News plant. It faded with the imposition of an injunction against mass picketing which the leaders of the striking unions decided to honor.

Now the NLRB has ruled the unions have engaged in an unfair labor practice by harrassing scabs. The Gannett spokesman says he hopes this will encourage the unions to change their tactics. It's certainly time to change tactics. The ones determined to be acceptable by the powers that be are bound to lose the strike for the workers.

So maybe it's time for civil disobedience and general strikes. And maybe talk of these or other actions shouldn't be limited to Detroit. Gannett is everywhere in the U.S. If it succeeds in busting the Detroit strike, it will use its deep pockets to fight the unions at its papers across the country. Of course we all know that the general strike is a romantic dream, an impractical theory. That's what I was taught in school. Apparently French workers aren't as well schooled as those of us in the United States.

See you on the picket line. 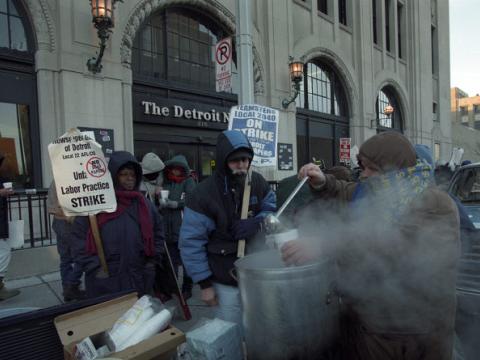 Leading us to defeat - Fred Chase

An article by Fred Chase about the issues in the Detroit newspaper strike. Originally appeared in the Industrial Worker #1585 (November 1995) 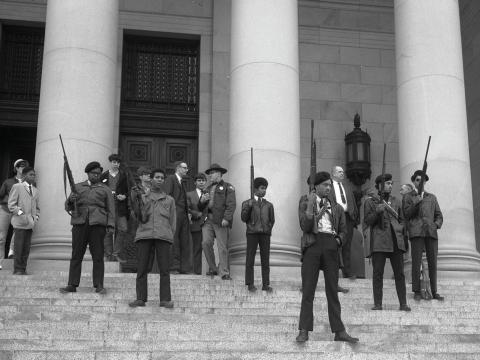 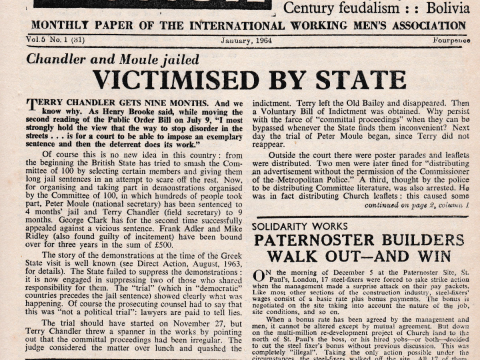 Volume 5, Issue 1 of Direct Action, with articles on Committee of 100 members being imprisoned, a strike by construction workers at St. Paul's… 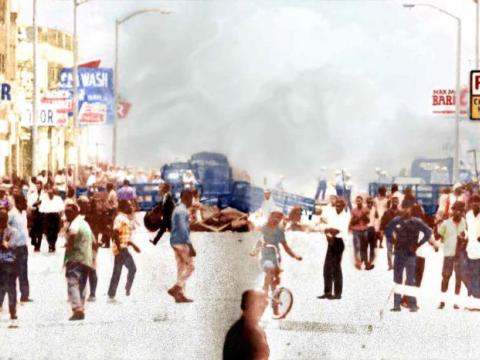