His Own Man - Jim Burns

ONE OF THOSE WHO HAS HAD HIS NAME LINKED with the "beats", without exactly welcoming it, is the American poet Gary Snyder. Published in many of the magazines which this movement has made their own, he is a friend of most of its leading members and was — under the name, Japhy Ryder — the hero of Jack Kerouac's novel "The Dharma Bums". Yet he remains his own man, content to lead his life as he wants to and, during the height of the interest in the group, spending his time quietly in a Zen Buddhist monastery in Japan. A closer look at him, however, reveals a fascinating personality, and a splendid poet.

Snyder was born in San Francisco in 1930 but, due to the depression, his family moved north to the Seattle area. Here they obtained a couple of acres of land and he grew up, as he says, "a farm boy"; his mother, though, was interested in literature and started him reading at an early age. Growing up, as he did, with the woods and mountains within easy reach, he became fascinated by nature and by the folk-lore of the American Indians. His readings further enhanced these interests and when he got the chance to go to Reed College on a scholarship, he took it and studied anthropology and literature getting "much involved with primitive religions, mythology, and primitive literature".

In the vacations from college he worked at various jobs — logger, seaman, and labourer — and continued his readings in Chinese poetry and history. In 1951 he came across some of the writings of D. T. Suzuki. Snyder, at that time, was supposed to be on a graduate fellowship at Indiana State University but after one term he decided that he was through with the academic world, and headed back for California. For the next five years he worked in the lumber camps in the mountains for a living, and in his spare time he wrote poetry and studied the Chinese language. In 1956 he made his first visit to Japan, staying for a year and then signing on in the merchant navy to get back to the U.S.A. where he spent some time in San Francisco (the period covered by "The Dharma Bums"). In 1959 he went back to Japan and, since then, he has spent most of his time there at the Zen Buddhist monastery in Kyoto. For a short time in 1962 he was in India with his friends Allen Ginsberg and Peter Orlovsky but returned to Japan soon after. There is, incidentally, an interesting article by Snyder about his visit to India in the first issue of "City Lights Journal".

As a poet, Snyder can hardly be called prolific — his two published books are "RipRap" (Origin Press, distributed by City Lights Books), and "Myths And Texts" (Totem Press, distributed by Corinth Books) — yet he is one of the best to come out of the U.S.A. in the last few years. "RipRap" contains much of his early work, dealing with his experiences in the logging camps, at sea, and in Kyoto, whilst "Myths And Texts", described by critic Bernard Bergonzi as being written "in a tough Poundian verse, laced with Zen", is a more ambitious effort which is mainly concerned with singing the virtues of an open air life, bringing in most of Snyder's interests as it does. It is full of references to Indian folk-lore, animals, the North-West and its people and history with, behind it all, Snyder's Zen leanings pushing the philosophical points home.
A small selection of Snyder's work was included in the Penguin anthology "Contemporary American Poetry" and, of course, there are poems in various magazines. He did some excellent translations, from the Chinese, of the poems of the 7th or 8th century Zen hermit, Han Shan, which are worth reading not only for their qualities as poetry but because of the insight they give into Snyder's attitudes. They were published in "Evergreen Review No.6".

Possibly the best description of Snyder's philosophy was made by the poet himself in an article called "Buddhist Anarchism" which he wrote for the "Journal For The Protection Of All Beings"*. In it he spoke of "a kind of committed disaffiliation" which would mean "resisting the lies and violence of the governments and their irresponsible employees. Fighting back with civil disobedience, pacifism, poetry, poverty — and violence, if it comes to a matter of clobbering some rampaging redneck or shoving a scab off the pier. Defending the right to smoke pot, eat peyote, be polygamous, polyandrous, or queer — and learning from the hip fallaheen peoples of Asia and Africa, attitudes and techniques banned by the Judaeo-Christian West. Respecting intelligence and learning, but not as greed or means to personal power. Working on one's own responsibility, no dualism of ends or means — never the agent of an ideology — but willing to join in group action. Forming the new society within the shell of the old". The last phrase is — as readers will know — an old Wobbly slogan.

Snyder once said "I don't mind hard work and being poor never bothered me. I guess that's what makes it possible to carry on like I do". A modest statement and one which is an illustration of his quiet integrity. It was the late e. e. cummings who said "To be nobody but yourself — in a world which is doing its best, night and day, to make you somebody else — means to fight the hardest battle which any human being can fight". It is to Gary Snyder's credit that he is fighting this battle.

* It is to be reproduced in a forthcoming ANARCHY —Ed. 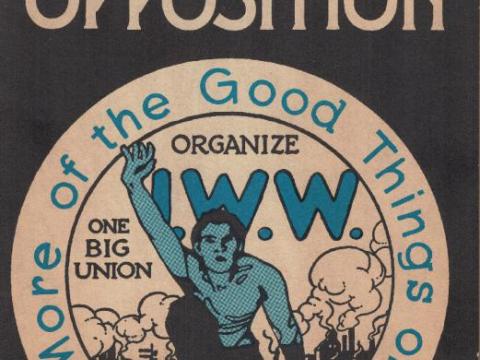 Issue No. 1 of Workers' Opposition, a publication produced by members of the Industrial Workers of the World (IWW) during the late 1970s in…