A Letter to Our German Comrades

A letter from Abahlali baseMjondolo to their comrades in Germany (they have close ties to Basta! in Wuppertal).

A Letter to Our German Comrades
Saturday 19 June 2010

Since 2005 we have been resisting as Abahlali baseMjondolo. We are struggling for equality and for dignity. We are struggling to put the human being at the centre of the world. Every person has the same right to contribute to making all the decisions that affect that person. Every person has the right to contribute freely and without fear to all discussions. People have the same right to justice and to dignity wherever they were born. The land and the wealth of this world must be shared by the people of this world. Obviously we do not want the rich to monopolise ownership of the land and the wealth. But we also do not want the state to own the land and the wealth for the people. We want the people to own and to manage the blessings and fruits of this world directly. Some of us call this a living communism.

The politic of equality, justice and freedom runs far deeper than the question of forcing the government to keep the promises that it has made to us on service delivery. But our politics is a living politics of the poor, by the poor and for the poor and so it must start with the demands that are most urgent for us and that are within our grasp. We do not want to struggle for the sake of struggling. We struggle to win, step by step. The demands that we have started with are that there must be:

*Land and decent housing in our cities.
*An end to transit camps and evictions.
*An end to government misallocation of people’s homes and fraud and corruptions.
*The provision of basic services such as refuse collection, electricity for all, road access for all, water and sanitation for all.
*Safety for women everywhere
*An end to all forms of the manufactured politic of fear. This means that there must be full freedom for everyone to express themselves and to organise and mobilise themselves without fear of attacks, arrests, losing their jobs or enduring the destruction of their homes.

After the recent attacks on our movement we are also demanding:

Our habit, our good habit, is that when ever we deicide to accept an invitation with comrades elsewhere we have a meeting where we share all of our thoughts, feelings and learnings with those who have been elected to represent our movement. The two comrades that we have delegated to visit Germany, Richard Pithouse and Zodwa Nsibande, are highly respected veterans of our movement. More than fifty other comrades met with them today to discuss their visit.

Before we say anything else we want to thank our German comrades for the support that they have given us as we confront repression. It is difficult to know what we would have done without this support. We also want to thank our German comrades for the very warm hospitality that they showed to Louisa Motha, Mnikelo Ndabankulu, David Ntseng and Mazwi Nzimande in Brazil. And we want to thank those comrades in Austria who have been translating our statements into German. There are many that want to stand for the poor but it takes a certain kind of person to stand with the poor. Solidarity with the organised poor is a different thing to supporting NGOs that want to think and speak for the poor. Misereor has our gratitude and respect for its support for the organised poor.

Busisiwe Mdlalose, Thembani Ngongoma and Philani Zungu have recently returned from Italy. Before that comrades from our movement have been hosted in Brazil, in England, in Thailand, in America, in Kenya, in Zimbabwe and in Turkey. We now have comrades in all these countries. We have noticed that our movement is becoming a hope for poor communities all over the world. At first we thought that we would be going to other countries to learn from other struggles and movements. But we realised that mostly people want to learn from us.

In England we found pictures and statements from Motala Heights up on the walls of the Camberwell Squatted Social Centre. In Italy we found our own words, words that were written in response to the xenophobic attacks in South Africa in 2008, on a pamphlet against xenophobia in Italy. We found that our struggles and statements had become international.

If we are a movement to be learnt from then it shows that there is a very long road ahead to really build the power of the poor. As much as we have built a real movement, become the strong poor, raised our voices, won real victories and survived repression we are still poor. We are still vulnerable to attacks. Even the rapid growth of our movement creates problems that have to be carefully and patiently worked out.

In the trips that we have made we have seen that some things are the same everywhere. There is a top down system everywhere in which politicians decide for the poor without allowing them to discuss and to decide for themselves. Everywhere most people who get education use it to become exploiters rather than the to build the struggle of the poor from within the movements of the poor. Everywhere the laws are being made tighter for the immigrants and the pressures on them are becoming greater. Everywhere political parties and NGOs are trying to co-opt people’s struggles for their own interests. Everywhere local struggles are operating in isolation, just managing to survive, and struggling without the resources to connect with other struggles.

We don’t only mandate our comrades who make these trips very carefully. They also have to report back very carefully. Often we get very encouraging news about comrades elsewhere who are struggling like we are struggling but then we can’t find ways to keep working together. This question of how to keep our struggles connected in a living solidarity is one that we need to keep working on. It is nice to send emails and text messages to each other from time to time but that is not a living solidarity.

In our own country we reject the NGOs and political leaders and organisations that want to take over all struggles to push their own agenda. But we work with all organisations that are willing to struggle together while allowing each movement to keep its identity and autonomy. We are doing this with other movements in the Poor People’s Alliance. Some movements in America have asked to join this alliance. But it is not clear how we can stay in real contact across such big distances when we are often organising in the middle of crisis and we always lack money for even the most urgent expenses. It is not even easy for us to arrange regular meetings of our own alliance. We need to discuss ways to connect all our movements together without giving up our autonomy to NGOs.

Right now there is a real excitement in our country because of the World Cup. The people that marketed the World Cup to us told us that it would bring jobs and an end to shack life. They were lying. There are less jobs and more shacks than when they told us these things. The poor will not benefit from the World Cup. When the World Cup is over we will still be living in shacks and transit camps. Our government has sold us and our country to FIFA. Our government has also used FIFA as a tool to further their attack on the poor. Street traders and security guards are really suffering at the moment. All the money that has been wasted on the World Cup, all the billions, is money that should have gone to the poor. The World Cup should have been organised with the poor to benefit the poor. Houses should have been built for the teams and the fans that could have then gone to the poor. Instead it has been made into a World Cup by and for the rich.

We often get the feeling that our government and other elites are embarrassed about us - that they would like to just bury us in a big hole in the ground. But it is very important that people understand that we were being evicted before the World Cup and that we will be evicted after the World Cup. The international Human Rights organisations and newspapers are not telling the real truth about our country when they blame all evictions on the World Cup. We can’t blame the World Cup for all our sorrows because we all know that when it has gone our sorrows will continue. In fact as Abahlali baseMjondolo we are currently fighting 99 different evictions - some effecting large numbers of families. None of these evictions are being caused by the World Cup. The real problem is that we are not recognised as people that count. The councillors are supposed to speak on our behalf but they just repress us. They are part of a top down system and not delegates of a bottom up system. We are not recognised because we have no power in a top down system. That is why we are building our power from the bottom up. We wish that the Human Rights organisations and the international media would also tell the story of the evictions that came before the World Cup and that will continue after the World Cup. We also wish that they would tell the story of how our movements are being repressed and how democracy is being denied to the poor.

All German comrades, including those already in South Africa for the World Cup, are welcome to visit our movements and our communities and to see the truth of our lives and struggles for themselves. We look forward to our movement getting to know more comrades in Germany, to being together, to learning from each other, being encouraged by each other and discussing all the challenges that our movements must confront.

We welcome all solidarity with real gratitude but we do not want to always be the ones that are receiving solidarity. We also want to support your struggles. We would like to discuss how our struggles can support each other.

Land & Freedom!
Nothing for Us Without Us!
A person is a person wherever they find themselves!" 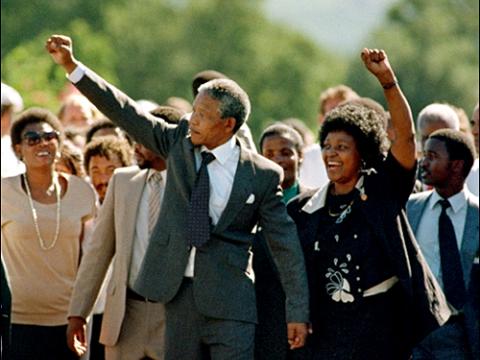 Abahlali: We were promised homes for all, not just for ANC party members 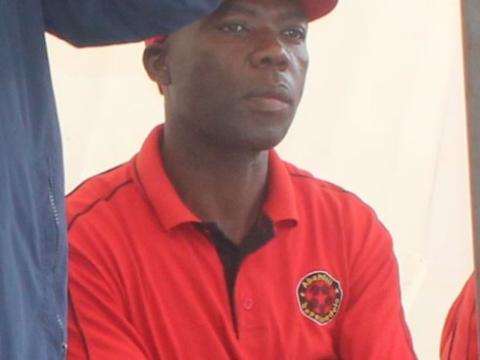 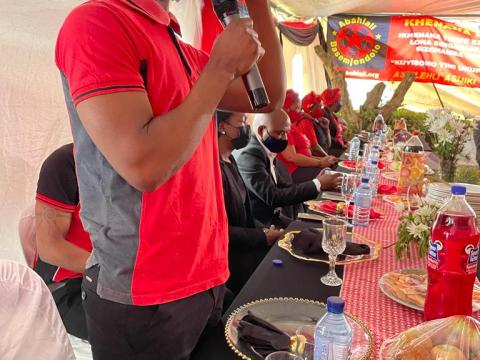 Statement of solidarity with the eKhenana Commune from Bishop Rubin Phillip

Bishop Rubin Phillip, a partisan of liberation theology and at one point the deputy to Steve Biko in… 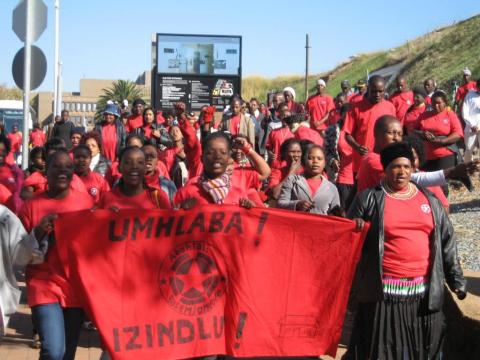 This lecture critiques devastating role of party politics in society which divides and controls people. It argues for living politics which…