So I'll say a wee bit about McDonalds and McDonalds Workers Resistance, MWR, and then Bouncer will say a bit about web activism and the role we think it should play. But firstly a big thanks to Chainworkers and the CUB for inviting us here, we are very grateful.

I want to say a bit about McDonalds but to emphasise that we don't agitate there because it is a nasty company, but because it is where we happened to work. We want to see all wage labourers organising.

One anecdote I think sums up McDonalds well...
One day at work a customer died. He was at the counter just waiting for his Big Mac, or whatever, and he had a heart attack and sadly he died. And as people were desperately trying to resuscitate this guy, other managers were running around shouting at us to keep cooking and selling food. So people were stepping over this guy's corpse to buy burgers. The guy had been dead for about fifteen minutes when they finally shut the store. Well, they took the body away, somebody mopped the floor and we were told to go back to work. Webel, one of the others in MWR, stood up very dramatically and said, "it is up to the workers whether we work", and pretty much the whole day shift walked out. Unfortunately nobody bothered to tell the night shift because we all went straight to the pub, but... We learn through such mistakes.

But I'm way ahead of myself because our first attempt at organising was four and a half years ago when we decided to try and start a union. I don't exactly remember why, it had something to do with unpaid bonuses. We collected signatures from forty workers out of a payroll about sixty but by the time we'd worked out what to do with the signatures, the staff turnover had been so great that we no longer had enough signatories.

This is a very important point. McDonalds has been in the UK for 25 years and there has never been one unionised. The established labour movement is too comfortable selling financial schemes to middle managers to want to organise young casualised workers.

MWR has always been an informal network with no formal membership or funds. It has also always been an underground group - we act covertly, communicate with pseudonyms and wear balaclavas when we're photographed. Otherwise we would all have been fired years ago. We uphold confrontation, direct action and internationalism as principles.

But it soon became clear that there was very little we could do at one restaurant and that we had to try and communicate with other McDonalds workers in the UK and around the world.

We've used various tactics to spread the word- we produced two issues of our magazine 'McSues' distributing 2,000 copies of each, we've used leaflets, stickers and graffiti, and of course, at the end of last year we built a large website.

MWR is now an international network with over 20 local groups, mainly in the UK but also in Canada, USA and Australia. We are in contact with a few hundred supportive McWorkers around the world. Last year we called an international mobilisation by the McDonalds workforce that finally took place last month. The day exceeded our expectations; indeed, so much happened that I don't have time to relate it here. However, we have written reports here for anyone who is interested.

I would also draw your attention to the information being circulated about the demonstration in Mexico that unfortunately resulted in 94 arrests. 70 people are still in urgent need of solidarity and I would encourage you to please, please, offer any support that you can, whether it be in the form of solidarity actions or financial aid.

Generally, however, the international McStrike was very inspiring and sent a clear message to ourselves and other workers- we will never compromise but we have enormous belief and optimism for the struggles that lie ahead. The internet has undoubtedly a very important role to play in those struggles...

Radical group of McDonalds employees, McDonalds Workers Resistance, give their analysis of trade unions and how their project differs. 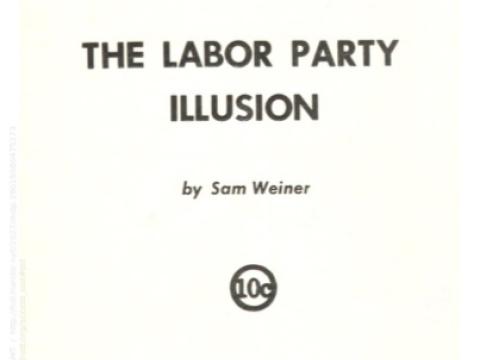 An article by Sam Dolgoff about the failure of worker's parties.

Amadeo Bordiga's thesis on the relationship of communist militants to the rest of the working class.