A brief introduction to the ideas of French-Belgian group Mouvement Communiste.

The condition of the working-class is the real basis and point of departure of all social movements of the present be cause it is the highest and most unconcealed pinnacle of the social misery existing in our day. … A knowledge of proletarian conditions is absolutely necessary to be able to provide solid ground for socialist theories, on the one hand, and for judgements about their right to exist, on the other; and to put an end to all sentimental dreams and fancies pro and con.
Friedrich Engels – The Condition of the Working Class in England, 1845

MC was created in 1988 by the fusion of two components : the first, in Belgium, was the product of a radical critique of ultraleft ideology, the other, in France, came out of the Italian operaist experience. The first two years of MC's existence were devoted to the work of reappropriation of Marxist concepts. Communist theory is always plunged into a deep crisis. This crisis is the fact of its distortion (class collaboration; nationalism; parliamentarism; pacifism; trade unionism) brought about above all, through many decades, by social-democratic, Stalinist, Maoist and Trotskyist currents. While maintaining the study and application of Marxist concepts to the analysis of reality in the years which have followed, the group has also got involved in the strikes which have punctured the social peace in France and Belgium. MC intervened in the struggle at Air France in October 1993, in those in various factories in spring 1995 (notably Renault in Flins, and LU-Belin in Evry), and in the movement of public sector employees in France in November-December of the same year as well as in the battle against the closure of Renault-Vilvoorde in Belgium.

Our principal political objective in the present period consists of working for the constitution of organised elementary forms of the political independence of the working class. The formalisation of an initial network of organisations of this kind – products of the political radicalisation of defensive struggles – is for us the principal condition for the constitution of a proletarian political organisation. The appearance of these political committees would represent the beginning of the process of consolidation of the revolutionary consciousness of the advanced proletarian sectors. Such an organised workers' minority, forged in class combat and well accustomed to confrontation with the parties and unions of all persuasions which represent the left wing of capital, in a permanent search for workers autonomy, could have a significant impact in the process of rebirth of the independent workers' movement.

Our role in this process consists of politically and theoretically defending this perspective and, through intervention in class conflicts, contributing to the growth of the collective capacity to understand and criticise the real terms of confrontation. For this task we want to stress the importance of two major tools:

1) The concrete critique of capital and its real movement, realised by means of a rigorous but not dogmatic application of the categories elaborated by Marx and Engels in their critique of political economy.

2) The worker's enquiry as a method used to understand the thousand and one facets of exploitation in the greatest possible detail, the organic composition of the exploited class and its perception of its own condition, all at the same time. When proletarians appropriate worker's enquiry for themselves it becomes a tool of organisation and understanding.

Like any communist formation worthy of the name, MC works for its own supersession in a vast and solid centralised workers' political organisation capable of capitalising on and multiplying the destructive energies released by the class struggle. MC fights for revolutionaries to develop the maximum centralisation and political unit with the aim of putting them at the service of the formation of the proletarian party.

Today as yesterday, the final aim of any independent working class political organisation is to put to death societies which are divided into classes. This liberation can only be the ripe fruit of a long and extensive proletarian movement, fully deployed in the principal capitalist countries and capable of taking over the whole of society. The revolutionary contribution of the masses of the poor peasantry of the periphery of capitalism is also essential to the completion of this ambitious historic work. These masses of the rural dispossessed have every interest in uniting with the working class because, on their own, they will not succeed in definitively freeing themselves from the yoke of poverty which has tormented them for centuries.

Similarly, we must take account of those from sectors of society which, even if they are not directly subjected to exploitation as such, are the object of innumerable oppressions produced by the succession of modes of production founded on class division. Above all we are thinking here of women, engaged in a millennia-long fight for the destruction of male supremacy. They definitely constitute an essential social factor in the future proletarian revolution. These various components of the society of capital, and others as well (including many oppressed national and religious minorities), have an interest in common with the revolutionary workers: putting an end to profoundly unjust social relations and finishing with the archaic structures now rendered obsolete by the immense productive forces that social cooperation has created over the centuries.

Capitalism, the final stage of societies divided into classes, no longer does justice to the enormous potential human wealth contained in the society which it dominates. Yesterday as today, the state (every state) is the worst expression of the dictatorship of the possessing classes. One of its most anachronistic and painful warts, it is nevertheless one of the most essential instruments of its survival. The state (every state) must therefore be considered as the principal enemy of the independent workers' movement. The state (every state) must disappear, swept away by the stormy sea of class struggle.

Communism as a real movement is only the organised and centralised process of going beyond capital in all its forms, the movement of transition to a society without classes. As for the state, communism, in the initial phase of its existence, dismantles the state and replaces the social organisation which is a product of the state with the free association of the social forces concerned with the process of dissolution of the relations of production based on wage labour, serfdom and slavery. Finally liberated, these social forces will heighten and multiply the roads to freedom, including individual freedom. The individual will finally have the concrete possibility of being reconciled with their social nature.

But, for the moment, what is called for is maximum intransigence towards the classes represented by the existing regime and the maximum freedom and self-organisation among those who engage in the fight for a collective and individual future which is worth living. This is how we sum up our ambition and our hope. 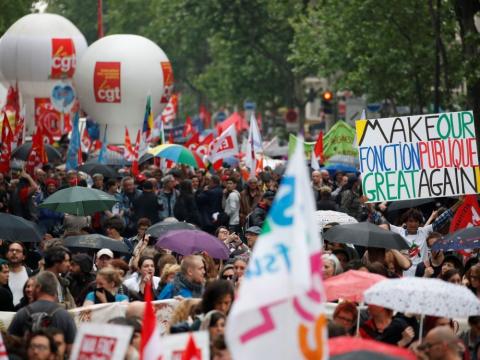 A translation of a leaflet distributed to striking rail workers in France. Produced… 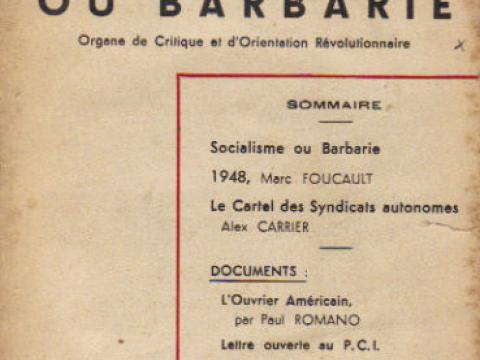 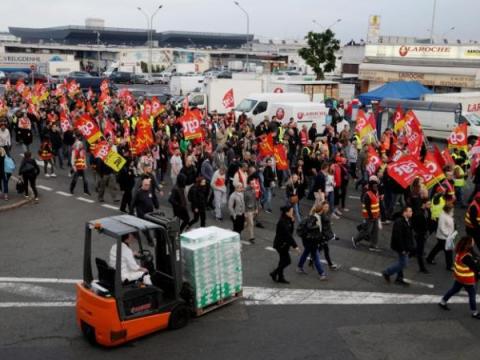