An article from Black Flag #219 on the aftermath of the Seattle anti-globalisation protests of November 30th 1999.

According to Machiavelli, the successful state requires "arms and money." November 30 in Seattle we saw the reality of both — armed police firing rubber bullets, pellets and tear gas, mobilised to protect the World Trade Organisation delegates from over 100,000 protesters.

The same scene was replayed with varying degrees of brutality in at least 20 other countries. The WTO manufactures the legal fiction which allows a global economy wherein the exploitation of labour by capital is maintained, wherein the poorest become fodder for the dreams of the richest. What underwrites the 'laws' of free trade is the use of force, a force manifest in Seattle in the mass arrests and baton charges used to enforce the curfew imposed by city mayor Paul Schell.

After the street battles of Seattle the big money players of international capital will sleep less soundly. The WTO, according to Clinton, was to be used to enforce a global standard with regard to workers’ rights and environmental protection. In the run-up to the WTO meeting the US rushed to get China into the WTO, while deliberately ignoring China's record of environmental despoliation and its habit of jailing union organisers. What was significant about November 30 was not simply that people have begun to see beyond the lies used to sell us the myths of `globalisation', but that, as we saw also on June 18, increasing numbers have moved from disgust to action. With the collapse of Stalinism we were told that we lived at the 'End of History', that, bad as things might be, they could be little better. More and more of us, though, are refusing to accept that a world in which 828 million go hungry (according to UN estimates) while the planet's 358 billionaires exceed the combined annual incomes of the countries with 45% of the world's population can be the best we can aspire to.

We have begun to make history again. From the revolt of Spartacus, through the English Civil War and the French Revolution, to the working class uprisings in Spain in 1936 and the revolts of 1968, the invasion of the `mob' onto the stage of history has been the stuff of nightmares for those who profit from the inequalities which structure our world. John Locke, one of the philosophical prophets of the Age of Enlightenment, noted fearfully that

"the labourer's share, being seldom more than a bare subsistence, never allows that body of men time or opportunity to raise their thoughts above that or struggle with the richer for theirs (as one common interest) unless when some common and great distress, uniting them in one universal ferment, makes them forget respect and emboldens them to carve to their wants with armed force; and then sometimes they break in upon the rich and sweep all in front like a deluge."

Behind the fictions of parliamentary democracy lie the arms of the state, ready to hold back those excluded from history. November 30 allowed the WTO delegates a glimpse of the return of 'universal ferment' and the rejection of what George Bush once wishfully called the 'New World Order'. Fear is never far from the thoughts of those who rule over the many on behalf of the few. Hence Jack Straw wants to revise the Prevention of Terrorism Act in the UK to criminalise any protests (from anti-fascism to anti-McDonald's to Zapatista support) which rely on the "use or threat" of violence (including violence to property) for "political" ends.

When, as in Seattle, the Lords of Capital are forced to reveal the link between "arms and money" and that beneath the veneer of consent there lies the power of arms, they are forced to reveal another truth also; that, as Spinoza observed, "the sovereign power in a state has a right over a subject only in proportion to the excess of its power over that subject" and that "the vulgus (masses) is fearsome if it is not made to fear, for liberty and servitude are not easily reconciled." There is then, no 'right' under capital, only power — and the ruling class only has 'right' over us so long as it has the power to do so.

After Seattle, then, where do we go? Do we seek more set-piece confrontations like J18 and N30? Or do we seek to challenge the power of capital on the terrain of our everyday lives? The logic of ‘globalisation' is simple — capital can roam the world seeking to exploit the cheapest labour it can find while the mass of working peoples lose their freedom of movement, their freedom to 'go'. Capital demands open borders for itself, and seals borders between nations for the rest of us. Hence, attempts to whip up panics over immigration and refugees. If we want to challenge the power of capital today, then we have to combat the 'globalisation from above' with a 'globalisation from below.' We have to support the right of 'relocation', of freedom of movement, for all working people, and seek to support the struggles of workers in whatever country they take place. The mobilisations across the globe on November 30 show what could be achieved.

In the UK, the Blair government is seeking to reintroduce 'full employment' through the replacement of welfare with poverty-wage work. In the process it seeks to criminalise those who would resist this agenda. Curfews, tagging, incarceration. Peter Mandelson set out the New Labour agenda in 1997; capital requires flexibility in the labour it seeks to exploit;

"A permanently excluded underclass actually hinders flexibility rather than enhancing it. If we are to promote flexibility we must find ways of getting people off dependency and into the labour market."

(Low wage workers hold down wages without costing the State a penny.) Under the New Labour welfare state, as the sociologists Chris Jones and Tony Novak (Poverty, Welfare & the Disciplinary State, Routledge 1999) observe, "There are now no carrots in evidence, only sticks."

The future promises both criminalisation of the poor and the hope of resistance. We should seek to support any and all struggles against the New Labour agenda — whether it be BT call centre workers going on strike, refugees calling a hunger strike or tenants fighting housing privatisation. In building such support we should seek to bring the methods of Seattle home. Bakunin once wrote that the purpose of revolutionary activity is always to seek to "break down the power of the bourgeoisie and the State and lay the ground for a new world." After Seattle, that new world has come to seem a little closer than before. 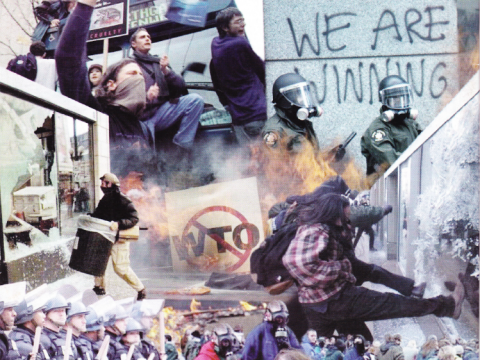 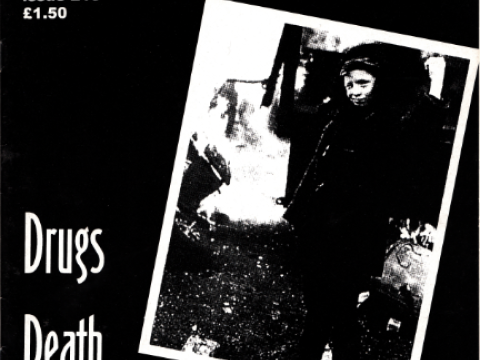 Issue of the London-based anarchist magazine Black Flag from the 1990s. Partial contents only.

An interview with journalist Nick Cohen from Black Flag #218, 1999. It is worth noting that Nick Cohen's initial scepticism about the New Labour project did not prevent him supporting the invasion of Iraq in 2003 and signing the Euston Manifesto in 2006.
Image 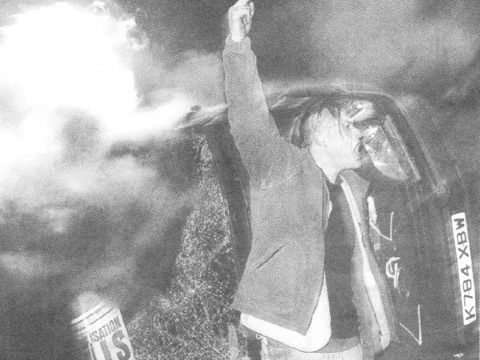 As martial law was imposed on the streets of Seattle, London hosted its own mini-riot at Euston Station. The events of November 30th 1999, from…