**This summary omits the detailed discussion of Italy, concentrating on the concepts deployed. The order of composition has not been re-arranged.[Html editor's note: this summary of Alquati was prepared by a member of the Orford Road Group in England in the early 1970s for those unable to read the original Italian. The Group was at that time in the midst of studying and interrelating both the class struggle in England and recent theoretical developments in Italian Marxism. The formatting below follows the orginal as closely as the html editor allows.]

Premise: movements of working class struggles comprise a NETWORK, not just regionally or nationally but even on the international level.

NETWORK: unity of struggles in both their vertical and Horizontal articulations

Points of connection within the NETWORK These may be strategically hierarchized, including INTERNATIONALLY. These will represent the points of advanced mass struggles of the working class!

But N.B. No simple ('mechanical') correspondence on the Vertical plane alone; that is, direct equivalence of the level of capitalist production and the avant garde of mass struggles of the class.

Thus, 1968 cycle of struggles itself transformed the network of struggles, both vertically & horizontally; thereby "recomposing the class".

Dynamic development of the 'class' through struggle in given/changing conditions of capitalist deployment of labour-power:

a) it is not and cannot be a mechanical reflection of the (now) capitalist articulation of labor-power. Even if this recomposition makes political use of the objective articulation, it dynamically transcends the static and objective differences between the technological levels and the levels of exploitation - distinct, differentiated - of living labor, i.e., of the 'working class;'

b) it is not a matter of consciousness, understood as the level of understanding or political judgment of a given worker considered as an individual belonging to one or other stratification of labor-power, or to one or another horizontal kernel of production."

May now be conceptualized as the dynamic process of circulation (communication) of struggles, their homogenization within the broad zones of capitalist production of given types of labor-power (e.g., 'European zone')

** The present phase is one of INTERNATIONAL RECOMPOSITION (both vertically and horizontally) of the 'working class.'

Hierarchy of notes of struggle as follows:-

Apex: "The Greatest concentration of FACTORY WORKERS in direct contact with their bosses, in as much as these are centers of power and command of international capital. Around them in direct relation to them, the masses of auxiliary and 'tertiary' labor-power, massified in the service of these capitalist centers of power."

Then: "... the national and regional networks." At the lowest level, the mass struggles of the PROLETARIAT in zones still struggling to attain the introduction of specifically capitalist forms of production and accumulation

"They are generally the points of maximum massification and greatest direct combination of different moments of the anti-capitalist struggle. This generally occurs in the points of greatest physical concentration of different MASSIFIED MASSES of labor-power. But no less important is the utilization (strategic importance for the working class) of the integration of the capitalist circuit so that this accumulation of information is very dense within the international network of the large intentional capitalist groups."

**At these points of concentration/massification, capable of 'utilizing' capitalist integration of circuit, will be found PROPELLING FORCES of working class struggles.

UTILIZATION OF CAPITALIST INTEGRATION OF CIRCUITS

= strategy taking account of "technical decentration and export of capital" on one hand; "economic-financial concentration and centralization" (counterpart) on the other.

Next follows a detailed analysis of Italy in terms of the above concepts - major thesis being that the specific international/national/regional network of struggles located notes of most advanced working class struggle in Italy (1968/69). One or two general and methodological points are extracted from this discussion:

a) local COMMAND/CENTER from which capital-export, but profit & policy centralized (cf. FIAT)

In 1968, first noticeable initiatives to coordinate strategy vis-a-vis these differing international circuits of capital (which of course extend outside PLANT or FACTORY to OFFICES, SERVICES, TRANSPORTS, etc.) Viz. CISL/CGIL: PCI/PCF on FIAT/CITROEN deal.

- Again, attack on mechanical 'equivalence' of most advanced nodes (or 'poles') of struggles (nationally or internationally) with highest organic composition of capital - which in Italy might be tyres & metallurgy:

"Concentration, massification are 'conditions', certainly, but do not themselves explain everything: historically, and from the standpoint of the working class, it is they themselves which have to be explained. That is, concentration, massification, integration must be seen as outcomes of the class struggle, which is then itself conducted, unified, homogenized precisely by these sectors."

Discussion now shifts to locate the 'leading forces' of struggles.

a) no objective unity/homogeneity - e.g., highly differentiated qualifications (although generally corresponding to advanced capitalist-'professional' selection/formation of type of labor-power)

b) BUT subjective unity of refusal at the global ('SOCIAL') level:

How is this possible?

- as a type of labor-power (professionally adequated in terms of the most recent capitalist development of labor power), it enjoys a necessary DISPERSAL throughout the vertical and horizontal structure of Capital.

-Hence, possibility of unification of struggles;

"Why does European capital -i.e., the circuit of accumulation of capital at its present level of global technical composition - need young labor-power?"

a) Level of automation of direct production

--scale of European production --vis. commodity and technological characteristics of dominant sectors in terms of general level of application of science to the exchange (substitution) of living labor with dead labor

b) Job also itself being directly transformed via automatic audio-visual controls of labor-process. Here also greater productivity of young labor-power.

Bosses not always able to concede even this!

"The workers termed 'technicians' are for us, above all else, the mass of new professionals demanded by the new levels of automation and mechanization of the productive circuit: these are the new professions attaching to auxiliary functions, especially to overall programming, to applied research, etc...."

(ii) Problem of 'directly' vis a vis 'indirectly' productive labor - which cannot be posed solely as a matter of the individual qualification/formation of labor-power (e.g., at school or college)

--an element of this 'qualification' always derives from the social character of labor as productive force;

--the indirectly productive labor, necessary to capital, must be analyzed in relation to:

NB However proportionally to its growing importance within reproduction process, Capital seeks to 'rationalize' even this 'indirectly' productive living labor, via electronics, chronometry, rhythmic control & parcellization etc. So illusory 'grades' (hierarchy) and 'status' are eroded by capital's own necessary reorganization of this form of living labor (indirect); and it is assimilated to the line/flow organization of directly productive labor.

* Strategically, the crucial aspect of this assimilation of different types of living labor (viz directly & indirectly productive) in struggles (in which 'technical' labor-power might, under certain condition, assume avant-garde role) is that massified labor must move first autonomously:

"nothing is more dangerous than the sophistical theories of those who posit a mechanical relation between the zone of comprehension of the circuit and the role of vanguard of the mass in struggles; in reality the contrary occurs. It is not the consciousness of the individual worker, the level of his understanding of the labor-process as a whole or of the function of consumption etc, etc. which confers the level of a movement of struggle and gives it a 'propulsive' place vis-a-vis the overall class struggle."

(iii) Location of young workers within sphere of circulation & services - similarly marked by increasing intensity of exploitation (even when the 'constant capital' substituted for living labor --changing organic composition-- is comprised of work procedures, method, paper)

"For us the 'working class' today also comprises the technicians (this was already clear for Marx...), and also even includes different sections of the 'non-productive' labor: we would place here the student movement."

* However, there is a frequent identification of 'working class' with that portion of 'direct productive' labor that Marx and Lenin termed 'factory workers'

(NB. The 'Factory' for Marx referred to the specific social relation of production organized around fixed plant/machines as its material base.)

This section of the class was the historical protagonist of the struggles around W.W.I and after:

"If Taylorism and scientific organization of labor had political objectives, it was to put in crisis the level of political organization achieved by these specific workers, the factor workers."

BUT We now confront a post-Taylor, post-rationalization situation - vis , Italy in 1960s

* The present reorganization/recomposition of sectors (aerospace, research, automation of services, containers, etc) corresponds to a new POLITICAL initiative by the collective capitalist patron to outflank the working-class internationally and for a fairly considerable length of time:

"This initiative is POLITICAL in that it aims to alter politically the composition and political terms of class relation, and so extricate itself from the crisis situation in which it has been placed by the class movements of struggle vis-a-vis wages in the preceding cycle of struggles."

THUS, these are strategic sectors of anti-capitalist struggle in the present phase.

Given this, they represent politically decisive terrain: but it is to be expected that the Factory Workers will demonstrate an increasingly PROPULSIVE role in struggles at the SOCIAL level.

Recomposition -= this dialectical unification of the class in struggle against Capital, that is the specific determined level and form of accumulation.

**The class 'adequates to' and 'uses' this given level/form of capital accumulation (including 'technological differentiation' in its anti-capitalist struggle:

"The working class utilizes in its struggle against capital its own function (global, structured, unified) as class productive of capital."

-- in post-Taylor/Ford/Keynes epoch, 'waste' and 'going slow' must be collectively organized (cannot be primitive individual 'refusal')

--Given continuous capitalist reorganization/recomposition of the interdependence of elements of a 'collective' labor-process (via time and motion work study, substitution of dead for living labor, programming of circuits), resistance itself must also be continually re-posed in ever-more collective fashion.

--This ongoing ORGANIZATION must be informal, condition of flexibility and renovation.

HEREBY RAISING THE WHOLE PROBLEM OF POLITICAL ORGANIZATION IN THE FACTORY 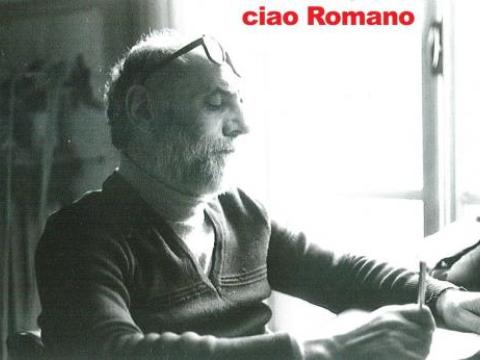 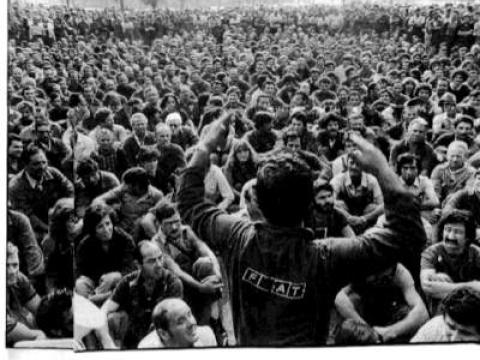 An article on Leninism and vanguardism written in 1968 for the local Potere Operaio group of Pisa. 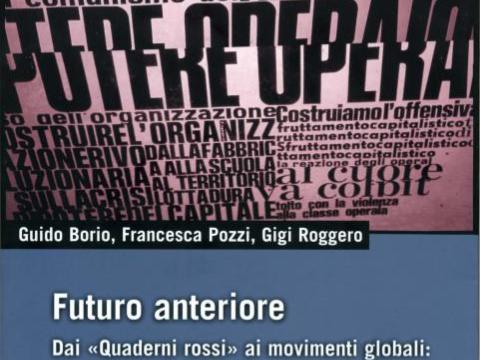 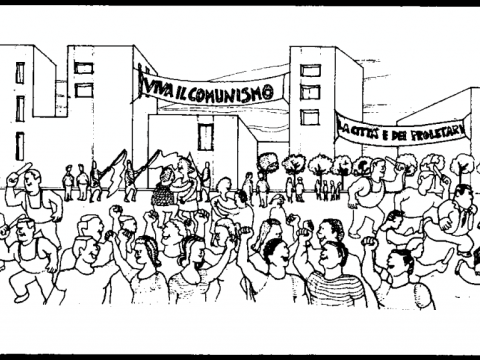