Times of crisis create hardship, but also opportunity for accelerated social change. While in the immediate aftermath of September 11th growing social movements here in the States retreated, we are now witnessing and participating in a massive antiwar movement, empowered by the successes of the anti-globalization movement. Internationally movements against American imperialism are gathering strength. Even much of the international ruling class is fed up with Bush/Blair's new more blatant unilateralism. So much for the global economy.

While we have been successful at intervening in the antiwar movement tactically in each of our cities, we have failed to put our politics out front in a developed way. In addition to this, FRAC is incredibly disorganized. Few of the tasks set out in previous conferences have been undertaken with any seriousness. Communication is pretty poor between collectives. If we have established this federation to build a more organized and dedicated anarchist presence in the Great Lakes region, we need to do some serious reflection on why things are not working. The tasks we set out in conferences should be taken seriously, not just set aside due to other priorities.

In the past 5 years we have seen the development of massive anti-globalization and anti-capitalist movements. While much of this movement is organized around some anarchist principles, it is also politically all over the place, and thus unlikely to lead to the revolutionary situation we desire without more explicit and organized anarchist forces taking on a stronger organizing role.

In both Venezuela and Argentina we have seen new powerful social movements seriously disrupt the functioning of the governments and economies. In the case of Argentina new grassroots forms of political and economic decision-making have arose, but not in any way that threatens to overcome the power of the state in the long run. In both cases the absence of a large, disciplined, organized anarchist presence has prevented turning the rebellion into a truly revolutionary movement. This is not an attempt to diss the work of anarchists or minimize the level of creative grassroots organizing. It is just to say, massive as it is in comparison with what we have here, it is still not enough.

In the U.S. post September 11th we have seen massive changes all across the board. The Bush regime has launched an incredibly rightwing campaign in all spheres of social life. The rule of law (constitutionally and internationally) has been seriously challenged with regard to the Patriot Act, the Guantanamo detention centers, the war on Iraq, etc. Even Bush's presidency is seen as illegitimate. At the same time people are seeing that the Democratic Party is no alternative. While this has left many people feeling hopeless, this is an incredible opportunity for us to organize an alternative.

Internationally the Bush regime has used September 11th as an opportunity to cash in the Cold War chips on pause since the fall of the Soviet Union. They have moved so far to the right that they are creating massive rifts in the international ruling class. Bush unilateralism in regards to the Kyoto protocol, steel tariffs, AIDS drugs for developing countries, etc. has done a lot to unravel ruling class unity, common over the last decade. Bush has solidified the compaint of much of developing world that the rules of the Global Economy are made by America, not obeyed by them.

While the post Cold War cash in goes on abroad, in the States Bush is using terror fear to create a massive backlash against all gains made over the last few decades. We have seen the rounding up of Arab and Muslim immigrants with almost no oversight. There are powerful attempts to restrict abortion rights, outlaw affirmative action, cut overtime compensation, etc. Once again the Democratic Party has been all but silent. Working people are seeing the consequences of globalization, wages dropping, unemployment rising. There is almost no one working to provide an alternative. The real question is why aren't we?

While the Bush regime has exploited fear to push their agenda forward, we have only seen the beginning. And this is something to fear. The Patriot Act has serious legal consequences that could be used to destroy the revolutionary anarchist movement. While repression is nothing new, the Patriot Act legitimates almost everything that was outlawed in response to the Cointelpro scandal. We have seen it used mostly against immigrants, but it is likely that its use against our forces is already underway. They are using some of the provisions to target the fascist Matt Hale of the Church of the Creator. They have created lists of people who are not allowed to fly, including many anti-globalization activists. It is safe to say we are not at all prepared to handle this repression.

On top of this we have the real worry of another massive terrorist incident that could initiate a massive repression campaign, with almost fascist potential. We could literally see the suspension of civil rights indefinitely with broad popular support. The Department of Homeland Security has already warned of a period of marshall law following the next terrorist incident.

It is not hard to imagine the horrible response that could follow a nuclear or biological attack. We could see the development of massive racist attacks. We could see social breakdown. It happens all over the world all the time. There is no reason to believe it can't happen here. The fault lines are there - all over the place. What are we doing to prepare a response?

While we have talked about the weakness of the Democratic Party to supply a vision of hope for working people, we have to understand our even more massive irrelevance to working people as a movement**. While we have come a long way in the last ten years, we have a long way to go before we are really even a player in shaping the outcomes of struggles around the world.

Too many lessons of anarchist history are ignored. The absence of an organized, disciplined, revolutionary anarchist presence will always keep us on the sidelines of history. The project we desire to undertake is massive. We should take it seriously or go home. A massive social crisis like that in Argentina or the former Yugoslavia could emerge at any time. Our preparation for crisis could determine a lot - from our individual survival to what the future society looks like. Small groups of organized people can have incredible impact on the shape of the future - but there are plenty of competitors who have much bleaker plans and desires than we do.

Some Suggestions for Developing a Serious Revolutionary Anarchist Presence in the Great Lakes Region:

1) All our activities should have the goal in mind of building dedicated revolutionary anarchist cadre. When evaluating one project or organizing campaign against another, this concern should weigh heavily on the decision of what we should be doing. We should have no illusions about our role in a revolutionary struggle. Revolution will be made by masses of working people, or it won't be made at all**. The flipside of this though is that without more massive agitation and organizing working people will probably choose a different path. We have to balance our faith in the self-activity of oppressed people with a healthy dose of consistent anarchist agitation.

2) We have to stop putting tactics before politics. Often we evaluate the projects we work on based on how radical the tactics are. We have not done enough to seriously develop our vision of the society we desire or our plan to get there. How do we expect people to take risks, especially people who have enough problems getting by as it is, without providing some answers to difficult questions. If we are not willing to put some serious effort into this, who do we expect to do it? Our plans don’t have to be rigid. They should constantly change as we struggle and learn. But if we don’t elaborate some solutions, in times of crisis we won’t be prepared.

One concrete project that would benefit us greatly would be a new “Introduction to Anarchism” pamphlet, written by FRAC or one of the collectives. This could be slick graphically and designed to appeal to new audiences.

3) We should continue our agitation within the antiwar/anti-globalization movement. Here in Lansing our activity has borne much fruit. People can go through radical changes really quickly. This has been true in the past with anti-fascist organizing and anti-globalization work, but I (Steve) have seen incredible changes on a weekly basis here among the people we work with. People who were trying to organize voter registration are talking about revolution, tactics are becoming more and more radical. Direct Action has made an incredible impact on the local scene. It is important that among our anti-war work we connect it to the war at home, especially concerning anti-Arab and Muslim state repression.

4) In addition to the antiwar work, we need to be doing consistent organizing work among the most oppressed sectors of the working class**, which we have almost no base within. Two examples would be OCAP and Uprise! at UPS. This kind of work may not result in immediate growth of cadre, but could drastically affect our activities in times of crisis. The networks we create with this work could be incredibly powerful – maybe not next week, but in a year, 5 years, etc. We should try to get people into key industries/social infrastructure. It is important that cadre have skills and connections in the places that we need to have control of in times of crisis. If all our cadre are working in retail, restaurants, and infoshops than it will be difficult to do meaningful organizing. I am thinking schools, water works, major factories, hospitals, distribution, etc.

5) If we want to develop cadre we have to work on it. This means developing study guides and position papers to aid in political development. We should create programs to teach organizing skills, self-defense, etc. We need to physically and economically help new collectives get started. A guide to starting a collective would be great, as well as people who can travel and help people get things started.

**Throughout this paper we have made assertions about “working people” or “the most oppressed sectors of the working class.” We want to make clear we are not talking about outdated notions about the industrial proletariat. By working people we mean it in the broadest sense. More and more people have lower and lower paying jobs, especially in the service industry, but also in a lot of the remaining manufacturing industries. By “most oppressed sectors of the working class” we mean queers, women, Blacks, Xicanos, immigrants, the “officially unemployed”, farmworkers, youth, etc. We also mean people whose work is not economically compensated, especially domestic labor /child care.

While we have no illusions about the revolutionary potential of American unions, we do think they are an essential arena for organizing. Not within the union bureaucracy – but among the rank and file. We believe that a revolution will only be successful if large segments of the most oppressed working people, as well as people in key industries join the ranks of the rebellion. If work continues as normal during the course of rebellion or insurrection – then the disruption won’t be enough.

2003 Conference report from the Federation of Revolutionary Anarchist Collectives (FRAC), a US midwest-based group that existed from 2001-2006.

Claim No Easy Victories: An Anarchist Analysis of ARA and its Contributions to the Building of a Radical Anti-Racist Movement

An analysis of Anti-Racist Action by a member of the Federation of Revolutionary Anarchist Collectives (FRAC). 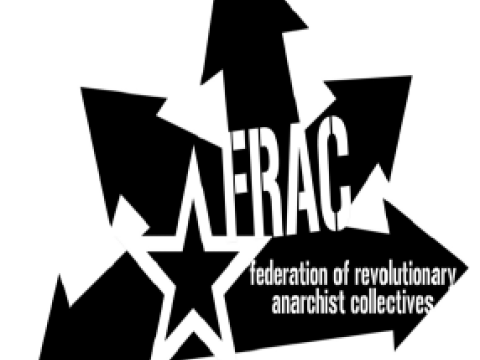 Introductory booklet for the Federation of Revolutionary Anarchist Collectives (FRAC), a US midwest-based group which existed from 2001-2006. 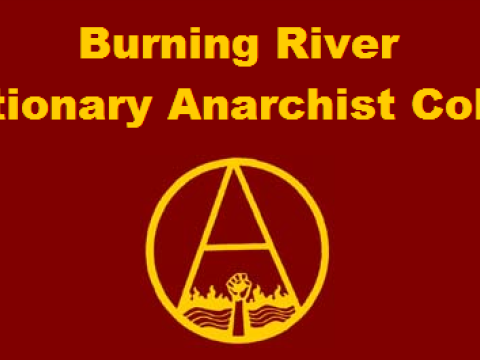 Documents from the Cleveland based Burning River Revolutionary Anarchist Collective, a group that…