For over a year strikes have continually broken out in South Africa's gold and coal mines, car industry, etc. Rent strikes have spread throughout townships and industrial suburbs. Laws on pass-control have been defied by countless illegal immigrants. Teenagers have deserted schools and set them on fire. They have attacked vehicles transporting scabs to work. Foodstores have been looted; townhalls, churches, police stations have been sacked and burnt down. Elections have been rejected and the "people's representatives" have become the target of angry mobs while informers have been terrorized when not executed. The thousands of death no longer inspire submission; every funeral of assassinated proletarians turns into a demonstration against the "peace of the tombs".

Within the course of a year South Africa has been shaken all over by this one movement that not only affected big industrial cities but also remote bantoustans, dormitory-suburbs and most of the huge mining areas. Workers' massive revolt against sacrifices has become the main axis around which struggles develop. These struggles that the bourgeoisie can no longer control are an extension as well as an advancement of the so-called Soweto-riots (savagely put down - 6000 killed - by the State in '76). Today the bourgeois security is irremediably endangered by the violent rupture of social peace.

Confronted with proletarians' rejection of their miserable conditions of life and their revolt against poverty the South African bourgeoisie has no other choice but to repress these struggles violently while at the same time calling upon people to fight for "more freedom", "more democracy", "for the freedom of press", "of association", etc. This way the bourgeoisie manages to present the proletarian struggle as a reaction to the racist attitude of the South-African State. Such polarization assumes the shape of apartheid or anti-apartheid, that are nothing else but two expressions of one and the same reality, of one and the same bourgeois alternative.

In order to take advantage of the struggles, the bourgeoisie mobilises the proletarians on the issue of "Black Consciousness", of "Black people's liberation", of anti-apartheid,...

The cohesion with which world capitalism strives to establish a regime of anti-apartheid is only being equalled by the eagerness each imperialistic constellation display to restore order and stop proletarian struggle.

While miners get surrounded by the army, while workers' living areas get patrolled by the police, the "Black" leaders of the A.N.C., of the U.D.F.,... negotiate with bosses and government representatives in order to put an end to "all that violence". Proletarian blood is being sold by these so-called revolutionary leaders. The crisis of the State in South Africa is only a symptom of the difficulties world capitalism experiences in enrolling proletarians behind measures of austerity and always worsening conditions of survival.

South Africa occupies a strategic position at the meeting point of three oceans. Its industrial power, mainly concentrated in mines and agriculture, equals that of the rest of the African continent. It is the first producer of precious ores and a pole of the world market where capital has been concentrated to an impressive extend. All these conditions have determined the development of an extremely powerful and militarized State. The stability of world capitalism has imposed a state of apartheid in South Africa (it is not by accident that this racist State was accepted as a constitutional regime just after the war in 1948) as the only way - thanks to social peace that this way was achieved at little expense - of facing the strategic battles that continually opposed imperialist powers. Anyway, the Allied forces have never been embarrassed to help create a "racial state)" - what they all are - and other concentration camps after having "freed the world from barbarity" (sic).

If capital backs apartheid or fascist regimes, it is mainly because such regimes allow for a more important valorization (cheaper workforce): this is its major care. At the same time capital never stops trying to show its purity by defending the "world community of democratic interests" (an ideology aimed at cementing the whole of society in order to prevent a real understanding of our class interests). In fact, in South Africa capital's interests are double: on the one hand capital requires an unceasing increase in surplus value and on the other hand it must imperatively move towards a State of anti-apartheid to try to restore law and order amongst proletarians. This brings about dissensions between the various bourgeois fractions in the world.

Counter-revolution takes the shape of polarization not only as a cover for the struggles between fractional interests that shake world capitalism but also and in the first place as a means to stop the more and more threatening waves of proletarian struggles. This polarization is based on always the same obstacles continually faced by proletarians: racism, forced immigration, police control, discriminations, persecutions,... When fighting against pass-control, against deportations to the home-lands, against confinement in town-ships, real concentration camps, or when squatting living places that are forbidden for black people, the proletariat fights against the social misery of this rotten society. Today's struggles are not engendered by the need for "Black liberation" nor by racial antagonism but by the need for liberation from the links that enchain proletarians to the mercy of capital's needs.

The fact that these struggles get a strong echo amongst clandestine immigrants, unemployed and even amongst young whites, illustrates the force of the movement which, instead of being limited to factories, has touched all categories of proletarians and all places of capital reproduction, expressing the general willingness of the proletariat movement to refuse all separations and to keep united in spite of the anti-apartheid movement that tries to hide this reality and to break it down. By claiming the "law of the majority", universal suffrage, the anti-apartheid leaders invite proletarians to give up social struggle and to join them in the "paradise" of democratic rights (for more details on this subject see "Against the myth of democratic rights and liberties", Communism n?1). With their universal suffrage they try to impose black nationalism claiming for a government by African! They use all the power of their organizations, supported by different world capitalist fractions, to try to restrain revolutionary agitation (that attacks all defenders of order, black and white) and to lock it up in the prisons of African nationalism!

The A.N.C. and U.D.F. militants, the union leaders, the Nobel prize of social peace,... they all display their terrorist arsenal against "refractory" proletarians and other "provokers" who threaten the peaceful development of the negotiations for conciliation, for "opening" towards the government and the bosses representatives.

Trade-unions may state their regrets about the outcome of the miners' strike at the end of last August at a time when they actively prepared together with the government the army's demonstration of intimidation against strikers as the only "glorious" outcome possible to make proletarians accept the successive refusals of their claims -amongst which some concerned a rise in wages judged "unrealistic" by the unions as well as the re-engagement of proletarians sacked because of their sabotage actions anti-scab violence-. The anti-white radicalism of certain A.N.C. branches such like the P.A.C., as well as the democretinism of trade-unions and pacifists, is just another way of sabotaging the rising class-movement by trying to link proletarians to a patriotic army, organ of promotion for imperialistic war and massacres (bourgeois attempt to get rid of class contradictions). The pious calls for justice and for "black people's right" (approved by all right-thinking humanitarians) express the pacifist ideology, the violence and the "whites" terror with which the South African bourgeoisie represses the revolutionary vanguard minorities and tries to counter the extension and the organization of different struggle practices that constitute the only alternative for the proletariat.

Apartheid and anti-apartheid both reinforce the South African bourgeoisie; they bring about divisions, isolation and weakening amongst the worlds proletariat.

In order to be able to grant to the South African state the help of international capitalism, the bourgeoisie with its press, its lawyers, its churches of all religions, its many friends of man and earth, accomplishes its dirty job of turning proletarians away from the struggles of their class brothers: this is the only way for the bourgeoisie to stop the revolutionary blaze that is threatening them.

The corollary of this polarization is the organization and social function not only of anti-apartheid campaigns but also of pacifism itself with such masquerades as the "Band Aid" that only serve the purpose of concealing our real class interests so as to strengthen social peace. The anti-apartheid campaigns make the proletariat all over the world believe that those "poor blacks" just have to fight against one "type of regime" and not against world capital.

By presenting these social struggles as specific to Africans, the world state manages to prevent all real class solidarity from coming up and all proletarian internationalism to develop. The proletariat, struggling for its own interests and against austerity, rejects all national solidarity and all cross-class unity. In South Africa, through their hard and violent struggles proletarians try to break the nationalist frontiers. Even though their movement is still marked by weakness mainly due to their isolation, they sabotage the national economy and attack law and order for the sake of their own class interests. To the boycott of elections by anti-apartheid reformists, proletarians have answered by sabotaging the electoral truce and by direct action against the state. With its strikes and never ending riots the proletariat hasn't tried to "overthrow a government" but has shaken the social domination of capital and has denied all bourgeois fractions the capacity of ruling. To the violent police interventions and to the pacific "framing" of the movement by unions and churches, the proletariat has answered with the vital necessity of revolutionary violence to protect the workers' demonstrations from repression, to counter the action of scabs and informers and to prevent mass lock-out and dismissals (1700 miners are threatened with sacking for having been on strike; others have been dismissed for sabotage actions).

Our comrades' struggle in South Africa aims at destroying the frontiers, ideologies, racism,... that are continually used by the state in order to separate us. Their struggles show our common class interests as opposed to sacrifices and austerity. It is our duty to develop here the only real solidarity with this struggle: the merciless fight against austerity, against misery and against social peace. In other words, let's fight here and everywhere for the same interests as those for which our comrades in South Africa attack the world capitalist state! 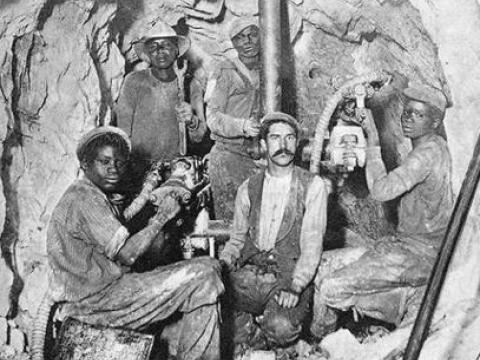 The history of four years of the revolutionary multi-racial union in South Africa, the Industrial…
Image