The struggle against crisis: We can only rely on ourselves!

This leaflet by KPK contains also a sketch of balance of power between proletariat and capital in Czech both now and during years before the crisis. It was distributed at unionist demo in May.

The struggle against crisis:
We can only rely on ourselves!

Only a year ago, they wanted us to work Saturdays to satisfy demand – today, we're on forced vacations or sacked right away.

The crisis is here. And it reminds us that companies treat us like a rag on a stick: once they need us, once they don't – it only depends on them. But we can defend ourselves against the crisis.

Some things need to be pointed out, however:

Sure, the companies are not too happy about the crisis as it does cut into their profits. But at the same time, it suits them in a way, even though everyone including the unions, are quiet about it. In what sense did the crisis come at the right moment? Because before the crisis, during a period of economic growth, the companies were earning nice profits, but as always needed a workforce for that – and it was lacking back then. (In Spring 2009, firms needed 151 000 more workers.) And the bosses were really afraid that we might use that situation. Had we fought for better wages and conditions back then, the companies would not have been able to say: “OK, we're letting you go, there are crowds of workers looking for a job out there.” Nobody was out there.

But at the time when the balance of power was to their advantage, the workers didn't get the most of it. They relied on tame union negotiations and on the fact that bosses gave some workers a small raise to keep them working. Let's admit it: We could have gotten a lot more – not just bigger wages but, more importantly, more experience. We could have checked out what power we can use against the companies; we could have built up contacts among those of us who won't let themselves be treated like shit; we could have tested in what particular way and how effectively we can confront the bosses.

Now, as everything is getting tougher, all of that would come handy. We let the chance slip through our fingers, though. And the weaker we are now, in times of crisis. Bosses know this very well. They're waging an offensive and a real psychological war against us. Facing us, they whine about how the crisis is affecting them, but behind closed doors of their offices and in the economic press, they relish how much tamer their employees are and how much more prone they are to accept lower wages, longer commuting and worse conditions. “This is an ideal time for employers,” wrote the weekly Ekonom. They are using the crisis panic to fortify their power over us.

To concede to companies and sacrifice oneself for their good would be a road to hell. If we resign and scrimp even more, the period after the crisis will be even worse than the crisis itself. Many of the measures imposed on us by bosses (which would have been difficult to impose before the crisis), are not limited to the crisis period: fixed-duration contracts, flexibilization, faster pace at work, bossing – all that is supposed to strengthen the power over us for the future.

Unions always have regards for the bosses: “The important thing is that our demands don't damage the company!” (“Unions are more careful, take the recession into consideration and are satisfied with little”, said the Economic Chamber delightedly, and the union boss in Škoda, Povšík, confirmed that in January: “The unions cannot turn a blind eye over the recession. Our demands will therefore be smaller than the original ones.”)

Bosses never think this way. “You will be on forced vacation, we will sack you. Will it be difficult to feed the family, to pay the mortgage? Sorry, not our problem. We take care of the company interests.”

Let's follow their example: “We want better wages, higher severance pay. The company will be in trouble paying back the loan? Sorry, not our problem. We take care of our own interests.”

It's certainly hard to be that vigorous. It requires a cold head and careful consideration of what our possibilities are in a particular workplace. But to not even try and find out how strong against the bosses can we be in this or that company and how many of our co-workers would “be in”, is a sure way to defeat.

The crisis is not making things easier for us at all, but that alone doesn't have to defeat us. Even during a crisis we can tear way what we can. Even if they want to lay us or our colleagues off, or even close the plant, we don't have to cry as if defeated. It's possible to unite and fight against lay-offs or for higher severance pay.

Depends on how much we can wrest.
It's possible to occupy the factory and take the machines and products hostage. Sounds like utopia? The workers in Visteon (a company who also has plants in Czech Republic) in the UK did this recently, just as the workers in France took their managers and bosses as “prisoners”. Was that mentioned in the union press in Czech Republic?

We are many, but we need to be united.
We are on the same ship with migrant and temp workers: during a lack of workforce the employers needed them desperately. They worked in plants just like us and were the first ones to be fired. The core workforce will follow shortly – the difference in contracts will not be important anymore. We must not let ourselves be divided by prejudice and bosses.

We are many. And as the working class, we're on our own:
We can't even trust the unions, who always humbly take the economic health of companies into consideration.
They are a partner of the employers and the state, that's why they have to restrain themselves.

But our goal is not to cooperate with companies so that they survive the crisis in best condition.

Our goal is to survive the crisis as fit as we can.

We don't want look for the interests of companies, just like they don't look for ours.
And we don't trust political parties either (from the left-wing to the right-wing fascists of the Worker's Party), who only need us as a herd of voters.

Against them and against the interests of capital, we need to create our own, independent and critical, class politics.

The line is clear:
Here's US,
the workers in manufacturing plants, offices, warehouses, post offices and supermarkets --
--
and there are the BOSSES AND OWNERS.

Let's not be afraid to find and use the POWER and STRENGTH that we have against the bosses and capital they represent.

May 16th 2009, Collectively Against Capital (KPK, Czech Republic/Slovakia)
www.protikapitalu.org
please send any responses and experience from your workplace to [email][email protected][/email]

A brief presentation of a strike led by trade unions in the Czech Republic in 2008.

Workers on the government and union slide: from one defeat to another so far - Kolektivně proti kapitálu & Mouvement Communiste

An analysis of the union protests against cuts in public spending in Czech in Autumn/Winter 2010. 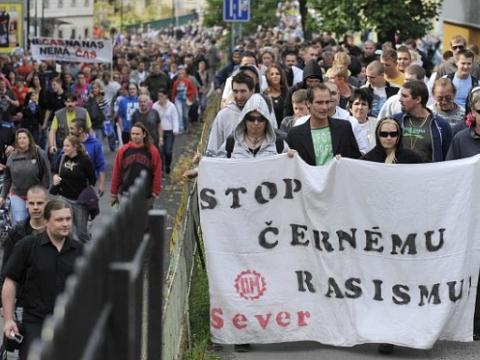 In the region of Šluknov, Czech Republic, 2011: analysis of protests “against the socially excluded” from a class perspective