Part 3 of the ongoing series by Boston IWW member Fey on Trans issues in the labour movement. Originally appeared here.

Hello again! In the last two posts in the Trans 101 series, which hopefully you’ve read (here’s part 1 and part 2 if you haven’t), some basics of trans identification were covered, along with addressing certain myths about trans communities. Now that we’ve gotten through that, we can start looking at how this all fits into the big picture of trans workers’ lives. Please bear in mind that this post will make direct reference to sexual violence, which may be triggering to some readers.

Generally speaking, a trans life is a shitty life. Even when we have support from families and friends, transphobia and cissexism still run rampant through society in general, affecting everyone from our bosses to our supposed allies in the queer community. It means we have to deal with the following issues at some absolutely egregious rates. These statistics reflect mostly US demographics except where indicated, and are probably worse in many other countries.

1. Homelessness. Approximately 20% of trans people in the US experience homelessness at some point. That is 1 out of every 5. We are routinely kicked out of our homes, we run away from abusive scenarios, we lose our jobs, and the special houses and shelters that ought to take us in still discriminate against us instead. Statistics are especially high amongst trans people of color.

2. Poverty. Trans people here are 4 times more likely to be poor than cis people, and frequently earn less than $10,000 per year. Statistics are again especially high amongst trans people of color.

3. Unemployment & workplace discrimination. At least 50% of trans people in the US have reported harassment in their workplace, and 25% have been fired (essentially, even if not explicitly, for being trans). I also do not have the exact figures but there have been studies indicating some absolutely abysmal percentages of openly/visibly trans people who get hired versus “stealth” trans people or cis people. There is barely any labor law that defends us against all of these issues. We have been hoping that something like the Employment Non-Discrimination Act could finally pass in Congress and give us some nominal legal protection, but most “LGBT” rights groups and even gay Congress members have largely concerned themselves with “marriage equality” advocacy (which still does nothing to provide monetary assistance to unmarried people in need) or repealing things like Don’t Ask Don’t Tell (the repeal of which now allows queer folk into the military, but not trans people, and in the meantime, the last thing we really need is a new way for trans people to get killed). Meanwhile, even if ENDA does get passed someday, it’s only legal protection— not union protection. And just to reiterate, our unemployment problems are highest amongst people of color.

4. Unsafe sex work. This is primarily an issue for trans women (again, especially women of color) but not exclusively, and in any case, what many women and others in our communities have to deal with… is simply terrifying, devastating, and sickening. As many know, sex work is already very dangerous simply because of what it is. It becomes all the worse when the near-impossibility of ever having “safer” work in someone’s life will push them to perform riskier acts for absurdly low prices, when pimps have even more avenues of exploitation, and when someone’s dual societal status as a fetish and an abomination mean johns have a high likelihood of killing them after services are rendered— whether or not he knew he was buying sex from a trans person in the first place.

5. Domestic violence. 80% of trans people in Scotland have reported abuse from their current partner or their ex(es). Statistics are no doubt similar over here. That is 4 out of 5 people. I myself am a survivor of emotional & sexual abuse from a now-ex. These figures are so astronomically above the average that it should easily be nauseating to consider.

6. Rape and murder. Worldwide in the last 4 years, there have been 800 reported murders of trans people. Who knows how many unreported ones there have been. Even assuming “only” 800, that means that pretty much every 2 days since 2008, a trans person has been killed somewhere. These murders are frequently brutal to a degree that normally is only witnessed with serial killers— dismemberments, mutilation, burning, sexual violence. The trans body appears to “provoke” some of the most sickening responses from cis people. And given these murder statistics, the rape statistics are not clear, but given the domestic violence rate, I personally prefer to assume that if 50-60% of trans people worldwide are rape survivors or will be at some point, this figure might still be low. Famous murder or rape-murder cases such as that of Gwen Araujo (trans woman, beaten and strangled after sex), Angie Zapata (trans woman, beaten to death after sex), and Brandon Teena (trans man, raped, then shot & stabbed to death) are purely the tip of the iceberg. And race is, as always, an exacerbating factor.

7. Police brutality and/or apathy. This needs no detailed explanation to Wobblies.

8. Suicide. Studies indicate that approximately 40% of trans people in the US attempt suicide at some point in their lives, versus 1.6% of cis people. I will let this speak for itself as well.

Sources for statistics without links are from the National Center for Transgender Equality, 2011. Exception is domestic violence statistic, which is from a survey by the Scottish Transgender Alliance and LGBT Domestic Abuse Project.

The final part in Fey's series on Trans issues, originally appeared on the website of the Boston branch of the Industrial Workers of the World. 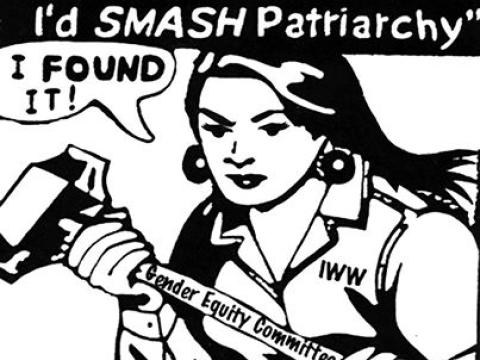