When Dominican troops crossed into Haiti's Codevi Free Trade Zone in June, it was not the first time troops had attacked Haitian factory workers there. Since the U.S. -backed coup overthrew the Haitian government in February, management at Grupo M, a Dominican-owned subcontractor for Levi Strauss, has repeatedly sicced troops of Haitian and/or Dominican origin on union sympathizers at the plant.

Jannick Etienne, a union organizer in Haiti, says that Ouanaminthe in the Codevi Free Trade Zone (FTZ) is at once remote from the center of Haitian political life and yet at the heart of recent events. The area is virtually cut off from the capital city of Port-au-Prince by miles of bad roads and difficult terrain. At the same time, Etienne says, Ouanaminthe is where the so-called "rebel" troops re-entered Haiti in February before the recent coup.

These "rebels" are actually a U.S. -funded proxy army, like the contras of Nicaragua, and many of them are veterans of earlier U.S.-supported coups and bloody repressions dating back to the father-and-son Duvalier dictatorships (1956-1987). A number of them had been in exile in the Dominican Republic following murder charges against their leaders related to the previous coup in 1991. These returning fugitives also freed others from prison as they swept through the Haitian countryside toward the capital.

Within two days of the 2004 coup, Grupo M workers demonstrating at the plant saw "rebel" Haitian troops roll into town. When the soldiers arrived in Ouanaminthe on March 2, they immediately beat, threatened, and handcuffed the workers before forcing most of them back to work (with the exception of 34 unionists who had already been fired). The workers had been protesting the illegal firing of these 34 employees for union activity, when management called the "rebels" to town.

International solidarity groups helped force a partial settlement with the workers over the next month or so, but management continued to harass the workers. Now, after being beaten, kidnapped, threatened, and forced to accept mysterious "vaccinations," all the Grupo M workers are locked out of the plant, jobless with no unemployment benefits, as Haitian death squads roam the area. Management says they may close Grupo M. The workers say management abrogated its agreement with the workers before the ink was dry.

Working conditions in Haiti were already desperate. In a nation of approximately 8 million, the number of permanent full-time jobs in Haiti is estimated at about 100,000. At any one time, about 70 percent of the Haitian people are unemployed. Minimum wage, a cruel fiction for many Haitian workers despite the law, is said to hover around one-third of the cost of living.

Since the coup in late February, the situation has worsened. The organized violence against workers at Grupo M has very nearly become a model for workforce discipline. According to the Haitian union federation Batay Ouvriye (Workers' Struggle), factory owners and big landowners ("grandons" in Haiti) have been calling in the troops to repress agitated factory workers, sharecroppers, and farmworkers. Many others, who have not been the direct target of armed thugs, are terrified by the brutal tactics of the U.S. -supported troops, past and present.

"FRAPH [Front for Haitian Advancement and Progress] is back," proclaimed the "rebel" troops, as the elected government fell, referring to the notorious U.S. -backed death squads that had driven organized labor and other progressives underground in the 1991-1994 bloodbath. Just to show they meant business, when the troops took Port-au-Prince in February, they locked a group of ousted President Aristide's supporters in a shipping container and tipped them into the sea. The silence from their U.S. sponsors over this incident and others has been deafening.

Cheap labor has always been at the heart of U.S. -Haitian relations, ever since the Haitian Revolution in 1804. It was actually a slave rebellion, the first and still the only successful one in modern history. The U.S. sided with French colonialism as the U.S. economy was based on slavery at the time and Haiti represented the first "dangerous example."

An era of gunboat diplomacy followed, in which the richest colony in the world was militarily reduced to debt slavery. The U.S. sent ships into Haitian waters over 20 times before finally occupying the country outright from 1915-1934. By the time the U.S. Marines left Haiti, they had slaughtered 20,000 insurgents, re-written the Haitian constitution, and established Haiti as a U.S. plantation.

Successive U.S. -backed dictatorships enforced an economic subservience that, beginning in the 1960s, included foreign-owned assembly plants, or maquiladoras, that subcontract for major corporations like Disney, Target, Wal-Mart, Sears, Kohl's, GAP, and Levi Strauss. The overwhelming popularity of Haiti's first democratically elected president, Jean Bertrand Aristide, a former Catholic priest, was primarily based on his challenge to this subservience: he proposed a program of reforms that included nearly doubling the Haitian minimum wage.

This program of reform is also what earned Aristide the condemnation of U.S. business interests, the U.S. Agency for International Development (USAID), and U.S. administrations under Presidents George H. W. Bush and William J. Clinton. The Bush administration backed the 1991 coup that overthrew Aristide and the Clinton administration resisted incredible international pressure, refusing to return Aristide to Haiti until the deposed leader agreed to give up much of the reformist platform that got him elected. One of the concessions the U.S. demanded was the establishment of "free trade zones," such as the Codevi FTZ, where workers would be especially vulnerable to the ravages of corporate investors.

Help Against The Hydra

Despite the vast forces arrayed against them, the Grupo M workers are in a unique position to call on international solidarity. Levi Strauss has a Code of Conduct which requires its subcontractors to respect workers' rights, adopted as a result of the anti-sweatshop movement of the 1990s. The Grupo M factory had been built with a $2 million loan from the World Bank in 2003, conditional on respect for the workers' right to organize a union. The union rights provision was a result of an earlier campaign organized by Batay Ouvriye, with which the Grupo M unionists are affiliated.

So, when the troops started beating up workers at Grupo M, the union called on international allies to remind Levi Strauss and the World Bank of their obligations. The call went out through solidarity groups from Paris to London to New York, as well as through several multi-union websites dedicated to online activism. Thousands of supporters wrote letters to corporate offices, telephoned representatives, and passed resolutions in their local unions. When management at Grupo M finally agreed to take back the fired workers, the celebration was reportedly delirious.

But once the deal was signed and the pressure was off, Grupo M announced that the fired workers must come to a meeting in three weeks instead of returning to work right away. They sent a representative to receive the union's demands, which they already had. Then they met with Grupo M employees, but refused to include Batay Ouvriye's delegate.

Conditions in the plant during this time had also taken a turn for the worse. Supervisors threatened workers, changed work rules, and began injecting them with unspecified "vaccinations," which the workers feared were sterilizations. Nine women had miscarriages in their third trimester of pregnancy following the injections.

On June 2, when management's representative failed to show up for a planned meeting, even though he was seen in the building, the workers voted to strike. The next morning, every Grupo M worker walked off the job. Management was sputtering, demanding to meet with union representatives of its own choosing (a violation of Haitian law), insisting on a list of union members (also illegal), and finally threatening to close the plant.

During the strike, plant managers also summoned four women inside, where armed Dominican guards stripped them of their work shirts and badges and questioned them. When the strikers outside began clamoring for their release, the women were allowed to clothe themselves, but soon a truckload of Dominican soldiers pulled up and aimed their weapons at the workers. Workers say these guards also beat a woman who was four months pregnant and threw her into a mud puddle.

The walkout continued until June 8, when management agreed to negotiate with the union and the workers agreed to return to work. However, when the workers arrived at the plant the next morning at 5:30 AM, they discovered that Grupo M had locked them out.

Yet the workers have not given up. They continue to demonstrate and to appeal to the Haitian Ministry of Labor. Batay Ouvriye has called on "all workers and progressives" to unite against the "international multicorporate world of today." At present the workers are asking supporters from around the world to demand action from Levi Strauss and the World Bank (www.haitisupport.gn.apc.org).

"We would like to encourage the people in the United States to remain concerned about what is happening in Haiti," says Jannick

Etienne, "not to be taken in neither by mainstream media, nor by other media's placing specific political interest above what is happening to the popular masses on a daily basis. We hope they will continue to follow the events, take contact with us and fight with us as they can for our common interests."

Ricky Baldwin is a labor and anti-war activist who writes frequently for Z Magazine, Dollars & Sense, and Labor Notes. 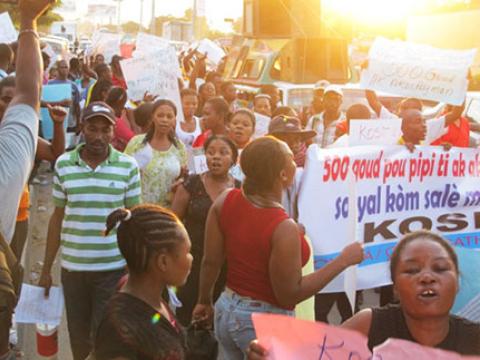 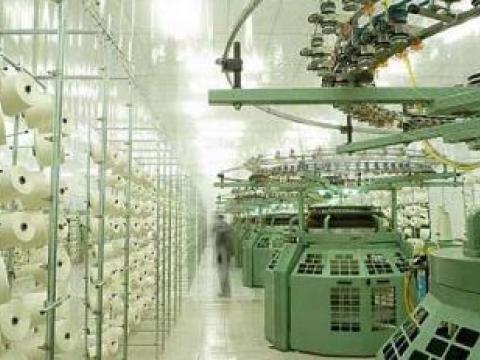 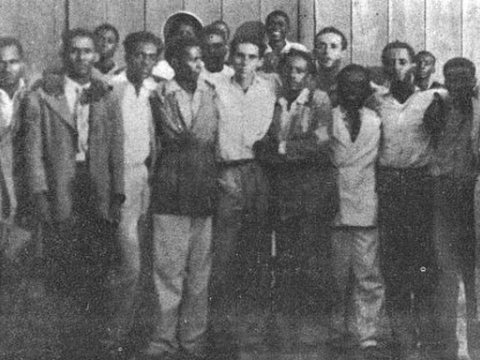 In 1946 a group of Marxist students opposed to the Dictatorship of Elie Lescot, started a student movement that grew into a general strike…