The Korean Confederation of Trade Unions began a full nationwide strike at 1 p.m., protesting parliament’s approval of the non-regular workers bill that unionists claim will increase the number of temporary laborers.

It said that a total of 150,000 unionists at over 150 workplaces, including 40,000 workers at Hyundai/Kia Motors, took part in strikes across the country.

The union, which represents more than 800,000 workers in various industrial sectors, also staged a massive outdoor rally yesterday in front of the Assembly.

KCTU president Cho Joon-ho said in a news conference that "The ruling and main opposition parties unilaterally passed the bill and disregarded worsening plights of non-regular workers. We will continue to strike indefinitely until the Assembly withdraws the bill,’’.

Rail and subway workers will also strike today to demand better working conditions and employment rights. 70% of train and subway services are expected to stop as a result of the strike.

The Korean Railway Workers' Union and the Seoul Metro Workers' Union have decided to take collective action today, despite the government warning that it would refer the looming strike to compulsory arbitration. Striking workers would be forced to return to work and be banned from striking for 15 days if the Labor Minister invokes emergency arbitration powers.
Meanwhile, unionized workers of Korea Railroad (Korail) have been on a partial walkout since last Tuesday. They are asking the company to scrap its restructuring plan to reduce its workforce, reinstate some 70 laid-off workers and stop discriminating against non-regular workers.

The company and government have come out with measures to cope with the expected traffic disruption.

About 661 non-unionized workers of Korail and soldiers will be mobilized as scab labour to operate trains, while the government will ease restriction on operations of buses and taxis to make other forms of public transportation more available to the public.

It also said a special situation room to monitor the strike and coordinate measures to reduce its effects has been established. The control center will receive information from across the country and from Korea Railroad Corp. 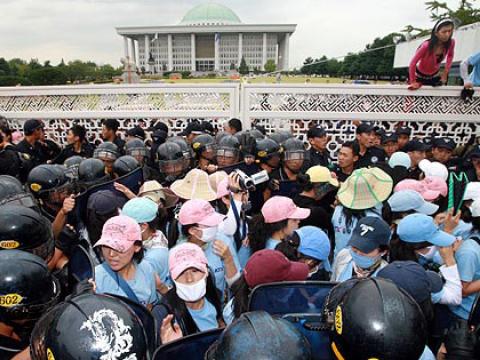 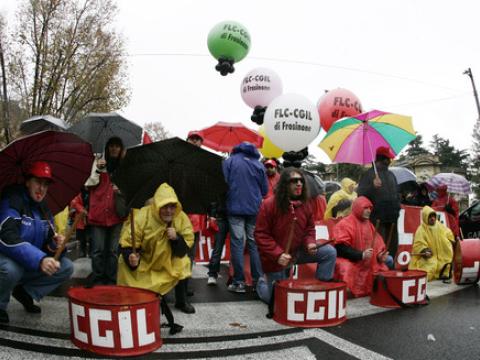 231 railway workers were arrested and 2,244 workers were suspended during the third day of a mass strike in South Korea.