Explaining why letters had been hand-delivered to four representatives of the Communication Workers' Union (CWU) threatening them with legal action, the spokeswoman declared: "Letters were sent... to say... that there is no clear evidence showing a real will to get people back to work and a number of options are being considered, including taking injunctions out against them personally."

Not only were the union representatives being required to dissociate themselves from the strike, the four were being told they'd be held personally responsible for the stoppage and might be pursued through the courts for Royal Mail's losses if they failed to "get people back to work".

Royal Mail didn't actually demand that CWU officials use whips to herd postal workers in penitential procession through Belfast city centre and back into Tomb Street. But give them time. Why stop now when they've got away with so much?

Yesterday morning, one BBC presenter, having completed an interview in which the commercial boss of Royal Mail was allowed, unchallenged, to deliver a propaganda barrage against the postal workers, signed off by gratuitously reminding listeners that the strike was "illegal".

But it is not illegal, if we are to give the word its normal meaning. The strikers are not breaking the law.

It is true - presumably the point the BBC presenter was making - that they haven't jumped through the hoops designed by the Thatcher Government to neuter the trade union movement and left in place by New Labour and so cannot invoke the protection of the law.

It's understandable that Royal Mail management should take every opportunity to dub the stoppage "illegal." But journalists ought not to substitute management-speak for facts.

The startling one-sidedness of coverage derives mainly from the fact that union officials have themselves been advised by lawyers that they mustn't appear to express support for the stoppage lest they leave the union open to legal action.

As a result, news organisations achieve "balance" by giving management free rein and then providing space for a union spokesperson to stress that the union is urging its members to abandon the action to which management objects.

There is no direct expression of the viewpoint of the hundreds of workers who felt they had no option but to walk off the job.

Much was made of a Royal Mail suggestion that the strike was sparked when a worker from the Shankill was discovered noting the personal details, including the car registration number, of a manager.

These reports were set alongside quotes from a letter issued by a representative of a union [the GMB - libcom] involved in a battle for members with the CWU. The letter described the stoppage as "deeply sinister".

Taken together, the implication of these reports was that a Royal Mail manager had been targeted for attack and that there had been paramilitary involvement in this targeting.

There is no truth in this. None whatsoever. But the untruthful suggestion has been seriously damaging to the strikers' cause.

Those who reported the suggestion as if it had substance might now feel it appropriate to check the story. The diary is available for inspection.

Royal Mail management isn't alone in Northern Ireland in believing that citizens must abandon all expectation of dignity the minute they walk into work.

Thatcher's spoilt children, adopted and doted on by New Labour, acquire a half ounce of authority and dream of Mussolini.

The tendency is particularly marked in parts of the public sector being pared down and pummelled into shape for flogging off to private interests.

Thatcher's attitude to working class people who dared to stand up for themselves was most clearly expressed in her mobilisation of the propaganda and repressive resources of the State to defeat the miners in 1984-85.

The NUM was pursued for its assets, nationally and internationally. But, as far as I remember, the Tory Government never went so far as to deploy people with corkscrew souls under cover of darkness to deliver letters implicitly threatening to seize the possessions of individual union members.

But that happened in Belfast last Thursday evening.

What are we coming to? Are people to be left homeless because they refuse to allow themselves and their fellow workers to be treated like dirt?

How strange that this should happen, and scarcely a dicky-bird about it, in an area where political leaders never give over about defending their communities' rights.

Incidentally, Hugh Smyth (PUP) and Michael Ferguson (SF) both made the point at Lanark Way on Tuesday that this had been the first time since 1932 that the Shankill and the Falls had come onto the streets together to make common cause.

You'd think every advocate of reconciliation etc. would be out cheering.

But too many would rather have the workers settle down separately than rise up together.

Personally, I take the opposite view.

Union officials are trying to thrash out a new deal to end the strike - but workers are holding out until they are guaranteed no victimisation.

A march and rally is being built for Tuesday 14th of February in support of the striking posties and to demand 'Dignity And Fair Treatment In the Workplace'.
Image 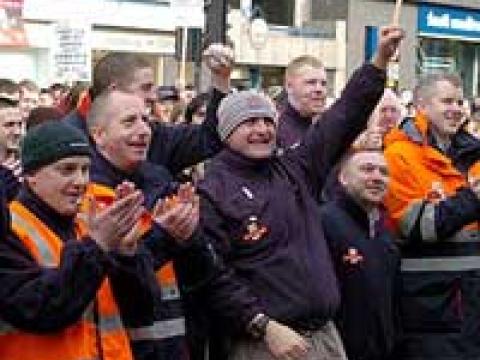 Belfast post wildcat strikers win for all of us

At a packed meeting at lunchtime on Friday 17th February, in Transport House, Belfast, striking postal workers decided to end their wildcat…