Workers are making a series of demands, many related to reforms of the antiquated civil service statutes, many of which haven't changed since 1958, shortly after independence.

Workers are seeking to improve upon the guaranteed annual increase of 2% won in April last year and are now looking for inflation-based pay increases. They are also demanding the institution of a minimum salary, improved health benefits as well as reforms to the pension system to make benefits more uniform and to increase them for recipients and their dependants.

Other demands include: increasing the quota of internal promotions to 33% and to institute it retroactively for the last 6 years with a special round of promotions; allowing all workers to take professional exams after 4 years of service; revised status for administrators, engineers, doctors, teachers, nurses and all other categories of state workers; creation of a salary grade for primary teachers and nurses; and a reform to the taxation system, including making those on the lowest salaries exempt from taxes

The independent public service doctors' union (SIMSP) has had 35 of its members on strike on a rotating basis since the fifth of February. The union has chosen to rotate 35 striking personnel to maintain patient care but there is a risk that they will extend the action. The union ordered the strike over the grading of medical doctors and several other demands, the government has so far refused to negotiate with the SIMSP as it is 'unrepresentative' in spite of the fact that it is the largest union in the sector representing 50% of doctors.

The workers are also protesting at violations of employment law, specifically over dismissals. The unions claim that 150,000 local government workers are living in poverty.

In other news, Moroccan fishermen ended a 20-day strike today after winning concessions from the government. The government agreed to continue to except them from paying VAT on fuel and to lower the price of fuel sold to fishermen. The government also agreed to devise and implement a strategy that should lead to the creation of 65,000 new jobs in the industry, the doubling of exports and a 33% increase in domestic consumption. 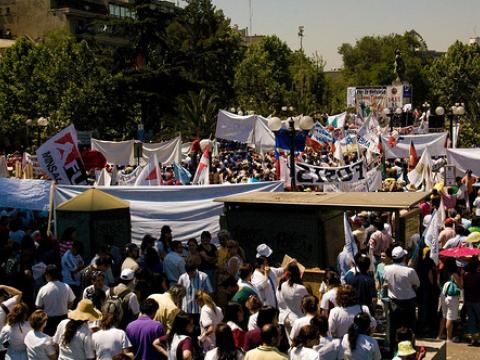 Chile's Senate unanimously approved a 10% wage increase for public workers on Thursday, ending a strike by 400,000 state employees that had…
Image