Pinilla, is escorted to a Senate hearing to answer charges of misconduct.

A series of protest demonstration and a General Strike led to the downfall of the Dictator Gustavo Rojas Pinilla and the restoration of free elections. Unfortunately this left Colombia still in the hands of the Oligarchy

The strikes and demonstrations that deposed President Gustavo Rojas Pinilla of Colombia were planned somewhat day to day and began as reactionary actions in response to Rojas’s attempts to hold power indefinitely. The opposition to Rojas had a wide base, across social classes and political party lines, and varied spokesmen, from students to political leaders to the hierarchy of the Roman Catholic Church. This was a result of the growing discontentment with the direction of the Rojas regime.

When Rojas came to power in 1953 he had deposed another dictator and carried the promise of ending civil war in Colombia and resolving political conflict between the two political parties, the Liberals and the Conservatives. While both parties mainly represented only the wealthiest 5 percent of the population, who held most of the power, the conflict between the two was the source of much of the violence in Colombia. Both parties were behind Rojas as he came to power as a savior for the country.

After serving out the former president’s term, he convinced the National Constituent Assembly to suspend the constitution and elect him for another term to last until 1958. Over the next four years Rojas’ popularity dwindled as he began to censor the press and enriched himself and those close to him at the expense of the national economy. By 1957, despite the rising price of coffee (Colombia’s main export), Colombia’s foreign debt had risen to $350,000,000. Meanwhile, Rojas was also dropping bombs and napalm on his own country in an attempt to fight guerrillas. He was not close to establishing the peace that he had promised in 1953.

As he prepared the way for re-election in 1957, Rojas began arresting opposition groups, killing protestors, and organizing a government-run third party. He set up bills that would suspend universal suffrage, allow him to rule for another term, and enlarge the National Assembly to secure his re-election. Already, the leader of his secret police was in favor of the growing base of opposition. Despite a ban on anti-regime meetings, a Catholic Archbishop met with opposition leaders and pledged the support of the Roman Catholic Church. The Liberal and Conservative parties united in a Civic Front and put forth a single presidential candidate, Guillermo Valencia, in April 1957. This was mainly a protest action, since Rojas’ puppet assembly would not elect Valencia.

On April 25, 1957, Rojas sent his bills to the Assembly, which was to re-elect him on May 1. The day before the election, a Catholic Cardinal wrote a letter to Rojas condemning his continued rule as illegal.

On May 1, Rojas ordered the arrest of Valencia, who was campaigning in Cali. Troops surrounded the house in which Valencia was staying and placed him under house arrest. Outraged, university students in Cali declared a strike in protest of the arrest. The student leaders were headquartered in a Catholic Church, where they had the support of the clergy. Due to the unrest, Rojas postponed the election.

The next day student strikers and some other protesters surrounded the soldiers holding Valencia and pestered them. Students in Bogotá and other major cities declared a strike as well. In Bogotá, the students called for Rojas’ resignation and destroyed portraits of the president in the National University. They also held a march through the city. Police attacked student strikers and demonstrators with tear gas and jets of red-colored water. That day, a Cardinal called President Rojas and told him to release Valencia. The president lifted the house arrest.

Rojas had scheduled a pro-regime demonstration for May 4 and prohibited newspapers from publishing a Cardinal’s letter against the planned action. The day before the demonstration, Police used tear gas on Cali women as they held a protest march against the censorship.

Students in Bogotá and Cali began to set up strike councils in schools to organize the campaign. Through these councils they were able to spread glass and nails in the streets to stop police cars, begin fundraising, and make fliers and stickers with the words “Death to Rojas” to hand out to other citizens.

On May 4, Rojas sent 35,000 soldiers to Bogotá to combat the revolution. Despite this occupation, numbers of soldiers were already beginning to show support for the opposition and did not follow all orders. The University Central Committee, which had taken control of the student strike, began distributing fliers and holding meetings with labor leaders to organize a general strike. Valencia also helped to lead the call for a general strike that would encompass the entire country.

The next day was Sunday. At a Catholic Mass in Bogotá, the presiding priest gave a speech against Rojas’s regime before an overflowing church. The churchgoers began to sing the national anthem and marched out of the church shouting, “Christ, yes – Rojas, no!” Police used their tear gas and jets of red water against the churchgoers. In continued demonstrations later that day, police killed two students.

Workers began a general strike on May 7. Economic activity throughout the nation ground to a halt as shopkeepers closed their stores, factory laborers stopped work, and banks closed. In cities’ streets strikers clashed with soldiers when strikers began to throw rocks at the troops. The military killed fifty demonstrators throughout the country in such confrontations. Rojas threatened to arrest all participants in the strike and drafted the striking bank workers into the army.

Despite letters from citizens throughout Colombia demanding free elections, the Assembly met on May 8 and elected Rojas for another four-year term as president. Rojas organized a celebration march in Bogotá with only 800 followers.

The next day papers published a letter from a Cardinal denouncing the regime. An archbishop in Cali threatened to excommunicate the people responsible for killing demonstrators during the strikes.

Military leaders held a meeting and agreed that Rojas had to be deposed. The president had lost the support of the military on which he had relied so heavily. The military leaders also met with conservative leaders to organize against Rojas. As student and worker strikes continued throughout the country, the Civic Front, the union between the Liberal and Conservative parties, ordered Rojas to step down. The president asked them to let him serve out the current term. The Civic Front would not accept this compromise.

On May 10, a three-man military junta convinced Rojas to step down in the early hours of the morning. The president knew he could not keep power or order in Colombia without the support of the military. The junta took over the government with the backing of the Liberal and Conservative parties and the striking citizens. People in cities throughout the nation filled the streets in celebration, chanting, “He fell!” and flying the Colombian flag.

The new ruling junta held free elections for the National Constituent Assembly and Presidency a year later to restore civilian rule to Colombia.

Students used broken glass and nails to stop police and army vehicles from moving freely through the streets.
The role of the military should also be addressed. Their participation and their final overthrow of Rojas was brought about by the mass actions of the citizens. Even during the government takeover, the threat against Rojas was not one of direct violence. The threat was Rojas’s inability to hold power and keep order without the support of his military. 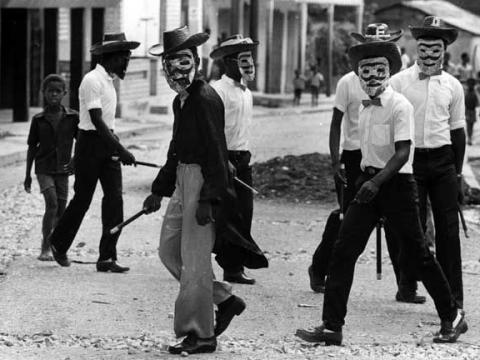 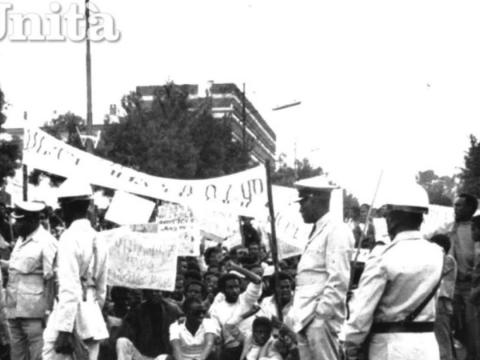 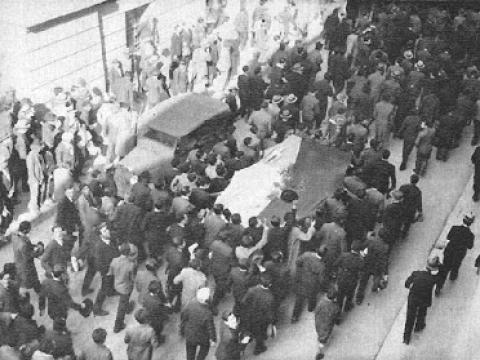 In 1989 students, teachers and civil servants in Benin began strike actions in protest at the governments freezing of scholarships and the four month delay in wage payments in 1988. The government's stalling and repression dragged the campaign on into 1990 and escalated the conflict to the point where the regime crumbled.