A brief account of a nationwide strike of telemarketing workers in Spain to establish a collective contract in the sector.

In the Spanish telemarketing sector about 50,000 people are employed, of which 82 percent have only fixed-term contracts and/or are employed by temp agencies. The telemarketing sector comprises tele services such as emergency calls for the ambulance or information on train time-tables. Often the work contracts are limited to 15 days, only after the contract runs out will the worker know if she/he will get a new one. About 76 percent work part-time, most of them a six-day week. The average wage in the sector is said to be 750 Euros before taxes, compared to the general average of 1,430 Euros. The stats don’t tell us which working hours this average wage is based on. A phone worker who is directly employed by Telefonica gets 2,740 Euros, three times as much as their colleague in the outsourced call centre. According to an survey by the CGT union, most workers mentioned the following main problems: the fact that shifts are only announced one week in advance, the fact that the management increasingly demands multi-tasking (web-cam, fax, different phone projects etc.) and the rising numbers of redundancies due to outsourcing. In recent years the big companies, such as Telefonica, RENFE (national railways) etc., have outsourced their telephone jobs to service companies, sometimes re-located the service abroad, mainly to Morocco and Argentina.

Strike in the Sector
It’s about the establishment of a general collective contract within the telemarketing sector, which would not mean all call centre workers. If the main company belongs to the metal sector, the telephone agents are also officially metal workers. There were some strikes for the collective contract already in June 2004, but they ended without an agreement. In December 2004 the main unions CC.OO, the UGT and the (ex-) anarcho-syndicalist union CGT called for another series of one-day-walk-outs. The following are some of the official demands: higher wages, announcement of the shift schedule one month in advance, at least two days off per week, three weekends off per month, wage equality with similar jobs, no multi-tasking, reduction of temp-contracts to 30 percent of total staff, redundancy pay in case of dismissals due to outsourcing.

First Day of Strike, 7 December 2004: About 50,000 workers take part in the first day of the strike, at least according to union sources. The unions estimate the strike participation at 75 to 87 percent. The bosses talk about 27 percent and are not willing to negotiate. The unions complain that some of the outsourced companies told their workers that there was a legal obligation to provide a minimum service. This is false and the behaviour of the respective management illegal. In Andalusia some of the emergency calls are outsourced to private companies. In Seville the telemarketing sector contains, amongst others, the phone services of the following companies: national railways, regional electricity company, directory inquiries of Telefonica. Apart from Seville, Malaga is another capital city of call centres. The service company Catsa is one of the biggest in town, employing 2,000 call centre agents. On average a single work-place has to answer 450 calls per working day. Clients are mobile phone companies and other bigger corporations, for example Fnac.

Second Day of Strike, 23 December 2004: The unions say that 70 percent heeded the strike call. CC.OO and UGT complain that Telefonica and the temp agency Ranstad put pressure on the bosses’ union not to accept the contract, on which the majority of employers had already agreed. This supposedly has resulted in the fact that the strike day ended without an agreement.

Recalled Third Day of Strike, 30 December 2004: During the week before the third day of the strike the CC.OO agrees on a compromise and together with the UGT renounces the strike call. The CGT follows, but calls for two hours of company assemblies on the day concerned, in order to discuss and decide about the future of the conflict. The CGT reproaches the CC.OO with putting militant workers in a legal catch-22 situation by renouncing the official call for strike. They say that in a lot of companies the militants of the CC.OO and UGT distributed a leaflet from the union headquarters, perhaps without having read it thoughtfully, which announced that an agreement had been achieved and that the conflict was over. The leaflet doesn’t say anything about the actual content of the agreement, neither was any information published later on. The CGT claims that the main incentive for this agreement is the exemption of fourteen CC.OO/UGT officials from normal duties for their work in the collective contract commission. The main demand concerning redundancies and outsourcing hasn’t been fulfilled. The agreement also provides a loophole for the bosses to push further flexibilisation of working time: working time is laid down in the collective contract, but exceptions can be negotiated with the collective contract commission.

The CGT acts very rank-and-file orientated, calls for assemblies in order to ‘decide about the direction of the strike’. They also distributed questionnaires on problems, needs and demands of the workers. Of course, in the end they have to behave like any other union, trying to secure stable conditions in their sector: “We still have to change a lot in order to turn telemarketing into a sector of the future”. Some details on the questionnaire action: it went out to about 20,000 workers, but the CGT does not say how many were returned. The twenty questions mainly refer to the demands of the collective contract and the possible strike, they can be answered with ‘yes’ or ‘no’ and there is little space for comments. Unfortunately the conclusion mixes general stats and stats on the answered questionnaires. They claim that about 90 percent agree on the demands, that 76 percent are ready to strike, that 50 percent would go on an indefinite strike. The strike reports of the CGT don’t say anything about the actual atmosphere, discussions or dynamics in the different companies and their assemblies.

Fourth Day of Strike, 27 January 2005: On the 25th of January, the CC.OO and UGT publish an official statement accusing the employers association of treason. Their agreement, which was signed by them behind closed doors is not only not accepted by the workers (the CGT calls for more strikes), but the bosses also withdraw their signature. The main unions receive a letter from the bosses saying that they want to revise certain points, such as the redundancy payments. The strike called by the CGT alone was followed by 40-45 percent according to CGT estimations, by 1,73 percent if we believe the bosses’ declarations.

Extracts from a leaflet distributed during the strike in Malaga:

“Good evening, you are talking to a precarious worker, how can I help you?”
“We are not what we are told to say we are! We are not Movistar, Telefonica, Vodafone! We are someone else. We have to lie in order to make ends meet, in order to pay the rent or the mortgage of a house that will never be our own. Our life is not our own, but owned by the company which hired us this month. We are polyvalent workers. Today I answer your call, having a qualification in bakery, tomorrow I am the woman from Ecuador who cleans your house, or the student with a law degree, who will serve your beer. We are the contortionists of flexibilisation. We have seen the name of our company disappearing from the front of its building, re-appearing in another town, with new workers who haven’t got their own voice either, just like us. If you call us today, it will be engaged, because we will talk, on strike, and discover our voice. This time we will speak the truth.” 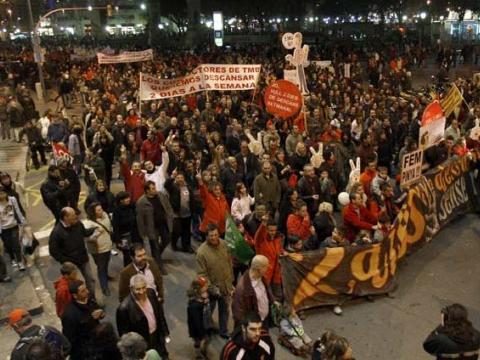 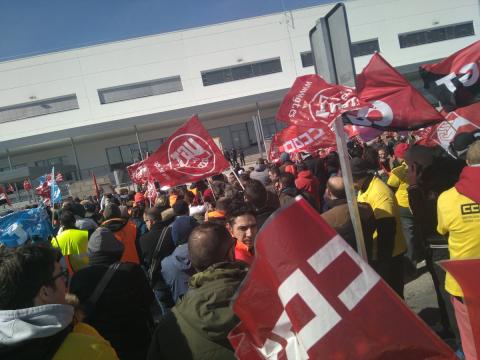 A 48-hour strike in the Amazon warehouse in San Fernando de Henares, near Madrid, concluded successfully, according to unions, with workers… 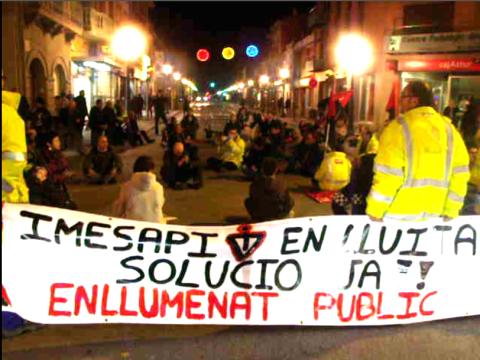 Lights in the dark: CNT and CGT members on indefinite strike against redundancies in Catalunya