Last night Nkululeko Gwala, an Abahlali baseMjondolo member, and a well known and respected housing activist, was murdered in Cato Crest. Twelve shots were fired. The style of this assassination is very similar to the assassination of Thembinkosi Qumbelo, also a well known housing activist (but not an AbM member) who was killed in the same area on the 15th of March this year. There are also strong similarities to the attack on our movement in Kennedy Road in 2009.

There has been a long struggle in Cato Crest against evictions, transit camps and rampant corruption in the housing project. Nkululeko Gwala , along with a large number of comrades from Cato Crest, participated in the Abahlali baseMjondolo UnFreedom Day event in the Kennedy Road settlement in April. In May he joined the movement. We were planning to launch the Cato Crest branch next week.

On Monday there was a road blockade in Cato Crest starting at 2:00 a.m. It was a protest against Councillor Mzimuni Ngiba for only allocating housing to members of the ruling party. Later that morning the councillor called the people to his offices to talk but when they got there he refused to come out. He said that he would only meet with a delegation of four people. Four people, including Nkululeko, were delegated to speak to the councillor. Nkululeko spoke about corruption. He questioned why houses were only going to party members and why ward committee members were receiving two or three houses. They delegation told Cllr Ngiba that they wanted to meet with the ward committee and that they would not meet with the ANC or SACP. A meeting with the ward committee and the delegation of four was set up for Tuesday at 9:00 a.m.

When the four comrades, all Abahlali baseMjondolo members, arrived at the meeting the ANC and the SACP were there. The delegation made it clear that this was not what they had agreed too and that they did not want political parties present. The ANC replied that this was ANC land and that the housing project was an ANC project and that they would make all decisions in the area and about the project. Nkululeko decided to walk out. The other three comrades remained. They were told to warn Nkululeko that the ANC would not accept what they called his ‘disrespect’. There were a lot of threats.

The three comrades who remained in the meeting reported back to the community in Cato Crest and to Abahlali baseMjondolo. The protests in the neighbouring section of Dunbar, which is in a different ward, were discussed. There are no Abahlali baseMjondolo members there but it was decided that although Dunbar is in a different ward people were struggling on the same issues and facing the same threats and that they should try to unite.

At around 9:00 p.m. on Tuesday people in Dunbar started to protest. Nkululeko and others started to move towards Dunbar from the transit camps in Cato Crest (where people have been left to rot for six years). At 11:00 p.m. Abahlali baseMjondolo received a call from one of our members there to say that people in the Dunbar community had burnt down the offices of their councillor, Zanele Ndzoyiya. He said that the people were doing their own thing and were not under the discipline of Abahlali baseMjondolo or any other organisation. The same group of people then moved to Councillor Ngibai’s office and at 2:30 a.m. that office was burnt down.

On Wednesday a Municipality car with ‘Community Participation’ written on the side drove around Cato Crest and the people were called to a meeting with a loudhailer. It was said that the agenda was to unite the community.

But when the people got to the meeting it was not about uniting the community. James Nxumalo, the mayor, and Sibongeseni Dhlomo, the ANC chairperson in Durban, chaired the meeting. The meeting was about Nkululeko. It was said by the ANC that he was vocal, that he was not disciplined, that he was disrespectful, that he was causing trouble to the party, that he was making it difficult for the ANC to operate in the area and it was claimed that he was introducing a new political party to the area (i.e. our movement which is not a political party). It was also said that anyone who interrupted the bulldozers would be ‘sorted out’. Dhlomo told Nxumalo to tell Nkululeko that he must ‘wash his feet’ and that Nxumalo must give him a lift back home to Inchanga today. It was said that he must leave Durban and return there.

Dhlomo attacked the police for not controlling the protests in the area. He has called on residents to ‘protect the area’. We all know what this means. He was calling for ANC members to drive out people organised outside of the party as the ANC did in Kennedy Road in 2009. We remember very well how Willies Mchunu said that Kennedy Road had been ‘liberated’ after our movement was driven from that area by the ANC with violence while the police did nothing. We expect more violence in Cato Crest. But just as we have taken Kennedy Road back through the strength of democratic organisation we will also hold our place in Cato Crest and across this city.

After this meeting Nkululeko contacted Abahlali baseMjondolo and set up a meeting for 8:00 a.m. this morning. The agenda was to discuss the intimidation and political corruption in the area and to organise a press conference to expose all of this to the media. Nkululeko had been collecting evidence of intimidation and political corruption for a long time.

There was a Confederation Cup game on last night. Nkululeko watched the game at a friend’s house. He was in sms and telephone contact with Abahlali baseMjondolo leaders throughout the evening. He made it clear that he expected an attack. His comrades in Cato Crest advised him to flee the area. He said that he would ‘rather take a bullet’ than run away. At 9:30 p.m. he was returning to his shack after the game. Four men accosted him and he was shot 12 times. People who saw the shooting are saying that he was killed by the same men who killed Thembinkosi Qumbelo in the same area in March. This murder was never investigated and there have been no arrests.

Now that Nkululeko is dead his body is being taken home to Inchanga. People are asking if this is what Dhlomo meant when he said that the Mayor should take him home. Just as in the case of the Qumbelo murder, and the attack on Abahlali baseMjondolo in Kennedy Road in 2009, the senior politicians arrived directly after the violence. This is exactly how the 2009 plot in Kennedy Road was organised. Just like in Kennedy Road they were singing songs against Nkululeko at this meeting. They said that they would not tolerate Nkuleleko’s ‘nonsense’ while he is 'still selling vetkoek'.

Nkululeko was always a confident man, full of smiles, jokes and songs. His favourite song was Babekuphi Lababantu Emzabalazweni?

But recently he was very quiet although he never stopped speaking out at meetings. He was saying that he knew that he was at the top of the list of people to be killed in Cato Crest and that there were many others on the list. He was asking the movement to make sure that we continued to support the struggle in Cato Crest after he was gone.
Nkululeko was 34 years old. He leaves a girlfriend, Thembi Mazibane. She is a strong comrade and highly respected. We will stand with her. We express our condolences to Thembi, Nkululeko’s family and everyone who is in rebellion in Cato Crest.

The murder of Nkululeko is the front page story on the final edition of today’s Daily News. The front page story on the earlier edition was about massive corruption in housing tenders in Durban. It said that 45 companies are under investigation. There is a direct connection between the massive corruption in housing in Durban and the repression that we are facing. The Manase Report remains hidden from the public. We continue to demand its release.

In 1993 uTata Nelson Mandela said that “If the ANC does to you what the Apartheid government did to you, then you must do to the ANC what you did to the Apartheid government.” We are being evicted by the ANC. We are being put into transit camps by the ANC. When we organise we are also being beaten, tortured, jailed and killed by the ANC. We will not give in to tyranny. We will continue to resist. Stand with us in the struggle for freedom and justice. Stand with us in the struggle for a country where everyone can organise freely and land, cities, wealth and power are shared.

The forms of blatant gangsterism that social movements face in South Africa never ceases to astound me...

This news is horrendous, love to his friends, family and comrades.

thanks for posting, solidarity.

If a government can commit the Marikana massacre, this is small change. The workers and the poor of South Africa are now paying for the domination of the movement against Apartheid by the ANC. It was always a bourgeois nationalist organisation, aimed at installing a capitalist government. Now that struggles are breaking out beyond the control of the ANC, they are acting like the thugs they always were.

Expect to see a lot more of this sort of thing until there is a conscious working class movement that can pull the rug out from under the ANC.

This is sad to know that an Abahlali baseMjondolo member, and a well known and respected housing activist, was murdered in Cato Crest. We don’t wanna see this again. 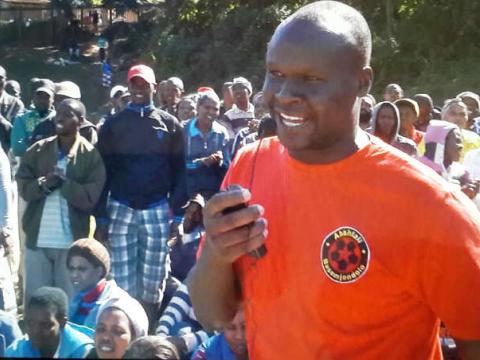 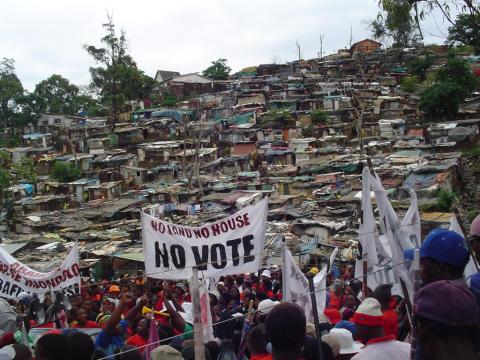 This article by Lindela Figlan, security guard, former chairperson of both the…
Image 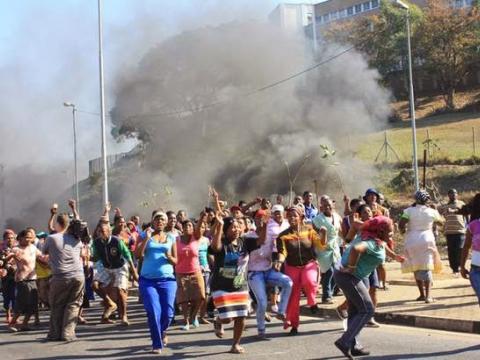