Today's ruling that every part of workfare other than the Mandatory Work Activity scheme breaks the law has given campaigners against workfare a huge boost - we were right all along. But the DWP have already said they will be doing a simple rephrase of the regulations and trying again and we need to make sure that doesn't happen by piling on the pressure now.

For people already on workfare, or who have been sanctioned because of it, this is fantastic stuff. It means people have the ability to literally just walk out of the unskilled jobs they were doing for no money and to potentially claim back much-needed money from the government.

That definite plus will make it easy to just sit back and bask about this setback for workfare. I'm still buzzing even as I write this, it's a slap in the face of the government from an unlikely source and it'll have them chasing their tails over the next few days. But in practical terms, this is not a total win. Even now they're trying to redraft something that'll wheedle around the technical language of the judges' ruling.

We can't let that happen.

As noted in Johnny Void's excellent blog workfare hasn't just stumbled today, it's been on the ropes for a while due to a campaign of direct action from groups such as SolFed, Boycott Workfare, AF, Edinburgh Coalition Against Poverty, Haringey Solidarity Group and many others which have pushed dozens of companies and charities away from using the scheme.

So we know that direct action can get the goods, and today has given us the advantage of momentum and an unassailable moral high ground.

Now is the time for us to ramp up mass direct action and bury this sucker. While they redraft their document we need to get into places and tell participants about their right to leave, bombard management and the public with the reality exposed by the case that this is bonded labour, and go after participants in the MWA until no firm in their right wants to touch that poisonous PR nightmare with a bargepole.

Ta for that, I was working mainly off the Public Interest Lawyers take on it (they were the ones handling the case):

"Over the past two years the Government has unlawfully required tens of thousands of unemployed people to work without pay and unlawfully stripped thousands more of their subsistence benefits."

So it might be a technicality, but they seem to reckon that failure means it amounts to slavery in law as well as form.

Could be wrong, but I think that's saying the Act itself doesn't breach Article 4 of the ECHR, as long as people are properly informed:

Given arrangements properly made under the Act, article 4 would not be engaged

But the applicants weren't, as covered in an earlier part of the hearing. The ruling notes:

I do not consider that ground 4 adds anything independently of grounds 2 and 3 in this case.

Which I'd interpret as saying "well we've already covered that the paperwork was a bit shit so we don't need to repeat ourselves on the article 4 thing."

So yeah I guess PIL would be overstating there, but not technically wrong, as such.

unfortunatly in my experience workfare staff have a nasty habit of selecting their words when it comes to things like this. back in october I recieved an email from my workfare advisor telling me he had found a job for me and to go down to the office. as I already do voluntery work they know I'm exempt from mandetory work placements so when I get there and have a chat with the guy about the "job" alarm bells quickly started ringing when he began using phrases such as "a few weeks of work experience with the chance of a job at the end of it"
almost straight away I was "hang on this isn't a job it's a placement" but he was insistant that they had jobs comming up as several of the workers were due to leave due to sickness. i ended up agreeing to it on the grounds that I get to take my volunteer days off for the work I'm curently doing. my first day at the placement I asked all the workers there individually about the "upcomming jobs" and they all said the same thing that there were no jobs as far as they were aware, even the manager said it was very unlikly.
another guy I know got placed on a simalar placement with the same promise of a job at the end of it (despite me warning him) not only did he get stuck on it for 6 weeks he was then given the option for an extra 6 weeks which he refused. they then told him that he has to do the extra 6 weeks.

Could be wrong, but I think that's saying the Act itself doesn't breach Article 4 of the ECHR, as long as people are properly informed:

Given arrangements properly made under the Act, article 4 would not be engaged

But the applicants weren't, as covered in an earlier part of the hearing. The ruling notes:

I do not consider that ground 4 adds anything independently of grounds 2 and 3 in this case.

Which I'd interpret as saying "well we've already covered that the paperwork was a bit shit so we don't need to repeat ourselves on the article 4 thing."

So yeah I guess PIL would be overstating there, but not technically wrong, as such.

problem is if someone is aware of their rights then it can be argued that they are properly informed and have conciously agreed to partake in the scheme even if they wern't actually informed before hand.
we all know that slavery is against the law but how many people would actually realise that doing unpaid work that is termed "work experience" or "training" is in effect slavery

Here's the text of an email I just received from Poundland:

Further to your email below, please be assured we take all matters very
seriously and would welcome you to contact our HR Director to discuss this
further. Please contact myself on 0121 526 8343 and I will be able to
arrange this for you.

“Poundland recognises the importance of offering work experience to people
looking to get back into work.

“We currently have people taking part in work experience placements across
71 of our stores, and since launching the scheme, 20% have been offered a
job with us”.

we take all matters very seriously

Have emailed them back to confirm whether the participants in their own scheme are waged or still on benefits. I suspect we know the answer to that one....

Okay I've changed it to "the law." Happy?

I can advise, we work solely with the Job Centre Plus to facilitate a voluntary Work
Experience Programme for those considering a career opportunity in retail.
As this is purely a voluntary programme supported by Job Centre Plus we do
not pay a wage but at the same time no individual has their benefits taken
away from them when attending the placements at Poundland.

Yeah, how about losing their benefits when *not* attending the placements, i.e. if they drop out? :wall:

Apparently they'll be available tomorrow at 2.30 on legislation.gov.uk 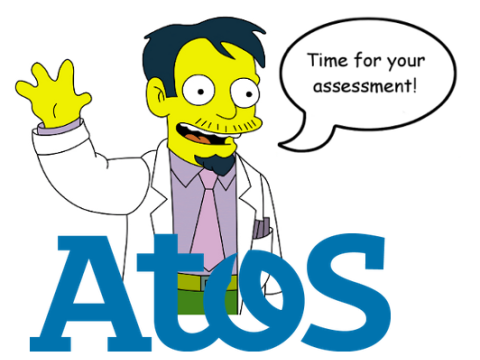 Welcome to the occupation

Published February 2012. Written for Shift's Precarity series, the Introduction to which can be read here.
Image 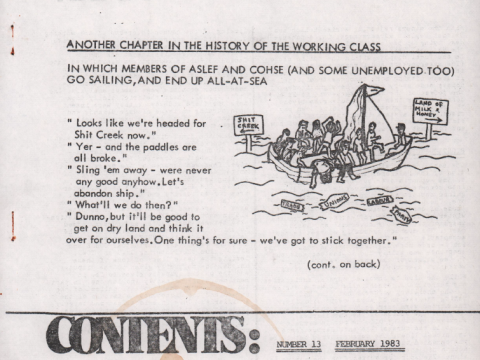 An issue of the LWG bulletin from 1983. Contents include NHS Dispute, ASLEF strike, Work or Dole?, Correspondence, Unemployed Groups, Press…