Could Osama’s death really mean the end of Afghanistan’s occupation?

“Two Bin Laden couriers were killed, as was Osama Bin Laden’s son Khalid and a woman. Two women were injured. Children were present in the compound but were not harmed. U.S. officials said that bin Laden was asked to surrender but did not. He was shot in the head and then shot again to make sure he was dead.”

News this month of Osama Bin Laden’s death sparked widespread celebration. Thousands of Americans, enthralled that the U.S.’s number one most wanted criminal had been liquidated, marked the occasion by gathering in public places and waving the American flag.

As is custom with any popular political event, both Democrats and Republicans pushed hard in the days following the raid to claim responsibility for the kill.

But Bin Laden’s death, however popular it was, is having some unintended political consequences as well – it is refocusing the American people’s attention on the longest war our country has ever fought.

Now that Bin Laden is Dead, the media is abuzz with the question: could this mean the end of the war in Afghanistan?

A Decade of Occupation

U.S. Soldiers pose in front of Bagram Theater Internment Facility
Since the initial invasion, the U.S. Government has been immersed in controversy. Critics have lambasted both the Bush and Obama administrations for the extremely high costs of the war, the ruinous impact it has had on Afghan civilians, and for a host of human rights abuses – perhaps most notably at the Bagram Theater Internment Facility, where many Afghan prisoners later found to be innocent were subjected to excruciating physical and mental strain at the hands of their American captors, and where at least two prisoners were found to be chained to a wall and beaten to death by guards.

The U.S. Government, when it has bothered to acknowledge international criticism at all, maintains that the cost Afghan civilians have paid, while high, will be more than justified given the order which will be brought by the Islamic Republic of Afghanistan – the U.S. backed central government which replaced the Taliban following the invasion.

Further, maintains Obama,“[The] war began only because our own cities and civilians were attacked by violent extremists who plotted from that distant place, and it continues only because that plotting persists to this day.”

The rationale for the invasion of Afghanistan – that it was the country from which “violent extremists… plotted” attacks on American civilians, is dubious at best.

To begin with, Afghanistan was by no means the center of either the plotting for the september 11th attacks, nor was it the permanent headquarters of al-Qaeda.

Of the thousands of militants which al-Qaeda was estimated to have had in 2001 - we had no accurate way of measuring – perhaps only as many as 1,500 were actually based in Afghanistan at the time. That number as of 2009 , estimates a senior U.S. military intelligence official, is now probably closer to 100.

FBI Director Robert Mueller conceded that even though the “idea” of the september 11th attacks likely came from leadership in Afghanistan, “investigators believe… the actual plotting was done in Germany.”

al-Qaeda has historically been a rather decentralized organization (both logistically and geographically), so much so that many government officials, intelligence analysts and academics heatedly contest the idea that we can classify it as a single organization at all.

Since its inception, in fact, the group considered to be al-Qaeda’s leadership has moved from Yemen to Somalia, Afghanistan and Pakistan. Militants associated with them have operated in over 40 countries, according to the U.S. Department of State.

Our nations gravest threat, it turns out, is a bit hard to identify, once we’ve looked a little closer.

If, as leading U.S. government officials and military leaders concede, Afghanistan was only one of many countries al-Qaeda based its operations out of, why, then, was it so important that we invade that specific country? After all, American anti-terror operations around the globe - notably in the Philipines, where comparable terrorist organizations such as Abu Sayyaf Group and Jemaah Islamiyah operate - have not taken on such dramatic proportions as those in Afghanistan.

The argument that the invasion of Afghanistan was necessary, unlike the Philipines, because the effective government of that country – the Taliban – was unwilling to cooperate, again seems dubious under scrutiny.

It is clear that the Bush administration was determined to invade the country regardless of the Taliban’s willingness to cooperate. The U.S., in fact, rejected several offers by the Taliban to turn over Osama Bin Laden in the weeks leading up to the war, despite assurances of his apprehension and being held under house arrest should the U.S. take the option of invasion off the table.

It is undeniable that part of the U. S. government’s motivation for invading Afghanistan was to disrupt the network of Islamic extremists we call al-Qaeda. Its unwillingness to engage in any sort of diplomacy with the Taliban, however, suggests that ousting them was also a major priority.

It is far more likely that the U.S. government saw the attacks on 9/11 as an excuse to exert U.S. military power in a notoriously unstable and anti-American region in order to 1. install a comparably more pro-western government and 2. use the stability of that new government to ensure favorable investment opportunities for U.S. energy businesses.

The Pressure to Compete:

In order to better compete with Russia – the country which has dominated Central Asian energy exports for years – the U.S. government has explored various ways to transport gas from the region (notably through the Trans-Caspian Gas Pipeline, which was successfully blocked by Russia and Iran on supposedly “environmental” grounds).

Given Russian and Iranian influence in the region, finding alternate routes for energy exports in central Asia has proved difficult for many western countries.

The problem could potentially be solved, however, by a U.S. based company, Unocal (now fully owned by Chevron Corporation), who co-sponsored a proposal in the late 1990′s to build a pipeline through Afghanistan, with the co-operation of the Taliban (who, the BBC reported, the company flew to California in ’97 for talks).

The bid for a pipeline in Afghanistan, however, had stiff competition.

Bridas, an independent Argentinian oil and gas company, was offering the Taliban a much more lucrative bid for the pipeline contract than was the American Unocal -”In addition to offering the Taliban a higher bid,” notes author Larry Chin, “Bridas proposed an open pipeline accessible to warlords and local users. Unocal’s pipeline was closed—for export purposes only. Bridas’ plan also did not require outside financing, while Unocal’s required a loan from the western financial institutions (the World Bank), which in turn would leave Afghanistan vulnerable to demands from western governments.”

Outmatched and outcompeted, Unocal withdrew from the competition, now choosing to classify the Taliban – whom they had treated to fabulous business vacations in the U.S. only months before - as an illegitimate government. ”[The] gas pipeline,” said a Unocal spokesperson, ”would not proceed until an internationally recognized government was in place in Afghanistan.”

The U.S. Government, under the leadership of the Bush administration, had had enough. If the Taliban weren’t going to “[Accept] our offer of a carpet of gold,” we would “bury [them] under a carpet of bombs,” as Central Asian affairs representative Christina Rocca famously told an ambassador to the Taliban.

The Taliban, unwilling to meet the expectations of either Unical or the U.S. government, would have to be substantially pressured, if not completely overthrown. To this end, the Bush administration began “supporting a one-sided resolution in the United Nations that would strengthen sanctions against foreign military aid for the Taliban but take no action against its warlord opponents,” notes Chairman of the Central Asia-Caucasus Institute, S. Frederick Starr.

It also began exploring the prospect of a limited military raid to take out Osama Bin Laden.

Before anything came of it, however, the twin towers in New York were burned to the ground, and the U.S. Government, anxious for two presidential terms to effect radical change in Afghanistan, had its excuse to enter the country.

Despite lacking the authorization to invade the country from the U.N., the U.S. government and a number of its allies invaded Afghanistan, overthrew the Taliban, and helped create a government that Unocal could recognize.

Could Osama’s Death Really Mean the end of Afghanistan’s Occupation?

President Obama is expected to call for a beginning of troop withdrawals from Afghanistan sometime this summer.

Osama Bin Laden’s death, moreover, has provided him with an excellent moral boost should he choose to make it a larger drawdown – no president, after all, wants to appear to be loosing a war, especially only a year away from re-election.

But stability and developement of Afghanistan’s infrastructure (code for business opportunities for U.S. corporations) remain elusive, leaving much yet to be accomplished for the U.S. to claim “victory” in Afghanistan.

The multibillion dollar Afghani pipeline project - a major concern of U.S. business - is likely to be safe so long as Afghani President Hamid Karzai and his government can remain in power – still a questionable bet, given that Joint Chief of Staffs chairman Mike Mullen reported to the House Armed Services Committee that he expects violence in Afghanistan to exceed last year’s.

In the end, Osama Bin Laden’s death is only a reminder of what the U.S.’s real priorities in Afghanistan are – plunder and conquest – and in no way signify any sort of serious reason to expect the U.S.’s withdrawl from the Middle East. 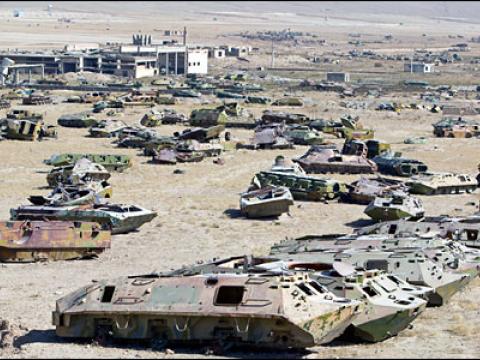 Red and Black Notes editorial, looking at the results of the aftermath of the September 11 World Trade Centre attacks and the war in Afghanistan.
Image 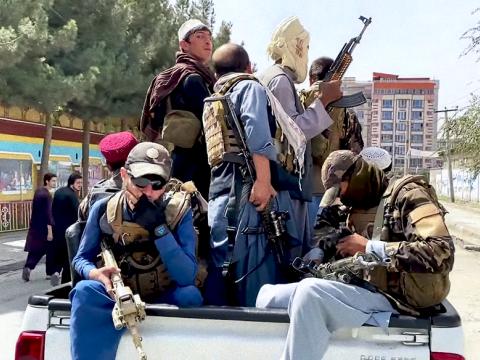 Afghanistan: The USA and its Allies Retreat

The US military were not due to completely exit the country until the end of this month, yet they have been overwhelmed by the speed of the…

The next Afghan war

As up to 5,000 more British troops are sent to fight in Afghanistan, Paul Rogers from Open Democracy examines the changing situation in the volatile country and looks at what will face the soldiers on their arrival.
Image 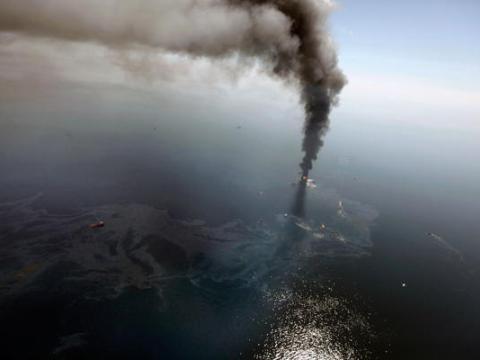 Eva Rowe’s parents were among the 15 who died that day in Texas City: “A worker who actually worked…