Since early this winter, Iceland has been facing economic crisis. People are getting angry, some of them wanting back the “good old” prosperity, while others and hopefully the majority, are realizing the real cost of capitalism.

The three major business banks have been nationalized, putting their debt on the people’s shoulders. People have been losing their lifelong savings; loans have increased and are getting sky high (and for sure they already were high enough). 200 people lost their job every single day of November and more and more people are facing the threat of losing their houses.

People are getting angry, some of them wanting back the “good old” prosperity, while others (and hopefully the majority) are realizing the real cost of capitalism. More and more people are standing up against corruption and demanding a new form of society - a society of justice. But every day the current government proves that its main aim is to save their own and their friend’s ass. A loan from the International Monetary Fund (IMF) has been granted, most likely leading to the common aftermaths of an IMF loan: the privatization of social systems as the health care and the education system, and more destruction of the Icelandic wilderness.

Weekly demonstrations
For more than 2 months people have gathered weekly in a park in front of the parliament. The first protests demanded that the government would “break its silence” about the current situation. People were tired of not even being told about what was happening and what the government was doing about it.

But soon people realized that it was not enough to ask the government to speak, so the protests took up another and more radical demand: the resignation of the government and new elections as soon as possible. The government has completely ignored this demand and people are getting more and more angry.

Anarchists and other radical leftists have come to most of the protests, but not to protest against the economic situation, not to ask the government for solutions, not to ask for new elections, not to ask any member of the government or parliament or any other official institution to do anything to “solve” the crisis we are facing. But to spread anarchistic and anti-capitalistic information among people, analyse the problems of authority and capitalism and to encourage Icelandic people to take direct action against the forces of corruption.

Burning of bank flags and “hanging” of a capitalist
During a protest in front of the prime minister’s office in late October, the flags of two Icelandic banks were burned. A group of anarchists, probably the biggest in Icelandic history at that time, shouted anarchistic slogans, pointing out capitalism as the real problem. Until then, capitalism seemed to be a ban-word among the protesters. The flag burning caught the interest of foreign media, e.g. CNN which showed the burning in their news show later the same evening. An event like this had not happened in Iceland for a long time.

A week later, a big demonstration parade went through the center of Reykjavík, demanding the resignation of the government. Anarchists, which grew bigger and stronger every week, joined the march with banners, black flags, leaflets about direct actions, and anarchistic slogans. While other protesters chanted “Away with the government”, anarchists shouted “Never again government!”

When the parade arrived at the park where weekly speeches took place, a group of people climbed a big fence and hung a doll of a capitalist. Again foreign media captured the performance on tape and screened it around the world.

A couple of meters away from the park where the protests take place, a Food Not Bombs groups had been giving away food every Saturday for the last 8 or 9 months. Food Not Bombs has for sure had its effect of the walking-by Icelanders, whose interest in alternative solutions to the problems of capitalism is beginning to pique.

Soon, hundred protesters surrounded the parliament to help the anarchist to get away from the police, who had already arrested a mate of his. After a bit of a struggle with the police, people managed to help the flag-man (like he later became known as) to get down off the roof and de-arrested him more than once. One could feel some change in the air.

Illegal arrest
Less than a week later, on a Friday night, the police arrested the flag-man. He was in the middle of a research trip to the parliament, organized by his university, when some parliament staff recognized him and called the pigs.

The man had been arrested two years before, for an action with the environmental direct action campaign Saving Iceland, protesting against the building of a big dam, Kárahnjúkavirkjun, in the eastern higlands. For this action he had got sentenced and fined, but refused to pay the fine and instead insisted on sitting in jail for 18 days. But after only four days of his jail-sentence he was “thrown out” because of lack of space in the prison.

Now, the police stated that the man would have to sit the other 14 days of the sentence. However, Icelandic legal procedure requires at least 3 weeks notice for finishing a prison sentence, which the police failed to do.

People claimed that the police's goal was to “take out” an activist who was likely to take more actions during the upcoming weekly demonstration. So, the next day, during the protest which 10.000 people had joined, another protest was announced, this time in front of the police station later that day.

The protest got even hotter, red paint and eggs were thrown at the station and on the riot squad which now had formed a chain in front of the station. A lot of people were peppersprayed, including the flag-man’s mother and young kids down to 16 years old. In the end, the flag-man was payed out of the prison by an unknown person. The flag-man came out were he was celebrated like a hero. He thanked people for the support but encouraged people to use their energy for something else: a revolution!

The Invasion of the Central Bank
A week after the riots by the police station, the weekely protest was a little more chilled. Instead people hoped for something big taking place the upcoming Monday, December 1st, the day of Iceland’s sovereignty.

1st of December used to be a free day in Iceland but couple of years ago the proletariat movement disclaimed it´s right. This 1st of May people were encouraged not to pay their bills, not show up in work and come to a big outdoor meeting on a big hill close to the government offices and the Central Bank. Few speeches took place, most of the including some nationalistic piffle which the radicals answered with a slogan: “No nationalism - International solidarity!”

After the meeting was formally over the word on the street was that more radical action was going to take place. Suddenly a big group of people marched to the Central Bank and entered the first entrance.

The entrance was completely full of people shouting and demanding that Davíð Oddsson, the chairman of the Central Bank board and a former prime minister, would resign. Few policemen had closed the second entrance but people shouted at them, asked in “what team” they were in, telling them to join the public, leave the entrance and let the people in. Suddenly the police left the entrance, the people cheered and opened the door to the second entrance.

Pepper Spray Again?
The second entrance became completely full as well as the first one, but behind big glass doors the riot squad had formed a chain of c.a. 30 pigs, armed with shields, clubs and pepper spray. Again, instead of speaking to the people, the pigs started shaking their spray cans, forcing to use it against the people it they would not leave.

People started banging on the door, shouting slogans against the Central Bank and the police. After a while, when a police officer had several times threatened to use the pepper spray, people decided to sit down peacefully and not stand up until Davíð Oddsson would resign. The action stood over several hours and had it’s peaks when people stood up, lifted up their hands to show they were unarmed and challenged the police to leave, open the doors and let the people bring Oddsson out.

Into the parliament
A week later, last Monday December 8th, thirty people went in to the Icelandic parliament, heading to the inside balcony were the public is legally allowed to sit, watch and listen to what takes place there. The group announced that the parliament no longer served it’s purpose and the government should therefor resign right now, the other MP’s should use their time for something more constructive.

Only two persons got to the balcony and shouted at the MP’s and ministers to leave the building. Quickly they were brutally removed by a police officer, while the rest of the group was stuck in a staircase inside the building. The parliamentary session was delayed and all the MP’s left the room.

Meanwhile the protesters were brutally handled by security guards and police, which ended up arresting 7 people, most of them for housebreaking. But like said before, the public is allowed to enter the parliament balcony.

A government meeting delayed with human chain
The next morning, 30 people had gathered in front of the prime minister’s office were a government meeting was supposed to take place. The people had formed a human chain blockading the two entrances of the house. When ministers started to show up, the police had already arrived and started to try to remove the chain. The people resisted heavily and read out a statement sent out by the group.

The statement said that the aim of the action was to “prevent the ministers from entering the house and therefor stop further misuse of power. Money has controlled people on the cost of their rights and the authorities and their cliques have manipulated finance for their own benefits. That manipulation has not entailed in a just society, just world. Time of action has dawn, because a just society is not only possible, but it is our duty to fight for it.”

With the help of the police, all the ministers got in, but heard the statement and were under big pressure from the media. They were not prepared for questions and came out badly when asked. The government meeting was delayed because of the actions.

Two were arrested, one for entering a police line and the other one for sitting in front of the police car which was about to drive the other arrested one to the police station. More people sat on the street and it took the police quite a long time to get out of the street. Only when a police officer gave the driver an order to “just drive hard”, the driver did so and nearly drove over two persons.

One of the biggest newspapers in Iceland, DV, reported the brutal behavoiur of the police. The paper’s journalist and photographer were both attacked by the police, as well as noticing when a police punched a protester in the face, while he lay on the street. Most other media did not dare to report the brutal behaviour.

A left wing website, Smugan, told about a police officer who was asked by the protesters if he would have protected Hitler. His answer was simple: “Yes, if it would have been my duty.”

Source: Aftaka
Images from the events described in this article can be found here. 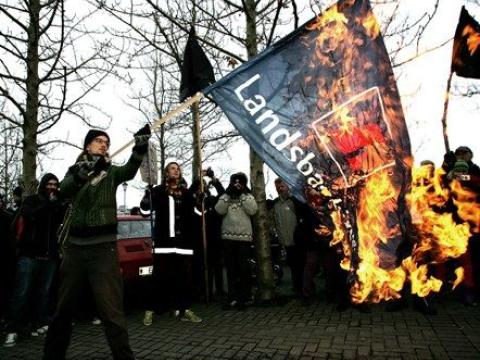 Images from the social unrest following the collapse of the banking system in Iceland in 2008. More… 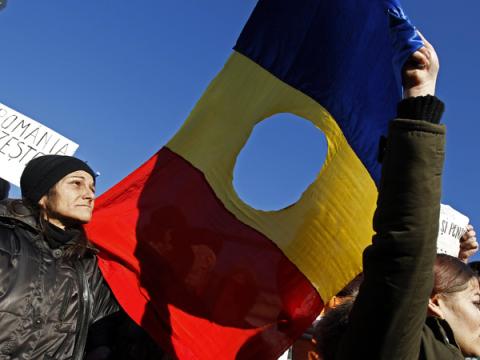 Romanians have said, 'enough is enough', and have taken to the streets in cities across the country, demanding an end to austerity measures. The… 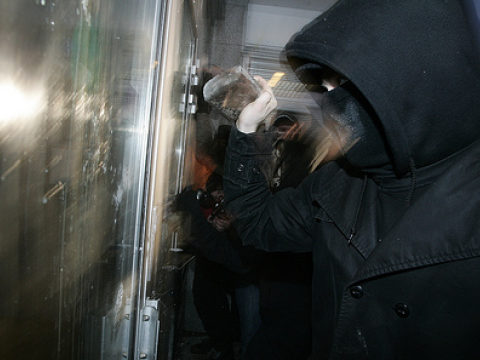